Pay Attention To The Drummer!

“Ringo is vastly underrated. The drum fills on the song ‘A Day In The Life‘ are very complex things. You could take a great drummer today and say, ‘I want it like that.’ He wouldn’t know what to do.”
~Phil Collins

“Ringo has influenced drummers more than they will ever realize or admit. He laid down the fundamental rock beat that drummers are playing today and they probably don’t even realize it.”
~Kenny Aronoff

“I swear he never varied the tempo. He played that back beat and never got off it. Man, you couldn’t have moved him with a crane. It was amazing.”
~D.J.Fontana

“Playing without Ringo is like driving a car on three wheels.”
~George Harrison

“The fill is the art of the drummer that happens in the moment. That’s always been the way with me. I can’t think about it. I don’t play drum parts. I have no idea how it’s gonna turn out. I don’t say, ‘Oh, 16 bars in, I’ll do that.’ I have no idea at all what I’m going to do. It just happens.”
~Ringo Starr

Pay Attention To The Drummer!
A (Long) Beatles Medley 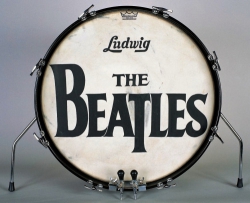