Never Letting Up Is The Point

In today’s Washington Post, columnist Sally Jenkins put into words what legendary Tennessee basketball coach Pat Summitt was all about. The most powerful of these words, however, were not written by Jenkins. They were written by Summitt 34 years ago. 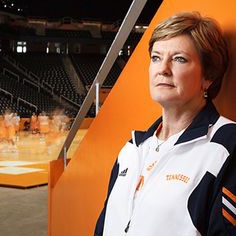 Coach Summitt passed away this morning but her words will linger forever.

For more than two decades, I’ve been asked what Pat Summitt is really like, and failed to answer the question, for the simple reason that most words aren’t large enough to capture her. Paltry one-dimensional terms can’t describe the roiling, sparkling ocean of a person that Pat was. I know of just a few words that really summarize her, and it turns out they are deceptively simple, and they are her own.

They follow below in a letter to a young University of Tennessee freshman named Shelia Collins, on the occasion of starting her first game. It illustrates exactly why more than 50 of her players, young and old, rushed to her bedside, drove all night, flew across the country, slept on floors, and sat in the hallways of a retirement home, where they passed the time playing bean bag games with seniors, just to see her and whisper a few words in her ear.

It’s impossible to peruse it without finally understanding Pat, the soul-stretching generosity at the heart of her, and the degree to which she tried to live out her values. It’s dated Nov. 22, 1982:

Shelia, This is your first game. I hope you win for your sake, not mine. Because winning’s nice. It’s a good feeling. Like the whole world is yours. But it passes, this feeling. And what lasts is what you’ve learned. And what you’ve learned about is — life. That’s what sport is all about — life!

There’s just no telling. Too much depends on chance, on how the ball bounces.

I’m not talking about the game. I’m talking about life. But it’s life that the game is all about. Just as I said, every game is life, and life is a game. A serious one. Dead serious. But here’s what you do with serious things. You do your best. You take what comes.

You take what comes and you run with it.

Winning is fun … Sure.

But winning is not the point.

Wanting to win is the point.

Not giving up is the point.

Never letting up is the point.

Never being satisfied with what you’ve done is the point.

The game is never over. No matter what the scoreboard reads, or what the referee says, it doesn’t end when you come off the court.

The secret of the game is in doing your best. To persist and endure, “to strive, to seek, to find, and not to yield.”

I’m proud to be your Coach,