Nothing “Happy” About It

These heroes are dead. They died for liberty. They died for us. They are at rest. They sleep in the land they made free, under the flag they rendered stainless, under the solemn pines, the sad hemlocks, the tearful willows, and the embracing vines. They sleep beneath the shadows of the clouds, careless alike of sunshine or of storm, each in the windowless Place of Rest. 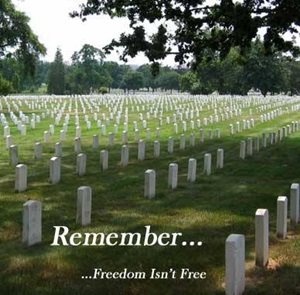 There are some who will argue that Memorial Day is happy, given the freedoms we enjoy. They say it’s perfectly alright to say “Happy Memorial Day” as a greeting over the coming three-day weekend.

Radio stations mark the occasion to promote a weekend of “Beaches, Music and Barbecues!” “We’re your Memorial Day station with everything you need to kick off the summer in style!”

There is nothing remotely “Happy” about Memorial Day. It is a day to be commemorated, not celebrated. It is supposed to be a day of quiet reflection, remembrance, tribute and rendering honors to those who have given their lives to guarantee you the freedom to be able to take full advantage of the rights their deaths secured for you.

It’s bad enough that Memorial Day is supposed to be commemorated on May 30th … not May 27th, 28th, 29th or May 31st. It makes no difference on what day of the week the 30th falls, that’s when Memorial Day is supposed to be observed. This year we are fortunate that the 30th landed on a Monday, but as a rule, that solemn tradition ended over fifty years ago.
That’s because the United States Congress, in 1968, passed the Uniform Monday Holiday Act, which moved four holidays, including Memorial Day, from their traditional dates to a specified Monday in order to give Americans 3-day weekends. After all, what’s more important … one-hundred-plus years of American tradition or one more 3-day weekend?

Most of them were teenagers or in their twenties. Many of them left behind a spouse after being married for a very short period of time. Some of them left behind infant children who grew up never knowing one of the two people who brought them into this world. All of them had plans for a full and long life, but they interrupted those plans because they knew that serving their country, and the risks that commitment entailed, was more important than life itself.

As Americans, we need to remember why Memorial Day is special. It’s not about picnics, trips to the beach, or a countdown of the 100 top summer songs. It’s not about ball games, car deals or summer clothing sales. It’s about honor, duty and the ultimate sacrifice. It’s about people who decided that the United States was worth dying for.

Freedom is just a fancy word to many but to those who risked everything and to those who lost their beloved warriors and have only their names on a gravestone left to them, freedom is the crown. It is their crown but it is we who get to wear it. They earned it for us all to wear. Let us use our freedoms well and honorably.