1859 – Jean-Francois Gravelet, a Frenchman known professionally as Emile Blondin, became the first daredevil to walk across Niagara Falls on a tightrope.
Blondin crossed a cable about two inches in diameter and 1,100-feet long with only a balancing pole to protect him from plunging into the dangerous rapids below. The feat, which was performed 160 feet above the Niagara gorge just down river from the Falls, was witnessed by some 5,000 spectators.

1863 – Arriving at the small town of Gettysburg late in the morning, Brigadier General John Buford and his men (1st Division of the Cavalry Corps) spotted A.P. Hill’s Confederate III Corps along the road from Cashtown, just west of Gettysburg.
After deploying his two brigades to the west and north of Gettysburg, Buford sent pickets out several miles on Chambersburg Pike, and proceeded to interview local citizens.
By the time the sun dropped beneath the South Mountain ridgeline, Buford was aware that all of Lee’s army was no more than a day’s march from his position.
Whereas that morning his prediction of battle had encompassed some “field” within his view, he now could be more specific – Buford warned brigade commanders Colonel Thomas Devin and Colonel William Gamble that he felt sure the enemy would “come booming in the morning.”
The importance of Buford’s leadership and tactical foresight cannot be overstated. His small force of 2,700 men stood alone between the rebels and the hills outside the town. Buford realized that the high ground south of the town would be key in any battle fought in the area.
The next morning, his vastly outnumbered men, stretched in a half-circle close to 4 miles long, fought a two and half hour holding action against close to 8,000 men under Confederate Major General Henry Heth, and they fought long enough to allow Union Major General John Reynolds’ I Corps to arrive on the field.

1882 – Charles J. Guiteau was hanged in Washington, D.C. for the assassination of President James Garfield.
On the morning of July 2, 1881, Guiteau – a failed (and clearly insane) evangelist, insurance salesman, and attorney – had shot President Garfield twice in the back as he entered the Baltimore and Potomac Railway station in Washington, D.C. The president died two months later from infections related to the injury.
As he was arrested after shooting Garfield, the assassin had yelled, “I am a Stalwart of Stalwarts,” a reference to the Stalwarts of the Republican Party, loyal supporters of former President Ulysses S. Grant, who lost the nomination to Garfield in 1880.
Guiteau, an ardent supporter of Grant, had switched his allegiance to Garfield, and for this support, he expected he would be rewarded with the position of consul to Paris “on account of my service during the [election] and as a personal tribute for my efforts.”
When that was rejected, Guiteau believed it was “God’s will that I kill the President in order to restore peace in the Republican Party.”

1908 – To put it into its most basic terms; at 7:17 a.m. (local time), the forest in Siberia, near the Podkamennaya Tunguska River, exploded. It literally exploded.
Eighty million trees were instantly flattened. The explosion, equivalent to 10-15 million tons of TNT, produced a fireball over 50 miles wide and left 850 square miles of scorched earth. It released energy equivalent to 185 Hiroshima atomic bombs.
Leonid Kulik, a Russian mineralogist famous for his research into meteorites, made several expeditions to the site. He could not determine a cause for the explosion but he did note that whatever caused it, there was no crater left behind.
Recent studies have shown that the Tunguska explosion was caused by the airburst of an asteroid about 5-to-10 miles above the surface of the earth.
Astrophysicist Wolfgang Kundt has a slightly different theory. He proposed that the Tunguska event was caused by the release and subsequent explosion of 10 million tons of natural gas from within Earth’s crust.
The basic idea is that natural gas leaked out of the crust and then rose to its equal-density height in the atmosphere; from there, it drifted downwind, in a sort of wick, which eventually found an ignition source such as lightning. Once the gas was ignited, the fire streaked along the wick, and then down to the source of the leak in the ground, resulting in the explosion.
Whatever caused it, two things are indisputable:
1 Dust from the explosion hovered over Europe, reflecting light that was bright enough for Londoners to read at night by it.
2 The “Tunguska event” remains the most powerful sound in history.

1921 – President Warren G. Harding appointed former President William Howard Taft Chief Justice of the United States.
During the 1920 election campaign, Taft supported Harding and was among those asked to come to the president-elect’s home to advise him on appointments. Harding casually asked if Taft would accept appointment to the Supreme Court. Taft had a condition for Harding – having served as president, he would accept only the chief justice position.
When he was sworn in on July 11, he became the first and to date only person to serve both as president and chief justice. 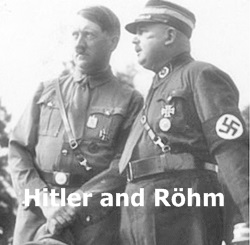 1934 – In Germany, Adolf Hitler ordered a bloody purge of his own political party, assassinating hundreds of Nazis whom he believed had the potential to become political enemies in the future.
The leadership of the Nazi Storm Troopers, whose four million members had helped bring Hitler to power in the early 1930s, was especially targeted.
Alleging that Ernst Röhm (chief of staff of the Nazi Storm Troopers) was plotting a putsch, Hitler ordered a massacre. Röhm and many more leaders of the SA were shot by members of Heinrich Himmler’s SS.
Hitler’s other perceived enemies were also murdered, including the last chancellor of the Weimar Republic, Kurt von Schleicher; Gregor Strasser, who until 1932 had been second only to Hitler in the Nazi Party; Bavarian ex-separatist Gustav von Kahr; conservative critic Edgar Jung, and Catholic professor Erich Klausener.
The Night of the Long Knives was a turning point for the German government. It established Hitler as the supreme administrator of justice of the German people, as he put it in his July 13 speech to the Reichstag.

1936 – Margaret Mitchell’s Gone With The Wind, one of the best-selling novels of all time and the basis for the blockbuster 1939 movie, was published.
While the book drew some criticism for its romanticized view of the Old South and its slaveholding elite, its epic tale of war, passion and loss captivated readers far and wide.
By the time Mitchell (holding her novel in the photo) won the Pulitzer Prize for Fiction in 1937, a movie project was already in the works. The film was produced by Hollywood giant David O. Selznick, who paid Mitchell a record-high $50,000 for the film rights to her book.

2001 – Chet Atkins, guitarist, songwriter, and record producer, who helped create the country music style that came to be known as the “Nashville Sound”, died of colon cancer at the age of 77.
One of the finest guitarists of the past 100 years and a producer with a distinctive vision, Atkins fused country and pop together in a manner which spread the former into the reaches of America it had previously been unable to break.
“Mr. Guitar” won a total of fourteen Grammys in addition to a Lifetime Achievement Award, was a nine-time Instrumentalist of The Year (Country Music Association), was inducted into the Country Music Hall of Fame in 1973, and in 2002, was posthumously inducted into the Rock and Roll Hall of Fame.