“Historical investigation has for its aim to fix the order and character of events throughout past time and in all places. Those who cannot remember the past are condemned to repeat it.”
~George Santayana

April 30, 1789: George Washington was inaugurated as the first president of the United States. The inaugural ceremony was performed on the balcony of Federal Hall on Wall Street, and a large crowd cheered after he took the oath of office. The president then retired indoors to read Congress his inaugural address, a quiet speech in which he spoke of “the experiment entrusted to the hands of the American people.” The evening celebration was opened and closed by 13 skyrockets and 13 cannons.

April 30, 1803: Representatives of the United States and France concluded negotiations for the Louisiana Purchase, a massive land sale that doubled the size of the young American republic.
The United States agreed to pay $11,250,000 and assumed claims of its citizens against France in the amount of $3,750,000. In exchange, the United States acquired the vast domain of Louisiana Territory, some 828,000 square miles of land which comprised most of modern-day United States between the Mississippi and the Rocky Mountains, with the exceptions of Texas, parts of New Mexico, and other pockets of land already controlled by the United States.
In October, Congress ratified the purchase, and in December 1803 France formally transferred authority over the region to the United States. The acquisition of the Louisiana Territory for the bargain price of less than three cents an acre was Thomas Jefferson’s most notable achievement as president.

April 30, 1900: Jonathan Luther “Casey” Jones was killed when his passenger train, the Cannonball Express, collided with a stalled freight train at Vaughan, Mississippi. The train had left from the Poplar Street Station in downtown Memphis, Tennessee on its way to Canton, Mississippi. The Cannonball Express was running at about 75 miles per hour toward Vaughan, and traveling through a 1.5-mile left-hand curve that blocked Jones’ view. Once he rounded the bend, Jones spotted the stalled train, reversed the throttle and slammed the airbrakes into emergency stop, but “Ole 382” quickly plowed through a wooden caboose, a car load of hay, another of corn, and half way through a car of timber before leaving the track. He had reduced his speed from about 75 miles per hour to about 35 miles per hour when he hit. He was the only one killed in the wreck, but his quick thinking saved the lives of passengers from serious injury or death. 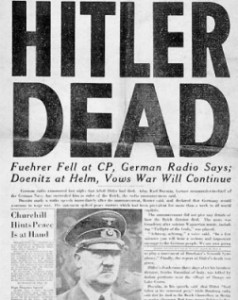 April 30, 1945: Holed up in a bunker under his headquarters in Berlin, Adolf Hitler committed suicide by swallowing a cyanide capsule and shooting himself in the head.
By July 1944, several German military commanders had acknowledged their imminent defeat and plotted to remove Hitler from power so as to negotiate a more favorable peace. Their attempts to assassinate Hitler failed, however, and in his reprisals, Hitler executed over 4,000 fellow countrymen.
In January 1945, facing a siege of Berlin by the Soviets, Hitler withdrew to his bunker to live out his final days. Located 55 feet under the chancellery, the shelter contained 18 rooms and was fully self-sufficient, with its own water and electrical supply. Though he was growing increasingly mad, Hitler continued to give orders and meet with such close subordinates as Hermann Goering and Josef Goebbels. He also married his long-time mistress Eva Braun just one day before their joint suicides.
In his last will and testament, Hitler appointed Admiral Karl Donitz as head of state and Goebbels as chancellor. He then retired to his private quarters with Braun, where he and Braun poisoned themselves before Hitler also shot himself with his service pistol.
Only eight days later, on May 8, 1945, the German forces issued an unconditional surrender, ending Hitler’s dreams of a “1,000-year” Reich, leaving Germany to be carved up by the four Allied powers.