“What we won when all of our people united just must not now be lost in suspicion, distrust, selfishness, and politics among any of our people. Believing this as I do, I have concluded that I should not permit the Presidency to become involved in the partisan divisions that are developing in this political year.”
~President Lyndon B. Johnson
March 31, 1968 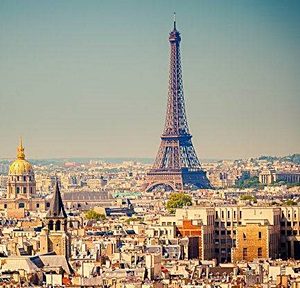 1889 – French engineer Alexandre Gustave Eiffel unfurled the French flag from atop the Eiffel Tower to mark its completion.
Built especially for the 1899 World’s Fair, the tower – at a height of 1,063 feet – was the tallest structure in the world at the time.
Eiffel celebrated by the completion by leading a group of government officials to the top observation deck, 906-feet above the ground. Because the lifts were not yet in operation, the ascent was made by foot up the 1,710 steps, taking over an hour to reach the deck.
At 2:35 pm, Eiffel hoisted a large flag to the accompaniment of a 25-gun salute fired at the first level.
The tower was not opened to the public until May 15, nine days after the opening of the World’s Fair. Even then, the lifts had not been completed, but the tower was an instant success with the public, Nearly 30,000 visitors made the long climb to the top before the lifts finally entered service on May 26.
Deluxe Apartment In The Sky Factoid: Gustave Eiffel – a man who craved publicity – soaked up the praise, but found another way to add to his prestige by building a small apartment near the top of the structure, garnering him the envy of the Paris elite in addition to his new fame.
Eiffel’s 1,000 square foot apartment (shown below) included a living room with a table, a couch, a piano and three small desks, a kitchen, and a bathroom with a sink. Without a bedroom, this dwelling was primarily designed to comfortably accommodate notable guests. 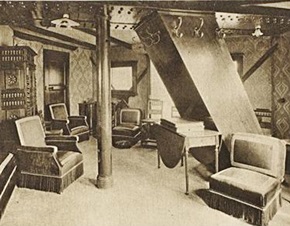 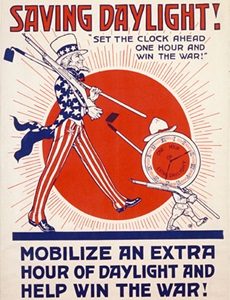 1918 – Daylight Saving Time went into effect in the United States for the first time.
During World War I, in an effort to conserve fuel, Germany began observing DST on May 1, 1916. The rest of Europe soon followed. The plan was not adopted in the United States until the Standard Time Act of March 19, 1918, which set summer DST to begin on March 31, 1918.
Though the official reason was fuel saving – America had entered World War I the previous year – the U.S. Chamber of Commerce was the major backer of the change because they said Americans getting out of work while it was still light out meant they would be more likely to go out shopping in the evening.
Golf ball sales skyrocketed during Daylight Saving Time. Baseball was a huge early supporter, too, because there was no artificial illumination of parks, so to get school kids and workers to ball games with the extended daylight, they were able to schedule later start times
Many considered Daylight Saving Time to be, if nothing else, a good health policy, given the extra time people had to be outdoors.
However, the idea was unpopular with farmers because it meant they had less time in the morning to get their milk and harvested crops to market. 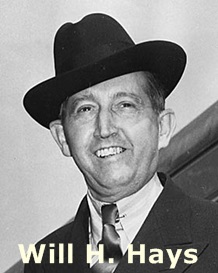 1930 – The Motion Picture Production Code was put into effect, after being accepted by the Motion Picture Producers and Distributors of America.
Also known as the Hays Code – after Will H. Hays, who was the president of MPPDA – it imposed strict guidelines on the treatment of sex, crime, religion and violence in film for the next thirty-eight years.
Among the “don’ts” in the code were “Pointed profanity, including the words “God,” “Lord,” “Jesus,” “Christ” (unless they be used reverently in connection with proper religious ceremonies), “hell,” “damn,” and every other profane and vulgar expression, however used, is expressly forbidden.”
Damn It Factoid: It was quite an accomplishment to get “Frankly Scarlett, I don’t give a damn” from 1939s Gone With The Wind past the Production Code Administration.
It was – after a lengthy battle between producer David O. Selznick and Code Administrator Joseph Breen – kept in because the dreaded four-letter word stayed true to the original novel. 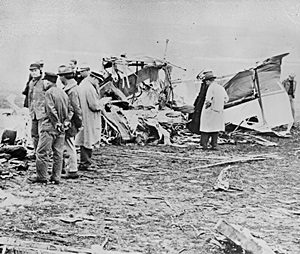 1931 – Transcontinental & Western Airlines Flight 599, en route from Kansas City to Los Angeles, crashed near Bazaar, Kansas, killing eight, including University of Notre Dame head football coach Knute Rockne.
An investigation determined one of the plane’s wooden wings had become moist over time, causing the glue connecting the wing to the body to weaken, allowing the wing to separate
Rockne, 43, was on his way to Los Angeles to participate in the production of a movie (The Spirit of Notre Dame) after stopping over in Kansas City to visit two of his children who were attending a boarding school in the city.
Rockne’s .881 career winning percentage (105-12-5) at Notre Dame remains the best ever among major college coaches, and his three national titles and five unbeaten and untied seasons only add to his legacy. 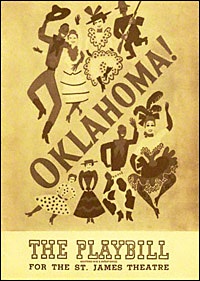 1943 – Rodgers and Hammerstein’s Oklahoma! opened at the St. James Theatre on Broadway.
The production ran for five years (2,212 performances), finally closing on May 29, 1948.
The Tony Awards and other awards now given for achievement in musical theatre were not in existence in 1943, and therefore the original production of Oklahoma!received no theatrical awards.
The 1955 film adaptation, starring Gordon MacRae, Shirley Jones (in her film debut), Rod Steiger, James Whitmore and Eddie Albert, made up for that by winning two Academy Awards. 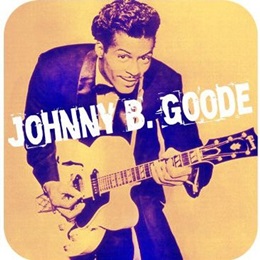 1958 – Chess Records released Chuck Berry’s Johnny B. Goode.
The song’s story arc tracked Berry’s real-life rise from a humble unknown to a world-famous superstar.
But Berry took liberties with the details. Unlike “Johnny”, Berry did not grow up in Louisiana.
He used his childhood address – 2520 Goode Avenue in St. Louis – in his protagonist’s name, and unlike Johnny, he could read and write quite well, studying hairdressing and cosmetology at night school.
Space Factoid: In 1977, the song was included on the Golden Records launched into space onboard Voyager 1 as the sole representative of rock and roll music. In 1986, astronomer Carl Sagan, the man who chaired the selection committee for NASA, wrote a letter to Berry on the occasion of the legend’s 60th birthday.
“When they tell you your music will live forever, you can usually be sure they’re exaggerating. But Johnny B. Goode is on the Voyager interstellar records attached to NASA’s Voyager spacecraft – now two billion miles from Earth and bound for the stars. These records will last a billion years or more. Happy Birthday, Chuck.”

Guitar Factoid: The opening guitar riff of Johnny B. Goode is essentially a note-for-note copy of the opening single-note solo on Louis Jordan and His Tympany Five’s Ain’t That Just Like A Woman, played by guitarist Carl Hogan in 1946. 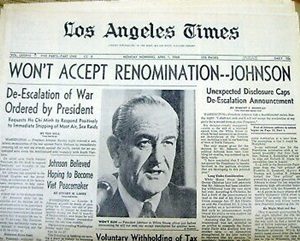 1968 – President Lyndon Johnson shocked the country by announcing he would not run for another term of office.
Nineteen days earlier, Johnson had narrowly defeated Senator Eugene McCarthy in the New Hampshire primary. Four days after that, Four days later, Senator Robert F. Kennedy of New York entered the race.
Internal polling by Johnson’s campaign in Wisconsin, the next state to hold a primary election, showed the President trailing badly.
For all his legislative achievements (Civil Rights Act of 1964, the Voting Rights Act of 1965, Medicare and Medicaid), Johnson had become the face of America’s divisions.
Conservatives felt Johnson had done too much, too quickly, overloading the system with big-government programs that trampled on individual liberties.
Liberals viewed Johnson as the corrupt wheeler-dealer who had lied America into the disastrous, bloody Vietnam quagmire.
In addition, although it was not made public at the time, Johnson had become more worried about his failing health and was concerned that he might not live through another four-year term.
On March 31, Johnson spoke to the nation of “Steps to Limit the War in Vietnam”. He then announced an immediate unilateral halt to the bombing of North Vietnam and announced his intention to seek out peace talks anywhere at any time.
At the conclusion of his speech, citing a “division in the American house,” he made his stunning announcement. 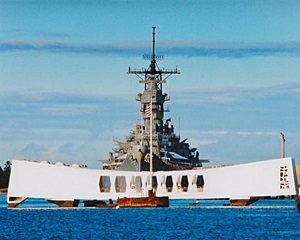 1992 – The USS Missouri, the last active United States Navy battleship, was decommissioned in Long Beach.
The battleship is best remembered as the site of the surrender of the Empire of Japan on September 2, 1945, which ended World War II.
In January 1995, she was struck from the Naval Vessel Register, and docked at Ford Island, Pearl Harbor, where she stands guard over the USS Arizona Memorial.
In the photo above, the bow of the Missouri faces the sunken Arizona, symbolizing the beginning and the end of WWII for the U.S. 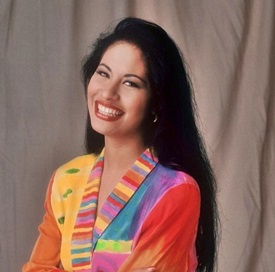 1995 – Singer Selena Quintanilla-Pérez, known professionally as Selena, was shot to death in Corpus Christi, TX, by the founder of her fan club. She was just 23.
In 1992, Selena released Entre a Mi Mundo which peaked at #1 on the Billboard Regional Mexican Albums chart. One of its singles, Como la Flor, became one of her most popular signature songs.
Selena had gone to a room in the Days Inn motel in Corpus Christi to confront Yolanda Saldivar, the former president of her fan club, and the president of Selena Etc., a boutique, salon, and clothing store.
Saldivar, suspected by Selena and her family of embezzling $60,000 from the fan club and the boutiques using forged checks, was on the verge of being fired. After a heated discussion, Saldivar shot her once in the back with a 38-caliber revolver.
The singer staggered to the motel lobby for help before collapsing and being rushed to a hospital. Saldivar was quickly cornered in the motel parking lot and for nearly 10 hours kept SWAT teams at bay as she sat in a pickup truck with a gun to her head, threatening suicide before finally surrendering.
At her trial in October, a jury found Saldívar guilty of first-degree murder. She was sentenced to life in prison with the possibility of parole in thirty years. She will become eligible for parole on March 30, 2025. 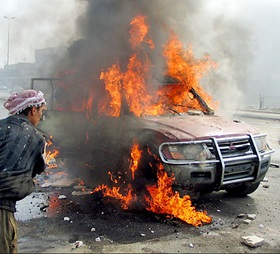 2004 – Four American civilian contractors were killed in Fallujah, Iraq when frenzied crowds attacked their convoy as they were conducting a delivery for food caterers.
The four armed contractors, employed by private military company Blackwater USA, were beaten and burned, with their charred corpses then dragged through the city streets before two of the victims were left hanging from a bridge crossing the Euphrates River.
The ambush led to the First Battle of Fallujah, a U.S.-led operation to retake control of the city. However, the battle was halted mid-way for political reasons, an outcome described as either a stalemate or an insurgent victory.
Seven months later, in November 2004, a second attempt at capturing the city, the Second Battle of Fallujah, proved successful.
Intelligence reports concluded that Ahmad Hashim Abd al-Isawi was the mastermind behind the attack. He was captured in 2009 and executed by hanging in 2010.
WARNING! As Peter Jennings of ABC News says on this video, “some of these pictures are pretty repugnant but they are the reality of war.”
Actually, they are more than repugnant. They are brutal so watch at your own discretion.