When the Beatles made their first appearance on the Ed Sullivan Show in 1964, they featured a 23-year old drummer. He laid down a steady beat, displayed a marvelous sense of humor, and along with his bandmates, made all the girls scream.

While he was often regarded as the least important band member – the last to join and with only a few songs to his name – many critics now agree Ringo Starr’s contribution to the quartet was, on the contrary, a vital key to its phenomenal success. 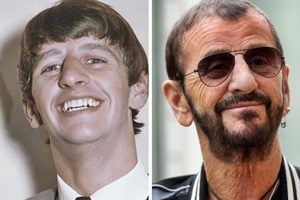 Flash forward 56 years. That lovable moptop is now 80 years old, has eight grandchildren and one great-grandchild, and is still making music. Today we celebrate his life – and his endless supply of energy – with a look back at an amazing career.

The Beatles recorded their version of this Carl Perkins song for their Beatles for Sale album (Beatles ’65 in the U.S.).
While John Lennon had always handled the lead vocal during live performances prior to the group recording it, Ringo’s love for country music made it a natural for him to sing in the studio.
“It was a case of finding vehicles for me with the Beatles,” Starr recalled. “That’s why we did Honey Don’t on the album. It was comfortable; my little featured spot.”

This song first showed up on the Beatles 1966 Revolver album (and as the flip side to Eleanor Rigby where it peaked at #2 on the Billboard Hot 100). But it became even better known as the title song to the 1968 Beatles’ animated film.

In the minds of many Beatle fans, this was Ringo’s best song in the Beatles repertoire by a mile. If people weren’t beginning to reckon Ringo as a serious Beatles contributor by 1967, they damn well should have been.

This song came about when Ringo left the White Album sessions in 1968 and went on a boating trip with his family in Sardinia. The boat’s captain offered him an octopus lunch, but he turned it down.
It was then that the captain began to tell him everything he knew about octopuses, and how they travel along the sea bed looking for shiny objects and stones with which to build gardens.
Ringo thought about how tranquil it would be to live down there amongst your friends in the calm waters – the opposite of the chaos and internal conflict he was going through with the Beatles at the time.
It showed up on the Abbey Road album, the last album the band ever recorded.

And then came the solo years…

This single was released in April 1971 and was a commercial success, peaking at #1 in Canada and #4 in both the U.S. and UK singles charts. It was produced by George Harrison, who also helped write the song, although only Starr was credited. The single featured Harrison on guitars, Klaus Voormann on bass, Gary Wright on piano, and of course, Ringo on the drums.

This song was released as the lead single off Starr’s Ringo album in 1973. Starr co-wrote the song with George Harrison. Although the two of them collaborated on other compositions, it is the only song officially credited to the pair. A signature tune for Starr as a solo artist, it topped the singles charts in the U.S., Canada and Australia, and #8 in England.

This song off Ringo’s Ringo Rama album in 2003 was a tribute to Harrison following George’s 2001 death. The song title refers to Harrison’s Within You, Without You on the Beatles Sgt. Pepper’s Lonely Hearts Club Band album.
Starr said he had “remained closest to [George] of all the former Beatles following the break-up in 1970,” and the song conveyed “how I miss him in my heart and in music.”
The song featured Eric Clapton on lead guitar.

The last two surviving Beatles combined in 2010 for this song off Ringo’s Y Not album. The ode to friendship featured Paul McCartney echoing Starr’s vocals one beat behind. You can hear a little “old” in the voices, so it’s like two old friends embracing their past … “when I walk with you, everything will be fine.”