In 1969 and 1970, Creedence Clearwater Revival generated one of the most amazing runs of hits in American music history: from Proud Mary to Green River, Bad Moon Rising to Travelin’ Band and Lookin’ Out My Back Door.

But for all their success with those John Fogerty–penned classics, CCR never held the #1 spot on the Hot 100. All five of those hits peaked at #2. That’s a Billboard chart record they hold to this day; the most #2 songs without a #1 hit.

Throw in four more Top 10 singles (and B-sides that would have been hit singles on their own) and it’s easy to see why in that two-year period, no band in the U.S. outsold the group that may have looked (thanks to John Fogerty’s fondness for flannel shirts) and sounded (with lyrics about bayous, bullfrogs, catfish, and the Mississippi River) like they came from Louisiana, but were actually from the San Francisco Bay area.

When they ventured into the political arena with socially conscious lyrics about topics including the Vietnam War, they never changed their appearance for the sake of success. Fogerty continued to wear his beloved flannel shirts, even when the band played at Woodstock in 1969.

Their compilation album, Chronicle The 20 Greatest Hits, originally released in 1976, is still on the Billboard 200 album chart and reached the 500-weeks mark in December, 2020. It has been awarded 10x platinum, indicating it has sold over 10 million copies. 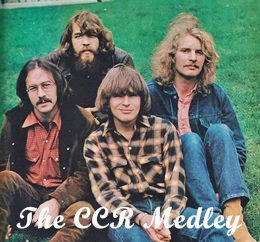