I don’t care who you voted for. I really don’t care. That is your business and yours alone. But I am amazed and disturbed by the violent reaction to Donald Trump’s election. We have a wonderful system in this country called elections. On Tuesday, over 119 million Americans went to the polls and exercised their right to vote their conscience, and whether you like the results or not, Trump will be your next president. 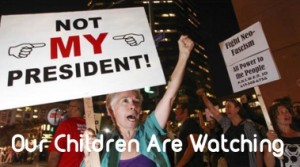 I understand that millions are upset. Hell, I was upset by the choices we had but in the end, I participated, and after voting, waited for the results. Some of the candidates I voted for won their races. Others didn’t, and in the presidential race, my personal choice certainly didn’t. That’s the way it goes. You vote your conscience and accept the outcome. The United States of America is not some Third World country where revolution is a way of life. We are better than that. In America, the majority rules – and if you’re tempted to remind me that Hillary Clinton won the popular vote, I’m getting to that.

We are not – or at the very least, should not – base our voting decisions on what we see on some late night talk show or Facebook posts. I would like to think anyone who played a part in Tuesday’s election did some research on their own before they went to the polls. However the sad reality is far too many didn’t.

Talk shows, social media, and in particular, the mainstream media, all played a huge role in shaping opinions because too many were too lazy to do it themselves. They believed everything they saw or heard, and in the case of Facebook, well, goodness, if you see it on Facebook, it must be true! Here’s your reality check, folks. It isn’t.

I promised to get to that popular vote controversy. While Clinton did indeed garner more popular votes than Trump (59.9 million to 59.7 million), Clinton won California by 2.5 million and New York by 1.5 million. If you’re going to tell me those additional 4 million votes from two states are an indication that the majority of Americans preferred Clinton, I ain’t buying it.

During the campaign, one commercial I saw (constantly) was Role Models in which several of Trump’s incendiary comments were being watched by children on their television. The message was clear. Our children are watching, and Hillary Clinton’s closing comment in that commercial was “We need to make sure that they can be proud of us.”
One of the many comments I have seen since the election is “What will I tell my children” about the outcome? Well, if you’re one of the people in the photograph above – or one of the thousands marching in the streets – please tell me what you will say to them about that because they are still watching.