Time to wrap our look back at the music of 1964 … and there’s something extra (and special) included in this medley. Wendy Plante is going to make not one, but two appearances between songs as she reprises her days as a DJ on the Oldies Stream from yesteryear!

If you cheated and looked down at the list of songs, you noticed there are three Beatles songs but if you think that’s too much, consider how popular – to say nothing about important – they were that year.
I actually considered playing nothing but Beatles songs today but in the end I decided to point out the wide variety of tunes we all listened to.

As always, I have placed each song’s peak chart position in parentheses beside the artist name.

One Quick Note: I am going to take a couple of weeks off (and before anyone panics, it’s got nothing to do with my health. I feel GREAT!) I just want some time away from this computer. I promise I’ll be back! 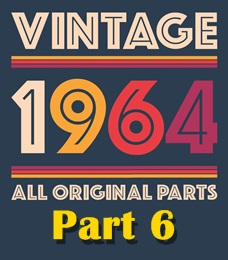