“What a night. After the broadcast, as I tried to get back to the St. Regis where we were living, I was blocked by an impassioned crowd of news people looking for blood, and the disappointment when they found I wasn’t hemorrhaging. It wasn’t long after the initial shock that whatever public panic and outrage there was vanished. But, the newspapers for days continued to feign fury.”
~Orson Welles

Performed by Orson Welles
and The Mercury Theatre On-The-Air

On Sunday, October 30, 1938, millions of radio listeners were shocked when radio news alerts announced the arrival of Martians. They panicked when they learned of the Martians’ ferocious and seemingly unstoppable attack on Earth. Many ran out of their homes screaming while others packed up their cars and fled.

Although what radio listeners heard was only a portion of Orson Welles’ adaptation of the well-known book by H. G. Wells, many of the listeners believed what they heard on the radio was real. Thousands of listeners panicked nationwide, not realizing it was just a radio play, even though disclaimers were announced before and during the production.

Studies later indicated that many listeners missed the repeated notices that the broadcast was entirely fictional, partly because the Mercury Theatre (an unsponsored “cultural” program with a relatively small audience) ran opposite the popular Chase & Sanborn Hour over the Red Network of NBC.

About 15 minutes into the Chase & Sanborn program, the first comic sketch ended and a musical number began, and many listeners presumably began tuning around the dial at that point.
According to the American Experience program The Battle Over Citizen Kane, Welles knew the schedule of the Chase & Sanborn show, and scheduled the first report from Grover’s Mill at the 12-minute mark to heighten audience confusion.

As a result, some listeners happened upon the CBS broadcast at the exact point “the Martians emerged from their spacecraft”. 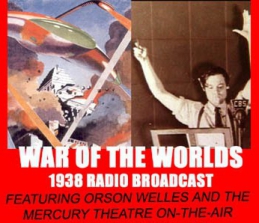