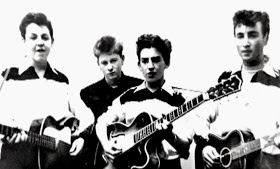 1958 – The Quarrymen performed at the opening of The Morgue Skiffle Center, Oakhill Park, Broadgreen, Liverpool. The club was run by 18-year-old Alan Caldwell, whose group Alan Caldwell’s Texans also performed. Caldwell later adopted the stage name Rory Storm and his group became known as The Hurricanes. Drummer Ringo Starr would later join the Hurricanes before signing on with The Beatles.
The club, which had no sanitary facilities, was located in the cellar of a huge old Victorian house that had previously been a home for retired nurses. It held 100 people and was lit by a single, blue bulb and a fluorescent strip light. An electric fan provided the only ventilation. The club was closed by police a month later. 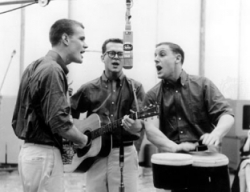 1959 – The Kingston Trio narrowly averted death on a concert tour when their rented twin-engine airplane had to make an emergency hard landing in a farm field near South Bend, Indiana – less than six weeks after Buddy Holly, Ritchie Valens and The Big Bopper had died in a plane crash in a corn field in Iowa.
Trio members Bob Shane, Nick Reynolds and Dave Guard, along with bass player David “Buck” Wheat, had been on the way from St. Louis to a sold-out gig at Notre Dame University. In a snowstorm, the plane had used more fuel than the pilot had anticipated, and because of adverse runway conditions, the South Bend airport denied permission for the plane to land. With instruments malfunctioning and the fuel tank nearly empty, the pilot skillfully brought the plane down to 200 feet and aimed for a farm field. Although the plane skimmed a fence on its approach, the pilot managed to expertly bring the plane to a halt, thereby avoiding injuries.

1963 – Billy J. Kramer with The Dakotas recorded ‘Do You Want To Know A Secret’. 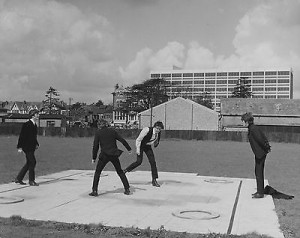 1964 – The Beatles filmed the ‘Can’t Buy Me Love’ romp on a helicopter pad for A Hard Day’s Night. They also filmed the scene at the end of the movie where The Beatles and “Paul’s grandfather” (Wilfrid Brambell) take off in a helicopter, with promotional photos falling from the rising craft. 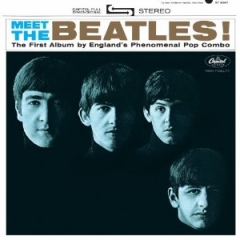 1964 – Sales of the ‘Meet the Beatles’ reached a record 3.5 million copies. Billboard reported that sales of Beatles singles currently accounted for 60 percent of the singles market.

1965 – Eric Clapton left The Yardbirds, claiming their musical direction was “too commercial”. 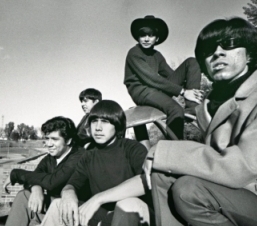 1966 – Question Mark & The Mysterians recorded ’96 Tears’ in a home studio in Bay City. Michigan. 500 copies were distributed locally on a record label called Pa-Go-Go Records. Within months, the record had caught on nationally, and the group licensed the song to Cameo Parkway Records. By October, it was the #1 song on the Billboard singles chart. 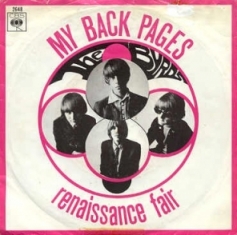 1967 – Six members of Sounds, Inc. were brought into the Abbey Road studio to add the horn parts for The Beatles’ ‘Good Morning Good Morning’. 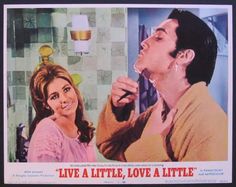 1968 – Elvis Presley began filming his 28th movie, Live A Little, Love A Little (wisely changed from its original title which was the book the film was based on, Kiss My Firm But Pliant Lips). It had a more mature tone than other Presley musicals with strong language, drug references, and an implied sexual encounter.

1968 – The Byrds recorded ‘Nothing Was Delivered’ and ‘You Got A Reputation’. 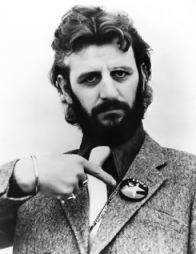 1973 – Ringo Starr recorded ‘I’m The Greatest’. While Starr and George Harrison were recording the song at Sunset Sound Recorders Studio in Los Angeles (along with Billy Preston and Klaus Voormann), John Lennon – who wrote it – stopped by and joined in on piano and harmony vocal.
“They (John and George) were just looking for something to do, just playing together and having a good time. It only lasted 20 minutes. Their years of working together made it so easy.” … Billy Preston
The song marked the only time more than two ex-Beatles recorded together in the same studio between the band’s break-up in 1970 and the recording of ‘Free As A Bird’ in 1995. While it’s true that Harrison, Starr and McCartney worked together on Harrison’s tribute to John Lennon (‘All Those Years Ago’) in 1980, there were never more than two of them in the same studio at the same time.

1976 – The Jackson 5 moved from Motown to Epic Records. Motown responded by claiming the label owned the rights to the group’s stage name, so the quintet simply dropped the ‘5’ and performed as The Jacksons. 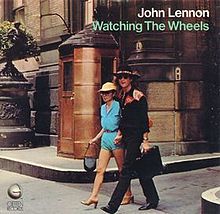 1981 – John Lennon’s ‘Watching The Wheels’ was posthumously released. The photograph was taken by Paul Goresh in front of Lennon’s home in New York City. Goresh also took the infamous photo (in virtually the same exact location) of Lennon signing a copy of ‘Double Fantasy’ for his soon-to-be assassin on December 8, 1980.

2000 – Mary Wilson and Cindy Birdsong announced that they would not be participating in Supremes’ “Return To Love” reunion tour. Negotiations began to crumble when Wilson was told that she would have no input into the show and was offered $500,000 (later increased to $2 million) for the tour. Ross was to receive $500,000 per night. Wilson, who felt herself, Ross and Birdsong should be paid equally and have equal input into the show, rejected the offer, saying, “the train had left the station.”
Ross soldiered on with Lynda Laurence and Scherrie Payne, two women who joined the Supremes long after she left in 1969, but in some cases, they sang to more empty seats than fans. As an example, when they played in Columbus, Ohio, there were fewer than 3,000 people in a 22,000-seat arena. After playing fourteen dates of the 30 scheduled dates, the tour was canceled. 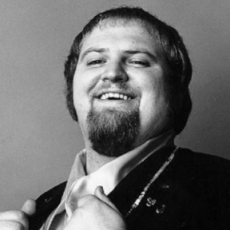 1998 – Judge Dread (born Alexander Hughes – British reggae singer/songwriter – ‘Come Outside’) died of a heart attack at the age of 52.
Although often dismissed as a novelty act, Judge Dread was actually a groundbreaking artist. Not only did he put more reggae records onto the U.K. chart than anyone else (Bob Marley included), he was also the first white artist to actually have a reggae hit in Jamaica. On the other hand, he also holds the record for having the most songs banned by the BBC, 11 in all, which incidentally is precisely the number of singles he placed on the charts.

2002 – Marc Moreland (guitarist with Wall Of Voodoo – ‘Mexican Radio’) died of liver and kidney failure at the age of 44.

2006 – Black Sabbath, Blondie, Miles Davis, Lynyrd Skynyrd and The Sex Pistols (who refused to attend) were inducted into the Rock and Roll Hall of Fame. Herb Alpert and Jerry Moss (founders of A&M Records) were also inducted for Lifetime Achievement.

2009 – Alan W. Livingston (Capitol Records executive who signed Frank Sinatra to the label in the fifties and signed the Beach Boys and The Band in the sixties) died of natural causes at the age of 91.
As president of Capitol in 1963, Livingston agreed to release The Beatles’ ‘I Want To Hold Your Hand’ after having rejected all their previous singles as unsuitable for the U.S. market despite Capitol being owned by The Beatles’ U.K. record company, EMI.

Compiled by Ray Lemire ©2015 RayLemire.com. All Rights Reserved.
You may not, under any circumstances, reproduce, record, publish, republish, post, transmit, publicly display, publicly exhibit or distribute any articles or photographs on RayLemire.com without obtaining the express written consent of the Operator.