January 17, 1990 marked the fifth induction ceremony for the Rock and Roll Hall of Fame. The artists selected were certainly worthy of the honor.

The Rock and Roll Hall of Fame Foundation was established in 1983 by Ahmet Ertegun, founder and chairman of Atlantic Records. Things went smoothly until individuals such as Jann Wenner, Suzan Evans, and writer Dave Marsh started to monopolize nominations with their own personal favorites. Today, the selection process has become a joke.

There, now that I have that out of my system, I’ll get back to 1990. During that event, Hank Ballard was inducted as a solo artist although he clearly was not. His band, The Midnighters, had to wait until 2012 for induction when they, along with The Miracles (Smokey Robinson), The Famous Flames (James Brown), The Comets (Bill Haley), The Blue Caps (Gene Vincent), and The Crickets (Buddy Holly), were inducted as performers by a special committee due to the controversial exclusions when their lead singer was inducted. 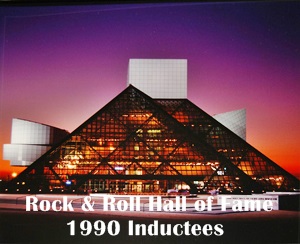