There were six more rock and roll deaths between September and October last year. Some names may not be familiar to you but their music should be.

The first name on the list is Bob Moore, a renowned session bass guitarist who was part of the “Nashville A Team” (the country music equivalent to the rock and roll “Wrecking Crew” in Los Angeles). Moore played on virtually every song Patsy Cline ever recorded, but I have chosen another artist’s song to honor him because his bass runs on that song are legendary.

The other name you may not recognize is Ron Tutt, the drummer who played in Elvis Presley’s touring and recording band (and later in Neil Diamond’s).

As for the other four names, well, just listen … you should remember them. Oh, and if the last song doesn’t put chills down your spine, well, I don’t know what to say. 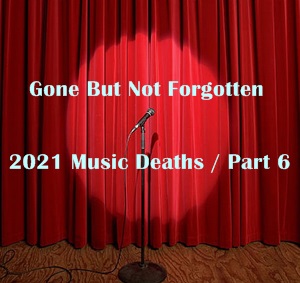