They were not a “hip” band. They rose to fame around the same time as fellow Liverpool natives the Beatles but did not have the staying power of the Fab Four or other contemporaries.

But from 1964-1967, Gerry & The Pacemakers were a musical force, both in America and the UK. Some fans may recall them for two or three hit songs but this medley, put together to honor Gerry Marsden on the news of his passing on January 3 at the age of 78, proves they were a lot more than “a couple of hits.”

The band’s cover of Rodgers and Hammerstein’s “You’ll Never Walk Alone” became a favorite of fans attending Liverpool Football Club games, and the track which closes this medley became the team’s official anthem and a massive #1 hit in England.

Marsden, the group’s lead singer, guitarist and songwriter, never left his native Liverpool. He was never involved in any type of rock and roll scandal. He remained married to his wife Pauline for 55 years and perhaps most importantly, he never lost his award-winning smile or his reputation as one of the most lovable musicians who ever walked the planet. 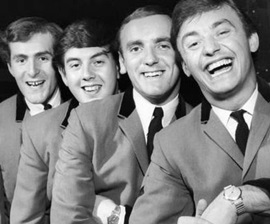