Yesterday it was all British hits from 1964 and today it is a 10-song medley from the Americans. Maybe it’s just me but after comparing the two, I still believe the British music was more compelling that year, although to be fair, six of these songs did hit #1 and another was never released as a single in America (but should have been).

Once again I have placed each song’s peak chart position in parentheses beside the artist name. 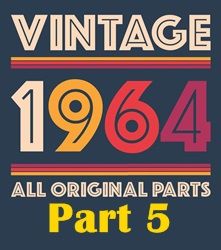