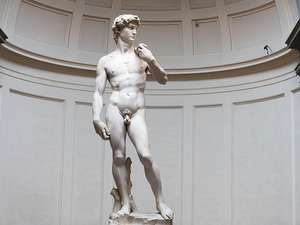 1501 – Italian artist and sculptor Michelangelo began carving the 17-foot statue of David. It had taken 40 men four days to move the massive 12,000 pound statue the half mile from Michelangelo’s workshop into the Piazza della Signoria.
Michelangelo broke with artistic tradition by portraying David before his battle with Goliath rather than afterwards as seen in earlier representations.
Upon completion in 1504, the statue was placed in a public square, outside the Palazzo Vecchio, the seat of civic government in Florence, in the Piazza della Signoria.
It was moved to the Galleria dell’Accademia, Florence in 1873, and later replaced at the original location by a replica. 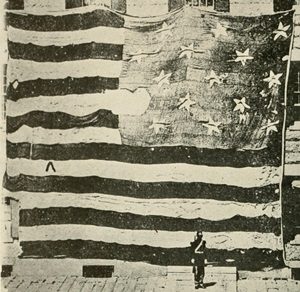 1814 – Francis Scott Key had an eventful evening. You might even call it a “banner” night!
During the War of 1812, Key, accompanied by the British Prisoner Exchange Agent Colonel John Stuart Skinner, dined aboard the British ship HMS Tonnant.
Skinner and Key were there to negotiate the release of prisoners, one of whom was Dr. William Beanes, who had been arrested after jailing marauding British troops who were looting local farms. Skinner, Key, and Beanes were not allowed to leave the Tonnant because they had become familiar with the strength and position of the British units and with the British intent to attack Baltimore.
Thus, Key was unable to do anything but watch the bombarding of the American forces at Fort McHenry during the Battle of Baltimore on the night of September 13.
At dawn, Key was able to see the massive American flag (shown above) still waving.
Key began to write on the back of a letter he had in his pocket. Back in Baltimore, he composed more lines and finished the poem; Defence of Fort M’Henry, which was published in the American and Commercial Daily Advertiser on September 21.
I think we all know what happened with that poem.
Key Factoid: He was a lot more than just a poet.
He was a high profile lawyer who crossed paths with many famous people. For example, he was part of Andrew Jackson’s “Kitchen Cabinet,” unofficial advisers who played a hugely influential role in that memorable era.
Eventually becoming U.S. Attorney for the District of Columbia, Key went on to prosecute the man who tried to kill Jackson in the country’s first presidential assassination attempt. 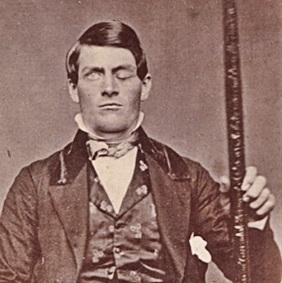 1848 – A Vermont railroad worker survived an iron rod being driven through his brain.
Phineas Gage, 25, was directing a work gang blasting rock while preparing the roadbed for the Rutland & Burlington Railroad south of the town of Cavendish, Vermont. Setting a blast entailed boring a hole deep into an outcrop of rock; adding blasting powder and a fuse; then using the tamping iron to pack sand, clay, or other material into the hole above the powder.
Around 4:30 p.m., his attention was distracted by his men working behind him. Looking over his right shoulder, and inadvertently bringing his head into line with the blast hole, Gage opened his mouth to speak; in that same instant the tamping iron sparked against the rock and the powder exploded.
Rocketed from the hole, the tamping iron – 1 1⁄4 inches in diameter, three feet seven inches long, and weighing 13 pounds – entered the left side of Gage’s face in an upward direction, just forward of the angle of the lower jaw. Continuing upward outside the upper jaw and possibly fracturing the cheekbone, it passed behind the left eye, through the left side of the brain, and out the top of the skull through the frontal bone.
Incredibly, almost immediately after the accident, Gage was conscious and able to talk, and insisted on walking to the cart that would take him into town to be treated. Despite his torn scalp and fractured skull, Gage remained lucid and rational during the ride and was able to speak with his attending physician. Just ten weeks after the accident, he returned to his Lebanon, NH home. 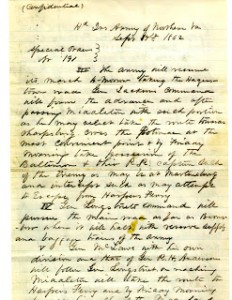 1862 – Sergeant John Bloss and Corporal Barton W. Mitchell of the 27th Indiana found a piece of paper wrapped around three cigars while the division rested in a meadow outside of Frederick, Maryland, which had served as the site of a Confederate camp a few days before.
The paper was addressed to Confederate General D.H. Hill. Its title read, Special Order No. 191, Headquarters, Army of Northern Virginia.
Realizing that they had discovered a copy of the Confederate operation plan, Bloss and Mitchell quickly passed it up the chain of command. Division adjutant general, Samuel Pittman recognized the handwriting on the orders as that of a colleague from the prewar army, Robert Chilton, who was the adjutant general to Robert E. Lee.
With this information, Union General George B. McClellan now knew that Lee’s forces were split into five parts and scattered over a 30-mile stretch, with the Potomac River in between. At least eight miles separated each piece of Lee’s army, and McClellan was just a dozen miles from the nearest Confederate unit at South Mountain.
Civil War historian Bruce Catton observed that “no general in the war was ever given so fair a chance to destroy the opposing army one piece at a time.”
McClellan squandered the opportunity. He believed that Lee possessed a far greater number of troops than the Confederates actually had, despite the fact that the Maryland invasion resulted in a high rate of desertion among the Southerners.
McClellan was also slow to respond to the information in the so-called Lost Order. He took 18 hours to set his army in motion, marching toward Turner’s Gap and Crampton’s Gap in South Mountain, a 50-mile long ridge that was part of the Blue Ridge Mountains.
It is no stretch to say if McClellan had promptly acted on the discovery which had been dropped in his lap, the bloodiest day in the entire Civil War – The Battle of Antietam, just four days later – might never have happened. 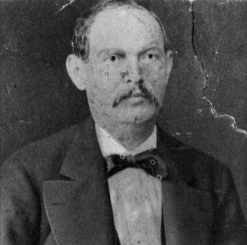 1899 – Henry Bliss became the first person in the United States to be killed in an automobile accident when he was struck by an electric-powered taxicab in New York City.

1946 – Amon Leopold Goeth, the commandant of the Krakow-Płaszow concentration camp in Plaszow in German-occupied Poland for most of the camp’s existence during World War II, was hanged at the Montelupich Prison in Krakow.
The 1993 film Schindler’s List in which Goeth was portrayed by Ralph Fiennes, depicted his brutal running of the Płaszow concentration camp. 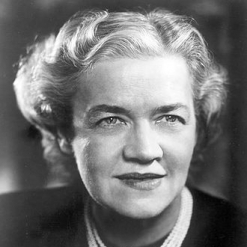 1948 – Margaret Chase Smith of Maine was elected to the U.S. Senate, becoming the first woman to serve in both houses of Congress. A moderate Republican, she is perhaps best remembered for her 1950 speech, “Declaration of Conscience,” in which she criticized the tactics of McCarthyism.
Smith was an unsuccessful candidate for the Republican nomination in the 1964 presidential election, but was the first woman to be placed in nomination for the presidency at a major party’s convention. 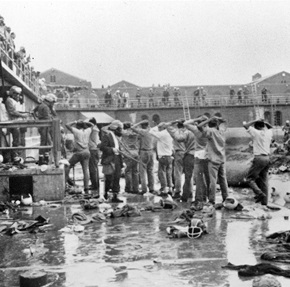 1971 – The four-day revolt at the maximum-security Attica Correctional Facility near Buffalo, New York, ended when hundreds of state police officers stormed the complex in a hail of gunfire.
New York Governor Nelson Rockefeller gave the order, with President Richard Nixon’s support, to overtake the prison.
Thirty-nine people were killed in the assault, including 29 inmates and 10 prison guards and employees held hostage since the outset of the ordeal. 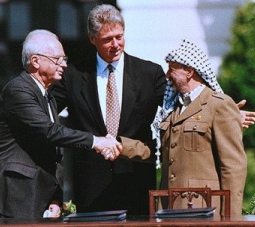 1993 – After decades of bloody animosity, representatives of Israel and Palestine met on the South Lawn of the White House and signed a framework for peace.
The Oslo Accords were officially signed at a public ceremony in Washington, D.C. in the presence of PLO chairman Yasser Arafat, Israeli Prime Minister Yitzhak Rabin and President Bill Clinton.
The “Declaration of Principles” was the first agreement between the Israelis and Palestinians towards ending their conflict and sharing the holy land between the River Jordan and the Mediterranean Sea that they both claim as their homeland.
Unfortunately, any momentum gained from the agreement was short-lived.
In 1998, Palestinian officials accused Israel of not following through on the troop withdrawals from Gaza and Hebron called for in the agreement.
Conversely, critics of the agreement said that Palestinian violence against Israeli citizens increased in their aftermath, coinciding with the increasing power of the Palestinian Authority.
The period of violence on both sides that ensued dashed any hopes of lasting peace, and the Israelis and Palestinians have not held substantive negotiations since. 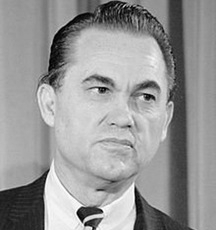 1998 – George Wallace, one of the most controversial politicians in U.S. history, died in Montgomery, Alabama, at the age of 79.
In his 1963 inaugural address, Wallace had promised his white followers: “Segregation now! Segregation tomorrow! Segregation forever!” Later that year, he was forced, under federal pressure, to end his blockade of the University of Alabama and allow the enrollment of African American students.
Despite his failures in slowing the accelerating civil rights movement in the South, Wallace became a national spokesman for resistance to racial change and in 1964 entered the race for the U.S. presidency.
Although defeated in most Democratic presidential primaries he entered, his modest successes demonstrated the extent of popular backlash against integration.
In 1968, he made another strong run as the candidate of the American Independent Party and managed to get on the ballot in all 50 states, drawing 10 million votes from across the country.
In 1972, Wallace returned to the Democratic Party for his third presidential campaign and, under a slightly more moderate platform, was showing promising returns when Arthur Bremer shot him on May 15.
Wallace was permanently paralyzed from the waist down. He remained in the hospital for several months, bringing his third presidential campaign to an irrevocable end. 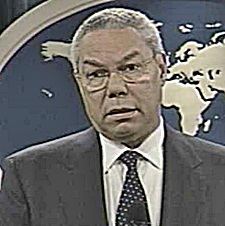 2001 – Secretary of State Colin Powell named Osama bin Laden as the prime suspect in the terror attacks on the United States.
“We are looking at those terrorist organizations who have the kind of capacity that would have been necessary to conduct the kind of attack that we saw on September 11,” Powell said. When a reporter asked if he was referring to bin Laden, Powell answered, “yes.”
Powell also said the Bush administration had begun to apply pressure to Pakistan, a country that had been accused of providing support for bin Laden and giving his militant Islamic organization the freedom to operate.