We have six musical events which took place on August 6, beginning in 1955 when a future Rock and Roll Hall of Fame artist released his first #1 hit (which may come as a surprise) and ending in 1993 when a female rocker released an album that started her meteoric climb to fame.
And in between those two, the Fab Four, Sly & The Family Stone, ABBA and Manfred Mann’s Earth Band marked the date with some musical magic of their own. 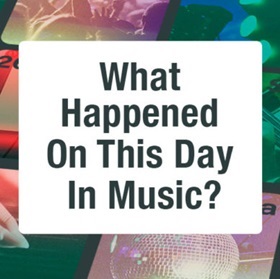 On August 6, 1955 (65 years ago today!), Elvis Presley released a song that would become his first #1 hit … and no, it wasn’t Heartbreak Hotel. That song was his first #1 on the Billboard Hot 100 but I Forgot To Remember To Forget reached #1 on the Billboard Country Singles chart first.
Elvis had recorded it on July 11 at Sun Studio in Memphis.
Released along with Mystery Train as Elvis’ last Sun single, the song spent a total of 39 weeks on the Billboard Country Chart, with five of the those weeks at the #1 spot.

On August 6, 1965 (55 years ago today!), EMI’s Parlophone label released the Beatles’ Help!, the soundtrack to the group’s second feature film.
The album contained the seven film soundtrack songs on one side and non-soundtrack recordings on the flipside.
The American version of Help! was released one week later but was significantly different from the UK version. It contained the seven songs from the film, but added six orchestral pieces from the soundtrack by The Ken Thorne Orchestra.

On August 6, 1969 (51 years ago today!), Sly & The Family Stone released Hot Fun In The Summertime.
The song peaked at #2 on the Billboard Hot 100 pop singles chart and is included in Rolling Stone magazine’s list of the “500 Greatest Songs of All Time”.

On August 6, 1974 (46 years ago today!), ABBA scored their first U.S. Top 10 hit when Waterloo reached its peak at #6.
The song had been written specifically to be entered into the 1974 Eurovision Song Contest (which it won) and when released as a single, shot to #1 in the UK, Belgium, Denmark, Finland, West Germany, Ireland, Norway, South Africa, and Switzerland.
They never looked back. Estimates of ABBA’s total record sales are over 150 million, making them one of the best-selling music artists of all time.

On August 6, 1976 (44 years ago today!), Manfred Mann’s Earth Band released Blinded By The Light, a cover version of a Bruce Springsteen song which had failed to chart when it was released in 1973.
The cover reached #1 on both the Billboard Hot 100 and the Canadian Singles charts, and became Springsteen’s only #1 single as a songwriter on the Billboard Hot 100.
His highest charting single as a solo performer was Dancing in the Dark in 1984, which reached #2 on the Hot 100.

On August 6, 1993 (27 years ago today!), Sheryl Crow released the Tuesday Night Music Club album.
It contained her breakout single All I Wanna Do which peaked at #2 on the Billboard Hot 100 and won a Grammy Award for Record of The Year.
In addition to its U.S. success, All I Wanna Do hit #1 in Australia and Canada, and reached the Top 10 in ten other countries.