July 27 is a very special date in music history. We had debut singles from future Hall of Fame inductees, the recording of a treasured classic (although the group that recorded it originally despised it), the debut single of one of rock’s best female singers (or was it a single by her group?), a powerful song about a research ship and its legendary captain, and a song that hit #1 on July 27 in 16 different countries. 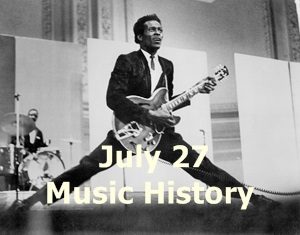 On July 27, 1955 (65 years ago today!), Chess Records released Chuck Berry’s debut single.
The mixture of hillbilly country, urban blues and hot jazz in Berry’s electric twang is where rock and roll guitar began – perfected in this two-minute and 20 second description of a car chase.
The single – originally titled Ida May – was changed by producer Leonard Chess who thought it was too rural. Chess came up with a new title, inspired by a Maybelline mascara box lying on the floor at the Chess studio. He deliberately altered the spelling to avoid a suit by the cosmetic company.
The song peaked at #5 on the Billboard Hot 100 and #1 on the R&B chart. The Rock and Roll Hall of Fame included Maybellene in its list of the “500 Songs That Shaped Rock and Roll.”

On July 27, 1957 (63 years ago today!), the Everly Brothers had the #1 song on the Cash Box Best Selling Record chart.
The debut single for the duo eventually peaked at #2 on the Billboard Hot 100 and hit #1 on the Billboard Country Singles chart.
Rolling Stone magazine included Bye Bye Love – written by Felice and Boudleaux Bryant – on their list of “The 500 Greatest Songs of All Time.”

On July 27, 1961 (59 years ago today!), the Tokens recorded The Lion Sleeps Tonight.
Mbube (Zulu for “lion”) was written by Solomon Linda, a South African singer of Zulu origin. Issued as a 78-rpm phonograph record in 1939, and marketed to black audiences, Mbube became a modest hit. By 1948, the song had sold over 100,000 copies in Africa and among black South African immigrants in Great Britain.
In 1949, Alan Lomax, then working as folk music director for Decca Records, brought the recording to the attention of Pete Seeger of the folk group The Weavers. Seeger thought they were saying “Wimoweh” on the original, and that’s what he wrote down and how it was recorded in English. They were actually saying “Uyimbube,” which means “You’re a Lion.”
The Weavers’ version credited the song as “Traditional” with arrangement by “Paul Campbell,” later found to be a pseudonym used by the Weavers in order to claim royalties.
It reached Billboard’s top ten and became a staple of The Weavers’ live repertoire, achieving further exposure on their best-selling The Weavers at Carnegie Hall album.
Hank Medress, Jay Siegel, and Phil and Mitch Margo, who made up The Tokens, had a Top 15 hit Tonight I Fell In Love in 1960, but didn’t have a record label in 1961. They auditioned for producers Hugo Peretti and Luigi Creatore by singing Wimoweh to them.
The producers were impressed by the performance but decided that the song needed new lyrics. With help from George Weiss, Hugo and Luigi rewrote the song, giving it the new title.
Jay Siegel was the falsetto lead singer and opera singer Anita Darien was brought in for the soprano during and after the sax solo. Her voice almost sounds like an instrument on the record.
The Tokens were so embarrassed by the new title and lyrics that they fought the release of the recording.
They shouldn’t have bothered. It turned out to be a #1 hit on the Billboard Hot 100.

And this is the original recording by Solomon Linda and The Evening Birds.

On July 27, 1968 (52 years ago today!), the Mamas & Papas released Dream A Little Dream Of Me.
Well, kind of….
The song was first recorded by Ozzie Nelson and His Orchestra, with vocal by Nelson, on February 16, 1931. During the summer of 1950, seven recordings of Dream A Little Dream Of Me were in release, with the versions by Frankie Laine and Jack Owens both reaching the U.S. Top 20.
The song was recorded for The Mamas & The Papas May 1968 album, The Papas & The Mamas with lead vocals by Cass Elliot.
In the album version, recorded with the Mamas and the Papas, a spoken introduction is heard mentioning a drink, and then concluding with the words: “And now, to sing a lovely ballad, here is Mama Cass.” Only the last part was heard on the single version of the song.
Cass did her own whistling, which is heard before the song’s fade.
By the time of the album’s release, there were strong indications that the group was set to disband. Having an opportunity to promote the group’s best-known member as a soloist, Dunhill Records issued a single release on this date with the credit reading – much to fellow group member John Phillips’ displeasure – “Mama Cass with the Mamas & the Papas”.
The single peaked at #12 on the Billboard Hot 100 but elsewhere – when the artist credit went solely to “Mama Cass” – it reached #11 in England, #13 in Ireland, and #8 in South Africa
Sad Timing Factoid: On July 27th, 1974 (46 years ago today), Cass Elliot sang it for the last time at a sold-out concert at London’s Palladium. Two days later, she died in her sleep due to heart failure and not because she choked on a ham sandwich (one of the most cruel rock and roll myths in existence).

Once again, if you want to hear the original version, here’s Ozzie Nelson’s 1931 recording.

On July 27, 1975 (45 years ago today!), John Denver released I’m Sorry / Calypso as a Double A-side single from his Windsong album.
After I’m Sorry fell out of the #1 position on the Billboard Hot 100, Calypso began receiving more airplay and peaked at the #2 spot on the chart.
The song was dedicated to Captain Jacques-Yves Cousteau and all those who served on his ship, Calypso.
I don’t know about you but I miss both the Captain and the man who sang this song about him.

On July 27, 1991 (29 years ago today!), Bryan Adams had the #1 song on the Billboard Hot 100 as well the #1 song in England, Canada, Ireland, Australia, France, and ten other countries.
The theme song for the film, Robin Hood: Prince of Thieves, it was nominated for the Academy Award for Best Original Song.
In England, it spent sixteen consecutive weeks at #1 on the UK Singles Chart, the longest uninterrupted run ever on that chart. It also spent seven weeks at #1 on the Billboard Hot 100 and nine weeks on top of the Canadian Singles Chart in Adams’ native Canada.