The eastern world, it is explodin’
Violence flarin’, bullets loadin’
You’re old enough to kill, but not for votin’
You don’t believe in war, but what’s that gun you’re totin’
~Barry McGuire
Eve Of Destruction 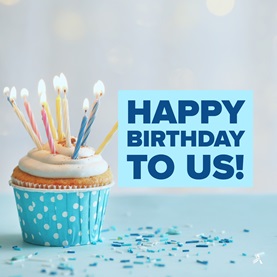 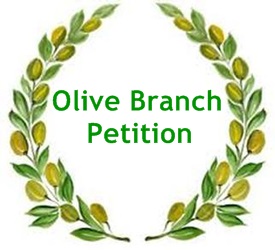 1775 – The Olive Branch Petition – a final attempt by the colonists to avoid going to war with Britain during the American Revolution – was adopted by the Second Continental Congress.
The purpose of the petition, which was formally signed on July 8, was to appease King George III and prevent the conflict between the colonies and the British government from escalating into a full blown war.
It began by explaining why the colonists had been rebelling against the British government, stating that after winning the French and Indian War, the government didn’t thank the colonists for their support and participation in the war and instead enacted new laws and taxes that seemed more like a punishment.
The petition asked the king to give the colonists their rights by repealing the unjust laws and taxes waged on them.
Richard Penn and Arthur Lee were sent to England to deliver the petition to the King and arrived in August of 1775. On August 21, 1775, the second copy of the petition was also sent to Lord Dartmouth, the Secretary of State for the colonies.
Meanwhile, John Adams wrote to a friend that the petition served no purpose, that war was inevitable, and that the colonies should have already raised a navy and taken British officials prisoner.
The letter was intercepted by British officials and news of its contents reached Great Britain at about the same time as the petition itself.
British advocates of a military response used Adams’ letter to claim that the petition itself was insincere
In August 1775, the colonies were formally declared to be in rebellion by the Proclamation of Rebellion, and the petition was rejected by Great Britain – King George had refused to read it before declaring the colonists traitors.
The king then cemented his stance on the rebellion on October 27 of that year when he gave a speech to Parliament during which he stated the two sides were at war and increased military efforts were now necessary to stifle the rebellion. 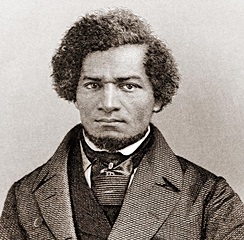 1852 – Abolitionist (and former slave) Frederick Douglass delivered his legendary What to the Slave is the Fourth of July? speech in Corinthian Hall, Rochester, New York, addressing the Rochester Ladies’ Anti-Slavery Society.
While referring to the celebrations of the Independence Day in the United States the day before, the speech explored the constitutional and values-based arguments against the continued existence of slavery in the United States.
“What have I, or those I represent, to do with your national independence? Are the great principles of political freedom and of natural justice, embodied in that Declaration of Independence, extended to us? What, to the American slave, is your 4th of July? I answer; a day that reveals to him, more than all other days in the year, the gross injustice and cruelty to which he is the constant victim.“ 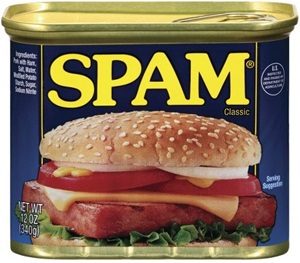 1937 – Intended to increase the sale of pork shoulder which was not a very popular cut, Hormel Foods introduced America to Spam.
According to the company’s Spam Museum, the name of the product was a portmanteau word for “spiced ham” but housewives who wanted cheap, quick meals requiring almost no prep, were hesitant to serve meat to their family that didn’t need to be refrigerated.
It didn’t take long for the U.S. military to find a use for the food innovation. Spam went global during World War II, when America shipped out over 100 million cans to the Pacific, where it made an inexpensive yet filling meal for U.S. troops.
It remains popular in areas where soldiers were stationed, especially in Hawaii, Guam and the Philippines. 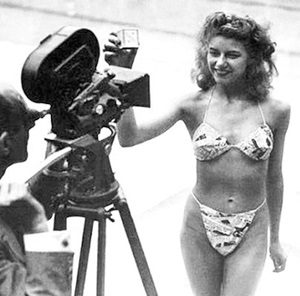 1946 – French designer Louis Reard unveiled a daring two-piece swimsuit at the Piscine Molitor, a popular swimming pool in Paris.
Reard was in competition with Jacques Heim in the high-stakes game of fashion swimwear. Heim called his product the “atom” and described it as “the world’s smallest bathing suit.”
Reard trumped his rival by claiming his design was the “smaller than the world’s smallest bathing suit.”
As shown above, Parisian showgirl Micheline Bernardini modeled the new fashion, which Reard dubbed “bikini,” inspired by a U.S. atomic test that took place off the Bikini Atoll in the Pacific Ocean earlier that week.
I go to great lengths to bring you the really important information. 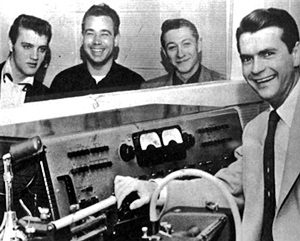 1954 – Elvis Presley recorded his first single – and it happened by mistake.
During an uneventful recording session at Sun Studios in Memphis, Presley, Scotty Moore (guitar) and Bill Black (upright bass) were taking a break between recordings when Presley started fooling around with an up-tempo version of Arthur Crudup’s song That’s All Right, Mama.
Black and Moore and joined in and producer Sam Phillips, taken aback by this sudden upbeat atmosphere, asked the three of them to start again so he could record it. The song was produced in the style of a “live” recording (all parts performed at once and recorded on a single track).
Phillips gave copies of the acetate to local disc jockeys Dewey Phillips of WHBQ, Uncle Richard of WMPS, and Sleepy Eyed John Lepley of WHHM.
On July 7, Dewey Phillips played That’s All Right (“Mama” was left off the record label when Elvis released it) on his radio show.
Interest in the song was so intense that Dewey reportedly played the acetate 14 times and received over 40 telephone calls.
The rest, as they say, is history. 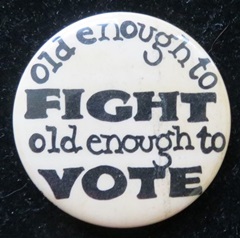 1971 – The Twenty-Sixth Amendment to the United States Constitution, lowering the voting age from 21 to 18 years, was formally certified by President Richard Nixon.
Dwight D. Eisenhower, who led the U.S. armed forces to victory in Europe in 1945, later became the first president to publicly voice his support for a constitutional amendment lowering the minimum voting age.
In his 1954 State of the Union address, Eisenhower declared, “For years our citizens between the ages of 18 and 21 have, in time of peril, been summoned to fight for America. They should participate in the political process that produces this fateful summons.”
In the late 1960s, with the United States embroiled in a long, costly war in Vietnam, youth voting rights activists held marches and demonstrations to draw lawmakers’ attention to the hypocrisy of drafting young men and women who lacked the right to vote.
In 1969, no fewer than 60 resolutions were introduced in Congress to lower the minimum voting age, but none resulted in any action.
The following year, when Congress passed a bill extending and amending the Voting Rights Act of 1965, it contained a provision that lowered the voting age to 18 in federal, state and local elections.
Though he signed the bill into law, President Nixon issued a public statement declaring that he believed the provision to be unconstitutional. “Although I strongly favor the 18-year-old vote,” I believe – along with most of the Nation’s leading constitutional scholars – that Congress has no power to enact it by simple statute, but rather it requires a constitutional amendment.”
On March 10, 1971, the U.S. Senate voted unanimously in favor of the proposed amendment. After an overwhelming House vote in favor on March 23, the 26th Amendment went to the states for ratification.
In just over two months – the shortest period of time for any amendment in U.S. history – the necessary three-fourths of state legislatures (or 38 states) ratified the 26th Amendment, and President Nixon signed it into law. 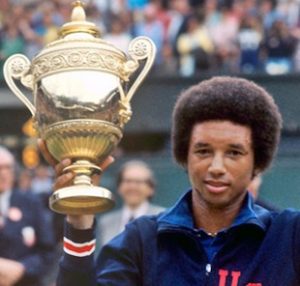 1975 – Arthur Ashe defeated the heavily favored Jimmy Connors to become the first black man ever to win Wimbledon, the most coveted championship in tennis.
Given no chance by the “experts” to win, Ashe systematically destroyed the brash 22-year-old Connors, 6-1, 6-1, 5-7, 6-4. 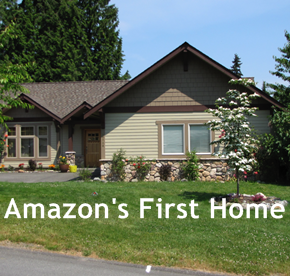 1994 – Amazon was founded by Jeff Bezos in Bellevue, Washington.
Setting up shop in the garage of his rental house (shown above), Bezos financed the company with $10,000 from his own pocket.
Actually, the company wasn’t originally called Amazon.com. It was first known as Cadabra, a play on the word abracadabra. However, the name was later changed because it was too often misheard as “Cadaver”.
The company initially started as an online marketplace for books but later expanded to sell electronics, software, video games, apparel, furniture, food, toys, jewelry … well, just about everything you could ever imagine.
In 2015, Amazon surpassed Walmart as the most valuable retailer in the United States by market capitalization. 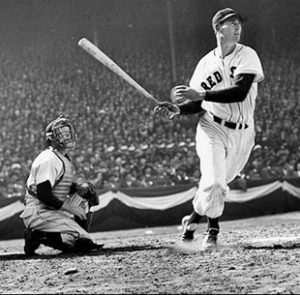 2002 – Baseball Hall of Fame player Ted Williams died of cardiac arrest at the age of 83.
Williams played his entire career with the Boston Red Sox from 1939 through 1960. He compiled a lifetime average over those 19 years of .344, the centerpiece, of course, being 1941 when he finished the season at .406, the last major leaguer to hit over .400.
Yes, the math doesn’t quite add up – 1939 to 1960 should have been 22 seasons – so here’s the explanation.
He missed three years during World War II when he was in the Navy air corps. And if you take into account the Korean conflict, during which he only went to bat 43 times in two years because of a stint as a Marine fighter pilot, you can see that war took a significant toll on his career numbers.
Those numbers include 521 home runs, 1,839 RBI, 2,654 hits, a career On Base Pct. of .484 (still a Major league record), a 19-time All-Star and a 2-time American League MVP. 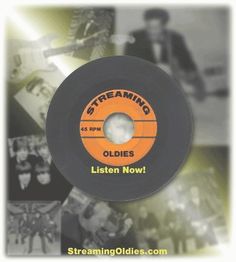 2005 – Time to pause for something personal.
Fifteen years ago today, Streamingoldies became a reality for me. The site has gone through several configurations – including the original logo shown above – but all these years (and over 14 million hits) later, it continues to run without one cent in advertising revenue.
It has turned into a very expensive hobby but one I will never regret. 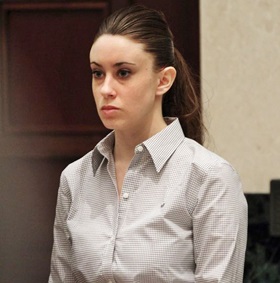 2011 – A jury in Orlando, Fla., found Casey Anthony, 25, not guilty of murder, manslaughter and child abuse in the 2008 disappearance and death of her 2-year-old daughter, Caylee.
The child was last seen June 16, 2008, but was not reported missing until July 15, when Casey Anthony’s mother tracked her daughter down and demanded answers regarding Caylee’s whereabouts.
Investigators searched for the child for five months, eventually finding Caylee’s skeletal remains in woods less than a mile from her grandparents’ Orlando home.
After nearly three years of legal maneuvers, Anthony’s capital murder trial began on May 24, 2011.
Prosecutors alleged that she killed Caylee by using chloroform and covering her nose and mouth with duct tape, and that she put her body in the trunk of her car before dumping it in the woods.
Defense attorney Jose Baez argued that Caylee drowned in the Anthony family pool on June 16, 2008, and that Casey Anthony and her father, George, covered up the death.
The jury found Casey not guilty of counts one through three regarding first-degree murder, aggravated manslaughter of a child, and aggravated child abuse, while finding her guilty on counts four through seven for providing false information to law enforcement.
She was sentenced to four years in jail and $4,000 in fines. (Two of the false information counts would later be thrown out in appeals court.) Anthony received credit for time served and good behavior. Having been imprisoned for three years and one day, she was released on July 17.