“On Chickasaw that morning
The light was dim
But by the slope of his shoulder
I knew that it was him
He raised up his rifle
And it chilled me to the bone
For his shot went wide
And mine, dear God, struck home”
‘The Ghost of Vicksburg’
~Barbara Keith / Doug Tibbles
The Stone Coyotes 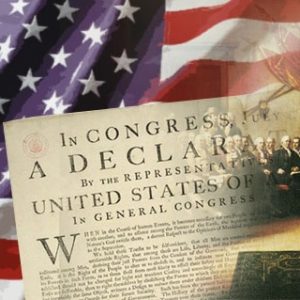 1776 – Two days after the Continental Congress had voted to approve a motion calling for separation from Britain, the Declaration of Independence was formally adopted by 12 of the 13 colonies after minor revisions (New York, the 13th colony, approved it on July 19). 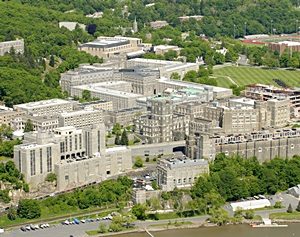 1802 – The United States Military Academy officially opened at West Point, NY.
Congress had formally authorized the establishment and funding of the school with the Military Peace Establishment Act of 1802, which President Thomas Jefferson signed on March 16.
In its early years, the academy featured few standards for admission or length of study. Cadets ranged in age from 10 years to 37 years and attended between 6 months to 6 years.
In 1817, Colonel Sylvanus Thayer became the Superintendent and established the curriculum, elements of which are still in use today. Thayer instilled strict disciplinary standards, set a standard course of academic study, and emphasized honorable conduct.
Known as the “Father of the Military Academy,” he is honored with a monument on campus for the profound impact he had upon the academy. 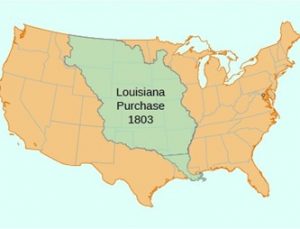 1803 – President Thomas Jefferson announced the Louisiana Purchase.
The purchase of the Louisiana Territory, an area of more than 828,000 square miles, doubled the size of the U.S. It was an extraordinary deal: $15 million – 4 cents per acre.
Eventually all or parts of 13 states of the United States were formed from the Louisiana Territory: Arkansas, Colorado, Iowa, Kansas, Louisiana, Minnesota, Missouri, Montana, Nebraska, North Dakota, Oklahoma, South Dakota, and Wyoming.
The U.S. had originally sought to purchase only the port city of New Orleans and its adjacent coastal lands for $10 million, but were astounded when Napoleon, facing the prospect of renewed warfare with the United Kingdom and desperate to fund his military, offered the entire territory. 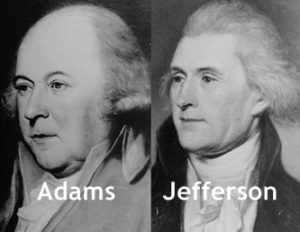 1826 – Former Presidents John Adams and Thomas Jefferson, who were once fellow Patriots and then adversaries, died on the same day within five hours of each other.
They were the last surviving members of the original American revolutionaries who had stood up to the British Empire and forged a new political system in the former colonies. However, while they both believed in democracy and life, liberty and the pursuit of happiness, their opinions on how to achieve these ideals diverged over time.
Adams, the second U.S. president, preceded Jefferson; it was during this time that their ideas about policy-making became as distinct as their personalities. The hot-tempered Adams was a firm believer in a strong centralized government, while the erudite Jefferson believed federal government should take a more hands-off approach and defer to individual states’ rights.
Adams was the first to break the silence. He sent Jefferson a letter dated January 1, 1812, in which he wished Jefferson many happy new years to come. Jefferson responded with a note in which he fondly recalled when they were fellow laborers in the same cause.
By remarkable coincidence, Adams and Jefferson both died on the 50th anniversary of the adoption of the Declaration of Independence.
At the age of 90, Adams’ last words were, “Thomas Jefferson survives.”
Jefferson had died five hours earlier at the age of 82. 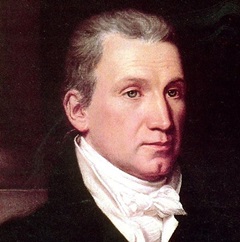 1831 – James Monroe, the 5th President of the United States, died from heart failure and tuberculosis at the age of 73.
He was the third president to die on Independence Day. 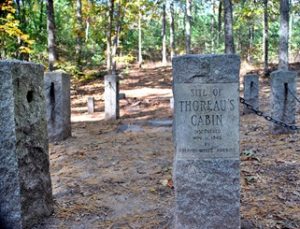 1845 – Henry David Thoreau embarked on a two-year experiment in simple living. Little did he know what was to come of that move.
He moved to a small cabin on land owned by Ralph Waldo Emerson in a forest around the shores of Walden Pond in Concord, Massachusetts. Thoreau’s account of his two years there, Walden, would become a touchstone of the environmental movement.
His book was not only a personal declaration of independence; it was also a social experiment, voyage of spiritual discovery, satire, and – to some degree – a manual for self-reliance. 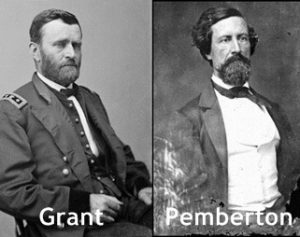 1863 – The Confederacy was torn in two when General John C. Pemberton surrendered to Union General Ulysses S. Grant after a 47-day siege at Vicksburg, Mississippi.
The city was the key to the Mississippi River and very nearly the last Confederate holdout on the “Father of Waters” by 1863. Federal assaults – two by the Navy and one by the Army – had been turned back three times in 12 months.
Grant’s army had constructed 15 miles of trenches and enclosed Pemberton’s force of 29,000 men inside the perimeter. It was only a matter of time before Grant, with 70,000 troops, would capture the city.
On the morning of July 3, Confederate General John C. Pemberton had sent a dispatch through the lines under a flag of truce asking for an armistice and a conference to discuss “terms of capitulation.” Pemberton used the usual rhetoric about wishing to “save the further effusion of blood” and how long he could continue to hold out.
Grant’s reply was blunt. “The useless effusion of blood you propose stopping by this course can be ended at any time you may choose by an unconditional surrender of the city and the garrison.”
With the negotiations going nowhere, a proposal was made that the garrison be paroled, not incarcerated as POWs. Grant initially rejected the proposal but allowed his officers to change his mind.
His decision to parole the Confederates was influenced by the prospect that sticking to his “unconditional surrender” terms would mean feeding and transporting 30,000 POWs.
Grant’s terms went off to Pemberton before 10 p.m. He gave the Confederate commander until 9 o’clock the following morning to decide. After that, he said, the armistice was over.
Before dawn, the Confederate commander’s reply came back: He was willing to surrender Vicksburg on Grant’s terms.
At 10:00 a.m. on Independence Day, the Confederate commander ordered the Stars and Stripes raised over the Vicksburg battlements.
The Confederate surrender on July 4, 1863 is sometimes considered – when combined with Gen. Robert E. Lee’s defeat at Gettysburg the day before – the turning point of the war.
It cut off the states of Arkansas, Louisiana, and Texas from the rest of the Confederate States, effectively splitting the Confederacy in two for the duration of the war.
The Union victory also permanently severed communication between the Trans-Mississippi Department and the balance of the Confederacy.
This song is one of the most heartbreaking examples of the horror that the Civil War unleashed. 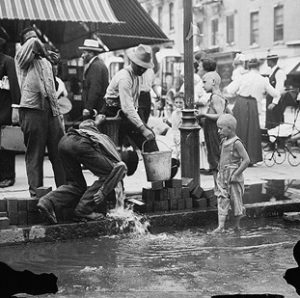 1911 – A heat wave – in the middle of a scorching 11-day run – torched the Northeast.
Across New England, record temperatures were shattered. In Portland, Maine, the mercury peaked at 103; in Boston, MA it was 104; in Meriden, CT, it was 104, in Vernon, VT, 105; in Nashua, NH, 106.
The temperatures were unheard of, but that was not all. What made them really lethal was the stillness of the air. Either the wind had itself been prostrated by the heat, or it had flown elsewhere in search of cooler weather. Flown south, perhaps, to Jacksonville, FL, where it was eight degrees cooler than Boston.
The brutal heat wave lasted until July 13. By then, an estimated 2,000 people had died, 1,100 of them in Massachusetts. 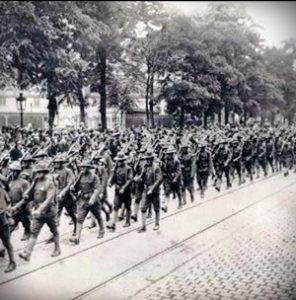 1917 – U.S. troops make their first public display of World War I, marching through the streets of Paris to the grave of the Marquis de Lafayette, a French aristocrat and hero of the American Revolutionary War.
Lafayette had commanded revolutionary troops against the British Empire and by his own request, had been buried in soil brought from America.
To the cheers of Parisian onlookers in front of the tomb, American officer Colonel Charles Stanton famously declared, “Lafayette, we are here!” 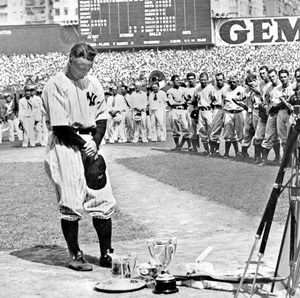 1939 – Lou Gehrig delivered what has been called “baseball’s Gettysburg Address” to a sold-out crowd at Yankee Stadium.
Having been diagnosed with Amyotrophic lateral sclerosis, the great New York Yankee slugger announced his retirement from baseball.
The New York Times account the following day called it “one of the most touching scenes ever witnessed on a ball field”, that made even hard-boiled reporters “swallow hard.”
The Yankees retired Gehrig’s uniform number “4”, making him the first player in Major League Baseball history to be accorded that honor.
Two years later, Lou Gehrig was dead. 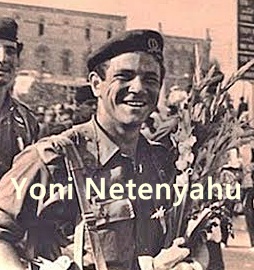 1976 – Israeli commandos raided Entebbe Airport in Uganda, rescuing almost all of the passengers and crew of an Air France jetliner seized by pro-Palestinian hijackers on June 27.
The operation, which took a week of planning, lasted 90 minutes. Of the 106 hostages, 102 were rescued. Five Israeli commandos were wounded and one – unit commander Lt. Col. Yonatan “Yoni” Netanyahu – was killed. Netanyahu was the older brother of Benjamin Netanyahu, who would later become Prime Minister of Israel
All of the hijackers and forty-five Ugandan soldiers were killed, and eleven Soviet-built MiG-17s and MiG-21s of Uganda’s air force were destroyed. 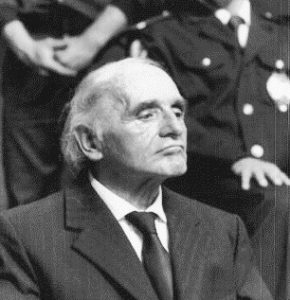 1987 – Nine jurors and three judges found Klaus Barbie – known as the Butcher of Lyon – guilty of the 341 separate charges that were brought against him at the court in Lyon, France after being extradited from Bolivia.
The 73-year-old was accused of deporting 842 people – mainly Jews – to concentration camps in Germany during the Second World War. Historical research indicates Barbie was directly responsible for the deaths of up to 14,000 people.
He was sentenced to life imprisonment. He died in prison in Lyon four years later of leukemia and cancer of the spine and prostate at the age of 77. 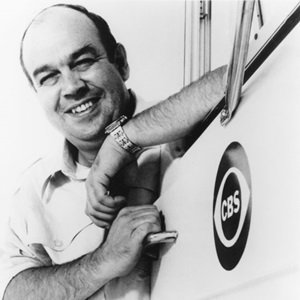 1997 – Charles Kuralt, most widely known for his long career with CBS, first for his “On The Road” segments on The CBS Evening News with Walter Cronkite, and later as the first anchor of CBS News Sunday Morning, died of complications of Lupus at the age of 62. 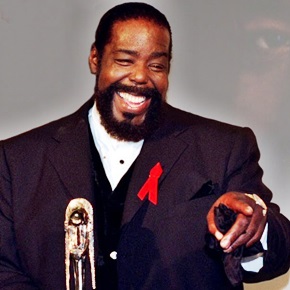 2003 – Barry White, a towering figure in the world of soul music, died after suffering a stroke while undergoing dialysis and awaiting a kidney transplant. He was 58.
White, with worldwide record sales in excess of 100 million, is best remembered for his two biggest hits, You’re The First, The Last, My Everything and Can’t Get Enough Of Your Love, Babe.
In an obituary affectionately referring to White by his familiar nickname, ‘The Walrus of Love,’ the BBC recalled “the rich timbres of one of the most distinctive soul voices of his generation, about which it was once said, ‘If chocolate fudge cake could sing, it would sound like Barry White.'” 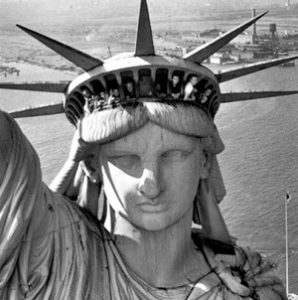 2009 – The Statue of Liberty’s crown reopened to the public after eight years of closure due to security concerns following the September 11, 2001 attacks.