“Live your truth. Express your love. Share your enthusiasm. Take action towards your dreams. Walk your talk. Dance and sing to your music. Embrace your blessings. Make today worth remembering.”
~ Steve Maraboli

Today marks the end of a look back at the soundtrack of my teenage life … because it was the end of my teenage years. It was, as the final song indicated, also the end of the age of innocence.
When the year started I was living in Los Angeles, watching barefoot girls dancing in the moonlight. By the time the year ended, I was in San Antonio as an Air Force recruit, thinking about war because it was just a shot away.
In between, I heard a lot of great music, including a few songs you may have never heard (but that was your fault, not mine.) 🙂
From mumbled promises, mongrel pianos, salty dogs, burnin’ heartaches, and a Bally table king to discovering the wonder of Stevie, ruby throated sparrows, smiling on your brother, and a lot more, this is the music that was in my head.

Soundtrack To My Life 1969 Medley 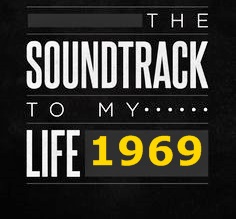