“Music melts all the separate parts of our bodies together. Every rusty fragment, every scattered piece could be melted into one rhythm. A note was a whole, and it was in motion, ascending or descending, swelling in fullness or thrown away, thrown out into the air, but always moving.”
~Anaïs Nin

Today I’m focused on 1968, the penultimate look back at the soundtrack of MY teenage life. It was an extraordinary year in music … Actually it was an extraordinary year in a lot of ways.
It was a year we lamented lost leaders while revolution was in the air. We discussed sympathy for the devil while wondering who really was to blame. The promise ignited by 1967’s summer of love had fallen asleep while guitars gently wept and waiting hopes cast silent spells.
It was the year of Big Pink, matchstick men, heavy metal thunder, lost continents, chest fevers, crossfire hurricanes, lonely docks, and trains of freedom.
We all looked at bent-backed tulips while walking on love streets, and we heard the crying of humanity as sky pilots fell and palace revolutions raged all along the watchtowers.
It was a year in music like no other, so while these medleys are long, there was no way I could leave any of it out. 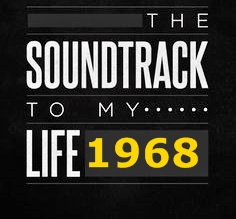