“It is untrue that I or anyone else in Germany wanted the war in 1939. It was desired and instigated exclusively by those international statesmen who were either of Jewish descent or worked for Jewish interests … I have further never wished that after the first fatal world war, a second against England, or even against America, should break out.”
~Adolf Hitler
Political Testament April 29, 1945 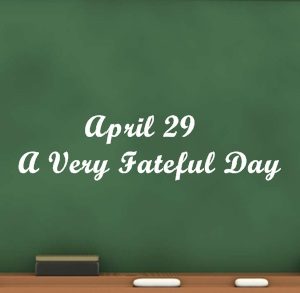 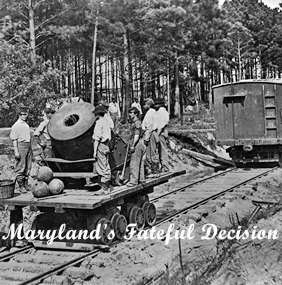 1861 – Two days after President Abraham Lincoln had suspended the right of habeas corpus in Maryland, the state’s legislature voted (53–13) to stay in the Union.
In defiance of Lincoln, the legislature rejected hostilities with its southern neighbors, voting to close Maryland’s rail lines to prevent them from being used for war by the Union.
A different side of Lincoln then emerged.
Baltimore’s mayor, police chief, entire Board of Police, and city council were arrested without charge and imprisoned indefinitely without trial.
Lincoln’s decision to suspend was overturned by Roger B. Taney, the Chief Justice of the U.S. Supreme Court, who ruled the suspension unconstitutional, stating that only Congress could suspend habeas corpus.
Lincoln and Attorney General Edward Bates ignored the Chief Justice’s order, and when Lincoln’s dismissal of the ruling was criticized in an editorial by prominent Baltimore newspaper editor Frank Key Howard, the editor was arrested by federal troops without charge or trial.
The troops imprisoned Howard (Francis Scott Key’s grandson) in Fort McHenry, which, as he noted, was the same fort where the Star Spangled Banner had been waving “o’er the land of the free” in his grandfather’s song.
In 1863, Howard wrote about his experience as a “political prisoner” at Fort McHenry in the book Fourteen Months in the American Bastille …
And yes, two of the publishers selling the book were then arrested. 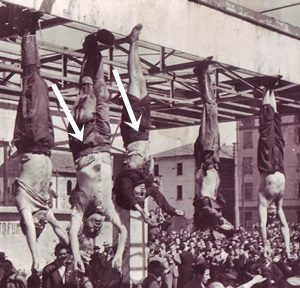 1945 – One day after the murder of Benito Mussolini, a yellow furniture van stopped at the Piazzale Loreto, a vast, open traffic roundabout where five roads intersected in the northern Italian city of Milan.
Mussolini’s dead body was dumped from the van onto the wet cobblestones of the empty roundabout, followed by those of 16 other men and a lone female, Claretta Petacci, his mistress since 1933.
All 18 people, their dead bodies thrown out by 10 men, had been murdered by Communist Party execution squads in hails of gunfire.
The former dictator’s death wasn’t enough to satisfy the mob. They strung the bodies of Mussolini, Petacci and other fascists by their feet from the girders of a gasoline station in a corner of the square … and systematically and mercilessly beat them into unrecognizable, grotesque figures.
WARNING! Some of the scenes in this video are disturbing. Viewer discretion is advised. 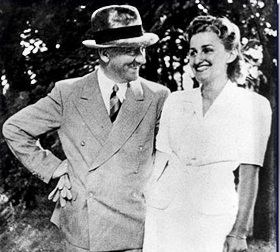 1945 – Adolf Hitler married his longtime partner Eva Braun in his Berlin bunker.
He also dictated his last will and testament. In it, he declared Heinrich Himmler and Hermann Goering to be traitors, and set out his plan for a new government, designating Admiral Karl Dönitz as his successor.
News of Benito Mussolini’s public, humiliating death reached Hitler by radio that afternoon. The report increased his determination to avoid capture.
“I do not wish to fall into the hands of an enemy who requires a new spectacle organized by the Jews for the amusement of their hysterical masses.”
The story continues tomorrow. 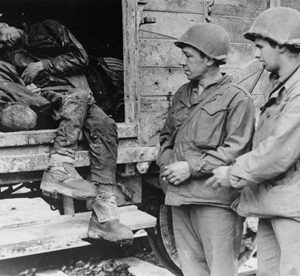 1945 – The U.S. Seventh Army’s 45th Infantry Division liberated Dachau, the first concentration camp established by Germany’s Nazi regime.
A major Dachau subcamp was liberated the same day by the 42nd Rainbow Division.
Established five weeks after Adolf Hitler took power as German chancellor in 1933, the camp served as the training center for SS concentration camp guards and was a model for other Nazi camps.
Nazi scientists tested the effects of freezing and changes to atmospheric pressure on inmates, infected them with malaria and tuberculosis and treated them with experimental drugs, and forced them to test methods of making seawater potable and of halting excessive bleeding.
Americans found more than 30 railroad cars filled with bodies in various states of decomposition. Inside the camp there were more bodies and 30,000 survivors.
Some of the American troops who liberated Dachau were so appalled by conditions at the camp that they machine-gunned at least two groups of captured German guards.
It is officially reported that over 100 SS guards were killed in this fashion, although unconfirmed accounts listed the number as closer to 500.
The German citizens of the town of Dachau were later forced to bury the 9,000 dead inmates found at the camp.
WARNING! Some of the scenes in this video are very disturbing. Viewer discretion is advised. 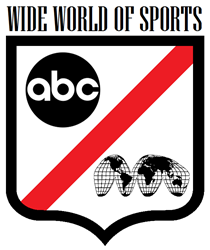 1961 – ABC’s Wide World of Sports premiered.
Hosted by Jim McKay – with a succession of co-hosts beginning in 1987 – the program ran until January 3, 1998, and “the thrill of victory and the agony of defeat” – its weekly introduction – became national catchphrases. 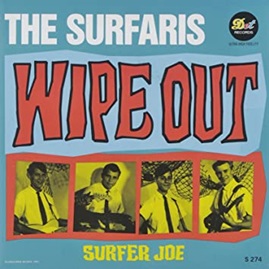 1963 – It had first been issued on the tiny DFS in January 1963, and a month later on the Princess label, but on this date, the Surfaris’ Wipe Out was finally picked up for national distribution on Dot Records.
The single spent four months on the Billboard Hot 100 chart in the autumn of 1963, reaching #2. It returned to the Hot 100 in 1966, reaching #16. 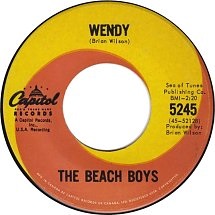 1964 – The Beach Boys recorded Wendy at United Western Recorders in Hollywood.
Released as a single off their All Summer Long album, the song peaked at #44 on the Billboard Hot 100. 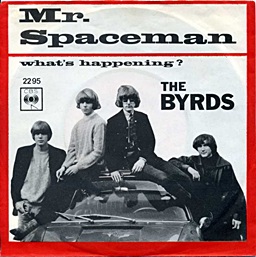 1966 – The Byrds recorded Mr. Spaceman at Columbia Studios in Hollywood.
Released as a single off the Fifth Dimension album, the song peaked at #36 on the Billboard Hot 100.
Space Rock Factoid: Mr. Spaceman was broadcast as a wake-up call to the astronauts aboard the NASA mission STS-41-D (the first mission of Space Shuttle Discovery) on September 2, 1984. 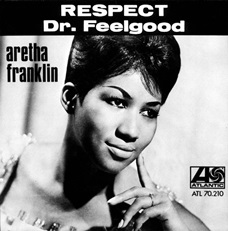 1967 – Aretha Franklin released Respect.
The song, written and originally released by Otis Redding in 1965, became Franklin’s signature song and is considered one of the best songs of the R&B era.
In 2002, the Library of Congress honored Franklin’s version by adding it to the National Recording Registry, and in 2004, it was placed number five on Rolling Stone magazine’s list of “The 500 Greatest Songs of All Time”. 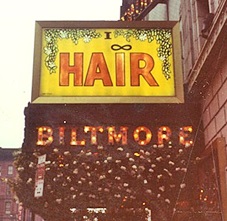 1968 – The controversial musical Hair opened at the Biltmore Theatre on Broadway, with some of its songs becoming anthems of the anti-Vietnam War movement.
The musical’s profanity, its depiction of the use of illegal drugs, its treatment of sexuality, its irreverence for the American flag, and its nude scene caused considerable controversy although critic reviews were, with few exceptions, overwhelmingly positive. 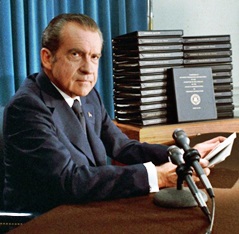 1974 – President Richard Nixon announced the release of edited transcripts of 46 White House tape recordings related to the Watergate scandal.
While the release satisfied the public – for the moment – several former supporters among the political community called for Nixon’s resignation or impeachment.
Senate Republican Leader Hugh Scott said the transcripts revealed a “deplorable, disgusting, shabby, and immoral” performance on the part of the President.
House Republican Leader John Jacob Rhodes agreed with Scott and recommended that if Nixon’s position continued to deteriorate, he “ought to consider resigning as a possible option.” 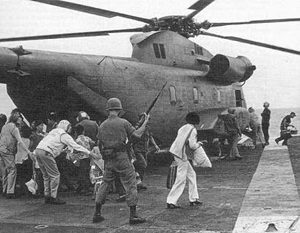 1975 – Operation Frequent Wind, the largest helicopter evacuation on record, began removing the last Americans from Saigon.
With the North Vietnamese attacking the outskirts of Saigon, U.S. Ambassador Graham Martin ordered the commencement of Frequent Wind.
In 19 hours, 81 helicopters carried more than 1,000 Americans and almost 6,000 Vietnamese to aircraft carriers offshore.
Cpl. Charles McMahon, Jr. and Lance Cpl. Darwin Judge, USMC, were the last U.S. military personnel killed in action in Vietnam, when shrapnel from a North Vietnamese rocket struck them as they were guarding Tan Son Nhut Airbase during the evacuation.
The story continues tomorrow. 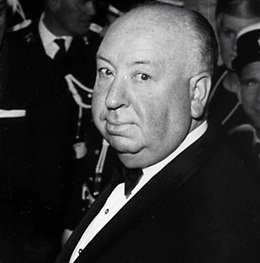 1980 – Director/producer Sir Alfred Hitchcock died of renal failure at the age of 80.
In a career spanning six decades, Hitchcock was nominated for the Academy Award for Best Director five times (Psycho, Spellbound, Lifeboat, Rear Window, and Rebecca) but never won, although Rebecca did win the Oscar for Best Picture.
A few of the other films Hitchcock is best known for are The Birds, North By Northwest, Rope, Vertigo and Dial M For Murder. 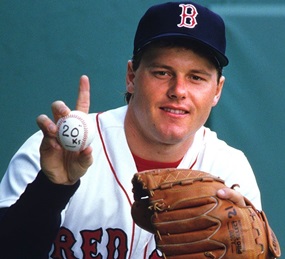 1986 – Boston’s Roger Clemens became the first pitcher in Major League history to strike out 20 batters in a nine-inning game, against the Seattle Mariners at Fenway Park.
He duplicated the effort on September 18, 1996 against the Detroit Tigers at Tiger Stadium. 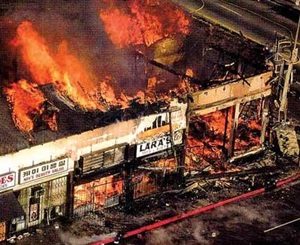 1992 – A jury of 10 whites, one Hispanic, and one Filipina in the Los Angeles suburb of Simi Valley acquitted four police officers who had been charged with using excessive force in arresting black motorist Rodney King a year earlier.
The announcement of the verdict, which enraged the black community, prompted widespread rioting throughout much of the sprawling city. Over the next three days, 63 people were killed and hundreds of buildings were destroyed.
One truck driver, Reginald Denny, became the face of the riots. He was nearly beaten to death. His skull was fractured in 91 places and pushed into his brain. His left eye was so badly dislocated that it would have fallen into his sinus cavity had the surgeons not replaced the crushed bone with a piece of plastic. 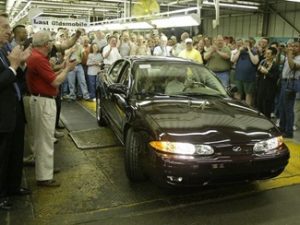 2004 – The last Oldsmobile – an Alero GLS 4-door sedan – came off the assembly line at the Lansing Car Assembly plant in Michigan, signaling the end of the 106-year-old automotive brand, America’s oldest. 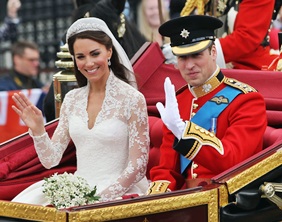 2011 – The wedding of Prince William and Catherine “Kate” Middleton took place at Westminster Abbey in London.
The occasion was a public holiday in the United Kingdom. One million people lined the route between Westminster Abbey and Buckingham Palace.
The ceremony was viewed live by tens of millions more around the world, including 72 million live streams on YouTube.
In the United Kingdom, television audiences peaked at 26.3 million viewers. 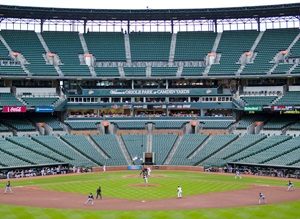 2015 – A baseball game between the Baltimore Orioles and the Chicago White Sox set the all-time low attendance mark for Major League Baseball.
Zero fans were in attendance for the game, as Camden Yards was officially closed to the public due to Baltimore protests surrounding the arrest and death of Freddie Gray, a 25-year-old African American who had sustained injuries to his neck and spine while in transport in a police vehicle.