“When will wounded justice, lying prostrate on the streets of Selma and Birmingham and communities all over the South, be lifted from this dust of shame to reign supreme among the children of men?””
~Dr. Martin Luther King, Jr.
March 25, 1965 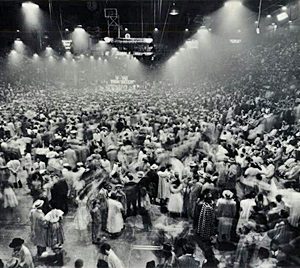 1952 – The Moondog Coronation Ball, organized by Alan Freed of WJW-AM and generally accepted as the first major rock & roll concert, was held at Cleveland Arena.
Rock Factoid: Long before he was affected by the payola scandal which would ruin him by the early sixties, “Moondog” Freed had developed a strong following in Cleveland. A man devoid of racial prejudice in a time that was rank with it, he refused to play white “covers” of songs by black artists.
As a reward for their loyalty to him, Freed promised to throw “Moondoggers” a huge party. As it turned out, the party was too big. With an estimated 20,000 individuals trying to crowd into an arena that held slightly more than half that, police and fire marshals were on the alert for trouble.
Rock Factoid #2: Even after the hall was full to capacity, thousands were still pushing to get in. Doors crashed open, glass exploded, fistfights were breaking out. Fearing a full-scale riot was just minutes away, authorities shut down the concert after the first song by opening act Paul ‘Hucklebuck’ Williams.
That’s right, rock & roll’s first major concert – still considered by many as the “birthday of rock and roll” – ended after one song. It was both a raging success and a total failure. 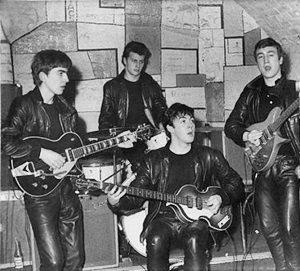 1961 – The Beatles made their first evening appearance at the Cavern Club on 10 Mathew Street in Liverpool.
Their previous appearance at the venue had been a lunchtime show on February 21. In total, the group made 292 appearances at the club, with their final performance coming on August 3, 1963. 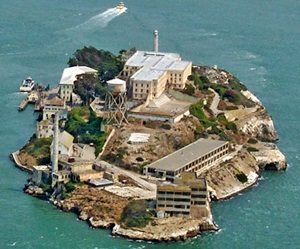 1963 – Alcatraz Federal Penitentiary in San Francisco Bay was closed.
The prison – originally the site of a fort in the 1850s and later a United States Army military prison – opened in 1934 and eventually housed 1,576 federal inmates, including some of America’s most ruthless.
Names such as Al Capone, Robert Stroud – the “Birdman of Alcatraz”, George “Machine Gun” Kelly, Rafael Cancel Miranda, Mickey Cohen, Arthur R. “Doc” Barker, Whitey Bulger, and Alvin “Creepy” Karpis (who served more time at Alcatraz – 26 years – than any other inmate) were all “guests” on The Rock.
The maximum security facility was over three times more expensive to run than the average American prison and the situation was made worse by structural deterioration from exposure to salt spray. 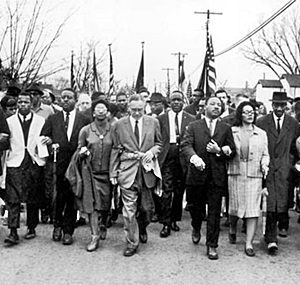 1965 – Over 3,500 civil rights demonstrators, led by the Rev. Martin Luther King Jr., began their historic march from Selma to Montgomery, Alabama.
The protestors assembled at Brown Chapel A.M.E. Church to commence the 54-mile trek to Montgomery. Most of the participants were black, but spiritual leaders of multiple races, religions, and creeds marched abreast with Dr. King, as seen in the famous photo shown above.
At the end of the first day, most of the marchers returned to Selma by bus and car, leaving 300 to camp overnight and take up the journey the next day.
On March 22 and 23, the protesters marched across Lowndes County. At the time of the march, the population of the county was 81% black and 19% white, but not a single black was registered to vote.
There were 2,240 whites registered to vote in Lowndes County, a figure that represented 118% of the adult white population (in many Southern counties of that era, it was common practice to retain white voters on the rolls after they died or moved away).
On the morning of March 24, the march crossed into Montgomery County. Additional marchers were ferried by bus and car to join the line. By evening, several thousand marchers had reached the final campsite at the City of St. Jude, a complex on the outskirts of Montgomery.
That night on a makeshift stage, a “Stars for Freedom” rally was held, with singers Harry Belafonte, Tony Bennett, Frankie Laine, Peter, Paul and Mary, Sammy Davis, Jr., Joan Baez, Nina Simone, and The Chad Mitchell Trio all performing.
On Thursday, March 25, 25,000 people marched from St. Jude to the steps of the State Capitol Building where King delivered his epic How Long, Not Long speech.
“The end we seek is a society at peace with itself, a society that can live with its conscience. … I know you are asking today, how long will it take? I come to say to you this afternoon however difficult the moment, however frustrating the hour, it will not be long.”
King and the marchers then approached the entrance to the capitol with a petition for Governor George Wallace. A line of state troopers blocked the door. Undeterred, the marchers remained at the entrance until one of Wallace’s secretaries appeared and took the petition. 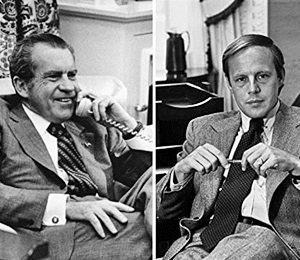 1973 – John Dean told President Richard Nixon, “We have a cancer within, close to the presidency, that’s growing.”
During a conversation in the Oval Office regarding the Watergate break-in and subsequent cover-up, Dean told Nixon the “cancer” on the presidency would take them all down they didn’t stop it.
Before Dean later testified before Congress in the Watergate hearings, Nixon called Dean into his office in the Executive Office Building to try and make sure that Dean didn’t implicate him in his testimony. However, his bizarre behavior helped precipitate his downfall.
Nixon stood up from his chair, walked over to a corner of the office and whispered, “I was wrong to promise clemency for [burglar E. Howard] Hunt when I spoke with Chuck Colson, wasn’t I?”
Dean replied, “Yes, Mr. President, that would be considered an obstruction of justice.”
Dean thought it was very strange that Nixon had moved to a different of the room and whispered that question, and he wondered if Nixon had done so because he was secretly taping the conversation and didn’t want that part to be audible.
When he testified in June that Nixon had knowingly obstructed justice through the Watergate cover-up, he mentioned this suspicion.
“I don’t know if a tape exists,” Dean said, “but if it does exist…I think this Committee should have that tape because it would corroborate many of the things this Committee has asked me.”
It was just a hunch, but it led to a bombshell discovery. A few weeks later, Senate investigators asked presidential aide Alexander Butterfield if he knew about any such tapes. Not only was Butterfield one of only a few people who knew about the taping system, he was actually the person who helped the Secret Service to install it at Nixon’s request.
“I’m sorry you asked,” Butterfield responded, “but, yes, there was a taping system that taped all presidential conversations.’
The tapes were what brought the whole thing down. Nixon had microphones in the Oval Office, the Cabinet Room, his Executive Office Building office and the Aspen Lodge at Camp David, and also recorded phone calls in the Lincoln Sitting Room.
After the Supreme Court ordered Nixon to hand over the tapes to Congress in the summer of 1974, prosecutors found they corroborated Dean’s testimony and implicated the president in the cover-up. 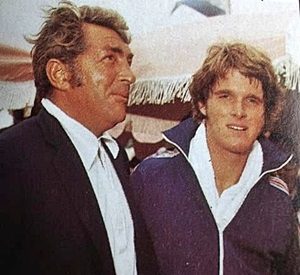 1987 – Dean Martin, Jr. died in a plane crash at the age of 35.
The eldest son of entertainer Dean Martin, he joined Desi Arnaz Jr. and Billy Hinsche in the pop group Dino, Desi, & Billy, which had a few minor hits in the U.S. in 1965, landing in the Billboard Top 30 twice; I’m A Fool (#17) and Not The Lovin’ Kind (#25).
He became a successful tennis player, competing in a junior competition at Wimbledon, before turning to acting. He co-starred with Ali MacGraw in the film Players, and later starred in the TV series Misfits of Science.
Martin, an avid pilot, obtained his pilot’s license at age 16 and became an officer in the California Air National Guard in 1980. Martin died when his F-4 departed March Air Force Base in California on a routine training mission and crashed in California’s San Bernardino Mountains during a snowstorm, killing him and his weapons systems officer, Captain Ramon Ortiz. 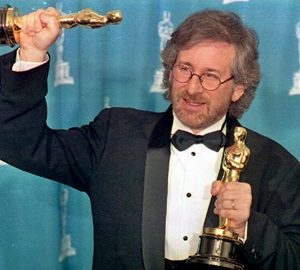 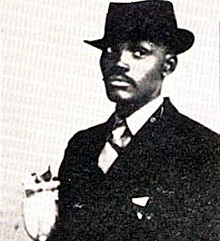 2006 – Three South African women won a legal battle over a song their father wrote.
Solomon Linda wrote The Lion Sleeps Tonight in 1939 (titled Mbube when he wrote it),but never received any royalties despite the fact that the song was a big hit for the Weavers, the Tokens, and was a significant part of The Lion King soundtrack.
How did this happen?
In the late 1940s, the South African record company that owned the rights to the song shipped copies to Decca Records to see if they might be interested in releasing it. They weren’t, but Alan Lomax, who together with his father were the premier collectors of traditional music in the world, worked at Decca and he thought his friend Pete Seeger of the Weavers might have an interest.
The Weavers certainly knew that Linda wrote the song (since the album they received from Lomax listed his name). At any rate, when the Weavers recording came out, it credited the song to Paul Campbell, a pseudonym used whenever the group recorded a song whose copyright was in question.
This didn’t sit well with Seeger, who openly acknowledged Solomon as the true author of Wimoweh and felt he should get the money.
Anti-apartheid activists put Seeger in touch with a Johannesburg lawyer, who located the songwriter. Seeger sent him a $1,000 check and instructed his publisher to do the same with all future payments.
They never did.
In 1961, the Tokens decided to cover the Weavers’ version of the song, but with a twist. They added English lyrics by George David Weiss, and together with producers Hugo Peretti and Luigi Creatore, shared songwriting credit on The Lion Sleeps Tonight.
None of the royalties went to Solomon Linda.
And then the Disney folks working on The Lion King decided that a warthog and meerkat should walk off into the sunset singing the song in that film.
When it became a smash sensation, it again added to the record of shame against Solomon Linda. Disney never paid his family a red cent even though music industry attorneys claim Disney earned $10-20 million in soundtrack revenue.
On this date in 2006, Solomon Linda’s daughters finally won a six-year court battle that gave them 25 per cent of all past and future royalties from the song; a figure estimated to be $15 million..
Ripped Off and Abused Factoid: Linda, who was a cleaner at a Johannesburg record company when he wrote the song, died in 1962 with $22 in his bank account.