“History ought never to be confused with nostalgia. It’s written not to revere the dead, but to inspire the living. It is part of our cultural bloodstream, the secret of who we are.”
~Simon Schama 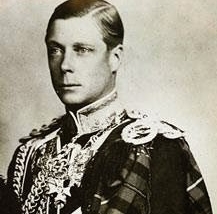 1936 – Following the death of King George V, his son, Edward VIII became King of the United Kingdom.
Only months into his reign, he caused a constitutional crisis by proposing marriage to American socialite Wallis Simpson, who had divorced her first husband and was seeking a divorce from her second.
The prime ministers of the United Kingdom and the Dominions opposed the marriage, arguing that the people would never accept a divorced woman with two living ex-husbands as queen consort.
Choosing not to end his relationship with Simpson, Edward abdicated on Dec. 11, 1936. With a reign of 326 days, Edward was one of the shortest-reigning monarchs in British history. 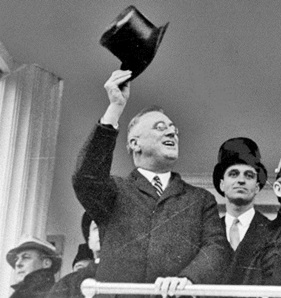 1937 – Franklin D. Roosevelt was inaugurated for his second term as President. It was the first time the date of January 20th was used. Prior to that, the date had been March 4, the day of the year on which the Constitution of the United States first took effect in 1789. 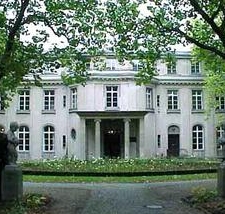 1942 – At a conference held in the Berlin suburb of Wannsee, Nazi officials arrived at a “final solution” that called for exterminating Europe’s Jews,.
Hermann Goering, writing under instructions from Adolf Hitler, had ordered Reinhard Heydrich, SS general and Heinrich Himmler’s deputy, to submit “as soon as possible a general plan of the administrative, material, and financial measures necessary for carrying out the desired final solution of the Jewish question.”
Heydrich met with Adolf Eichmann, chief of the Central Office of Jewish Emigration, and 15 other officials from various Nazi ministries and organizations at Wannsee.
The agenda was simple and focused: to devise a plan that would render a “final solution to the Jewish question” in Europe. Various gruesome proposals were discussed, including mass sterilization and deportation to the island of Madagascar. Heydrich proposed simply transporting Jews from every corner Europe to concentration camps in Poland and working them to death.
Although the word “extermination” was never uttered during the meeting, the implication was clear. “In large, single-sex labor columns, Jews fit to work will work their way eastwards constructing roads. Doubtless the large majority will be eliminated by natural causes. Any final remnant that survives will doubtless consist of the most resistant elements. They will have to be dealt with appropriately, because otherwise, by natural selection, they would form the germ cell of a new Jewish revival.”
One copy of the Wannsee Protocol, the minutes of the meeting which had been personally edited by Heydrich, survived the war to be found by Robert Kempner, lead U.S. prosecutor before the Nuremberg trials, in files that had been seized from the German Foreign Office. Those minutes later provided key evidence during the Nuremberg war crimes trials. 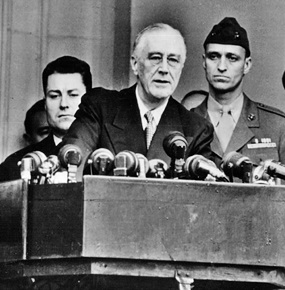 1945 – A frail Franklin D. Roosevelt was inaugurated to his fourth term as President of the United States. Three months after his inauguration, he died.
Roosevelt’s unparalleled 13 years as president led to the 1947 passing of the 22nd Amendment to the U.S. Constitution, limiting future presidents to a maximum of two elected terms in office, or one elected term if the president already served more than two years of another president’s elected term. 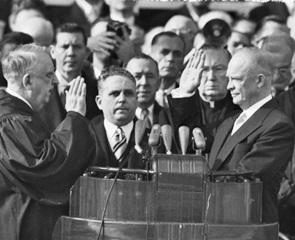 1953 – Dwight Eisenhower was inaugurated as the 34th President of the U.S. His inaugural address was the first to be carried live, coast-to-coast. 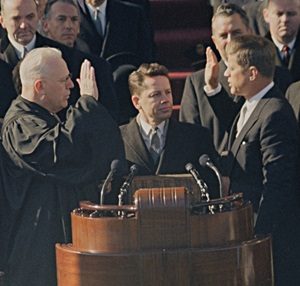 1961 – John F. Kennedy was inaugurated as the 35th President of the United States.
Kennedy, the country’s first Catholic president, declared that “the torch has been passed to a new generation of Americans” and appealed to Americans to “ask not what your country can do for you, ask what you can do for your country.” 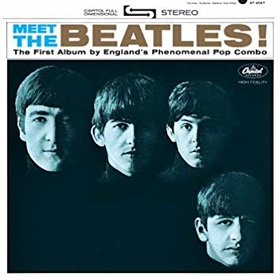 1964 – Meet The Beatles was released by Capitol Records.
Within three weeks, it was the #1 album on the Billboard album chart and it remained there for eleven weeks.
By the end of 1964, the album had sold over 4 million copies in the U.S. 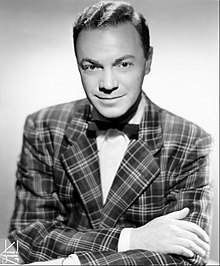 1965 – Alan Freed (legendary radio DJ who coined the term “rock & roll”) died of uremia and cirrhosis of the liver. He was only 43. 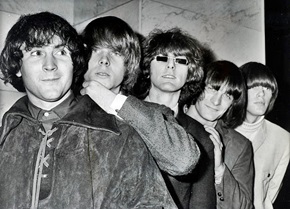 1965 – The Byrds recorded Mr. Tambourine Man at Columbia Studios in Hollywood.
Despite what the video shows, the only member of the band who actually played an instrument on the song was lead guitarist Jim (later Roger) McGuinn He also handled the lead vocal with band members Gene Clark and David Crosby singing harmony.
The rest of the music was supplied by members of the legendary professional session men known as The Wrecking Crew – Hal Blaine (drums), Leon Russell (electric piano), Larry Knetchel (bass guitar), and Jerry Cole (rhythm guitar). 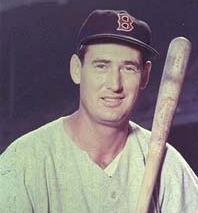 1966 – Ted Williams was the sole eligible candidate elected to the Baseball Hall of Fame by the Baseball Writers’ Association of America.
Williams, one of the greatest hitters in baseball history (and the last player to hit over .400 in a season when he hit .406 in 1941), was a two-time American League Most Valuable Player, six-time batting champion, 17-time All-Star and a two-time Triple Crown winner.
He did all of that despite missing most of five seasons due to military service.
He finished his career with a .344 batting average, 521 home runs, and a .482 on-base percentage, the highest of all time.
Incredibly (or maybe not, considering the strange ways of the BBWAA), 20 writers left Williams off their ballot. 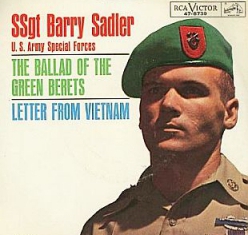 1966 – Staff Sgt. Barry Sadler released The Ballad Of The Green Berets.
It was one of the very few songs of the 1960s to cast the military in a positive light and became a major hit, reaching #1 for five weeks on the Billboard Hot 100. It was also a crossover smash, reaching #1 on Billboard’s Easy Listening chart and #2 on Billboard’s Country survey. 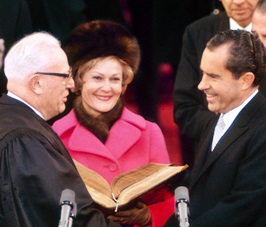 1969 – Eight years after losing a bid for the presidency to John F. Kennedy – and six years after losing a race for California governor, which seemed to indicate his political career was over – Richard M. Nixon was inaugurated as the 37th President of the United States. 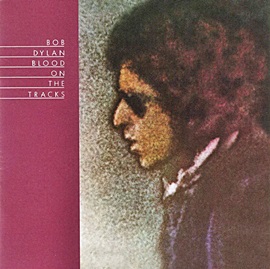 1977 – Bob Dylan released the classic Blood On The Tracks album.
In 2003, the album – which reached #1 in the U.S. and Canada and #4 in the U.K. – was ranked #16 on Rolling Stone magazine’s list of the 500 greatest albums of all time.
Dylan – who recorded the album during a time of upheaval in his personal life, including estrangement from his then-wife Sara – was later to say, “A lot of people tell me they enjoy that album. It’s hard for me to relate to that. I mean, people enjoying that type of pain, you know?” 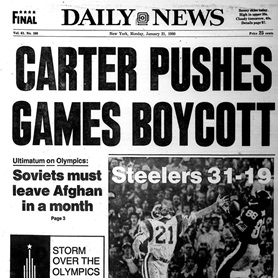 1980 – In a letter to the United States Olympic Committee, President Jimmy Carter proposed that the 1980 Summer Olympics be moved from the planned host city, Moscow, if the Soviet Union failed to withdraw its troops from Afghanistan within a month.
Lord Killanin, president of the International Olympic Committee, reacted quickly to Carter’s statement, saying it was impossible to move the games from Moscow.
After the IOC denied Carter’s request, the USOC voted to boycott the Moscow games, a decision that Carter announced on March 21, 1980. The boycott devastated the hopes of many U.S. athletes, especially after Carter promised to revoke the passports of American athletes who traveled to the games in violation of the boycott.
For his part, Killanin called the U.S. boycott a violation of the Olympic charter, pointing out that Moscow had been awarded the games in the mid-1970s as part of a binding contract. 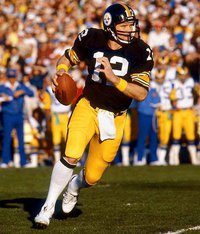 1980 – The Pittsburgh Steelers defeated the Los Angeles Rams, 31-19, at Super Bowl XIV.
The Rams led 13-10 at the half and 19-17 at the end of the third quarter, but a 73-yard pass from Steelers quarterback Terry Bradshaw to John Stallworth and a Franco Harris 1-yard run put Pittsburgh on top. 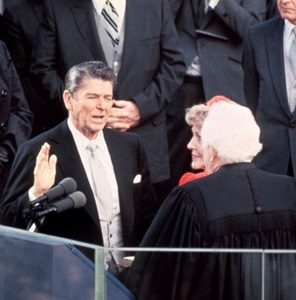 1981 – Ronald Reagan was sworn in as President of the United States.
52 Americans who had been held hostage by Iran for 444 days were released just minutes after the presidency had passed from Jimmy Carter to Reagan. 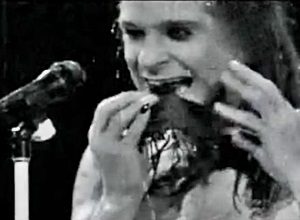 1982 – While performing at Veterans Memorial Auditorium in Des Moines, Iowa, Ozzy Osbourne bit the head off a bat. The singer said he thought the bat was made of rubber.
It wasn’t.
17-year-old Mark Neal, who threw it onto the stage, said it was brought to the show dead, but according to Osbourne, the bat was not only alive but managed to bite him, resulting in Osbourne being treated for rabies. 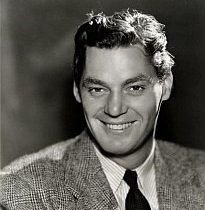 1984 – Actor Johnny Weissmuller died from pulmonary edema at the age of 79.
He was the winner of five Olympic gold medals for swimming but is best known for playing Tarzan in films of the 1930s and 1940s. 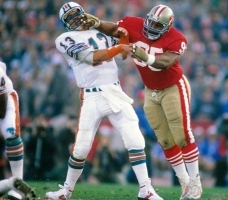 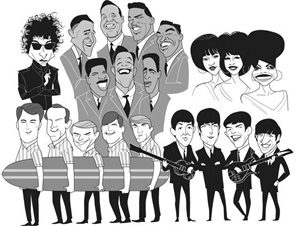 1988 – The Beatles, Bob Dylan, The Beach Boys, The Drifters, and The Supremes were inducted into the Rock & Roll Hall of Fame.
Considering who the inductees were, the event itself should have been memorable enough but it became infamous for a speech by Mike Love of The Beach Boys.
In a rambling, incoherent five minute statement, Love managed to insult The Beatles, Diana Ross, Mick Jagger, Bruce Springsteen and Billy Joel. 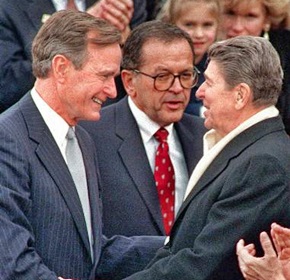 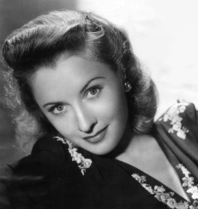 1990 – Actress Barbara Stanwyck died of congestive heart failure at the age of 82.
She was nominated four times for an Academy Award for Best Actress: Stella Dallas, Ball Of Fire, Double Indemnity,and Sorry, Wrong Number, and was well known for her role in television’s The Big Valley. 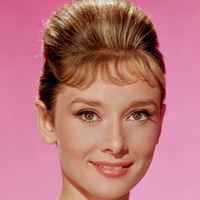 1993 – Actress Audrey Hepburn died of colon cancer at the age of 63.
She starred in Breakfast At Tiffany’s, Roman Holiday, My Fair Lady, A Nuns Story, Sabrina, Funny Face, and so many more. 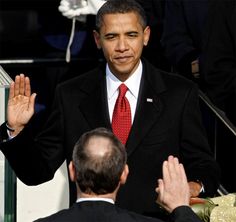 2009 – Barack Obama, former U.S. Senator from Illinois, was sworn in as the 44th – and first African-American – President of the United States. 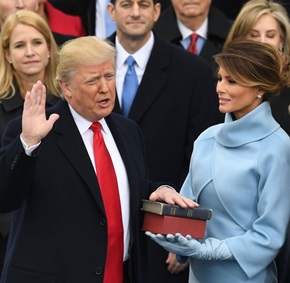 2017 – Donald Trump, a businessman and former television personality with no elective experience, was sworn in as the 45th President of the United States.
At the age of 70, he was the oldest first term president in U.S. history.