“A look at the past reminds us of how great is the distance, and how short, over which we have come. The past makes us ask what we have done with us. It makes us ask whether our very achievements are not ironical counterpoint and contrast to our fundamental failures.”
~Robert Penn Warren 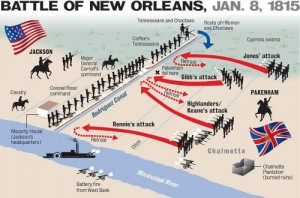 1815 – U.S. General Andrew Jackson achieved the greatest American victory of the War of 1812 at the Battle of New Orleans – two weeks after the war had officially ended with the signing of the Treaty of Ghent.
Although the peace agreement was signed on December 24, word did not reach the British forces attacking the Gulf coast in time to halt a major attack. The British marched against New Orleans, hoping that by capturing the city, they could separate Louisiana from the rest of the United States.
Pirate Jean Lafitte, however, had warned the Americans of the attack, and the arriving British found militiamen under General Jackson strongly entrenched at the Rodriquez Canal.
In two separate assaults, the 7,500 British soldiers under Sir Edward Pakenham were unable to penetrate the U.S. defenses, and Jackson’s 4,500 troops, many of them expert marksmen from Kentucky and Tennessee, decimated the British lines.
In half an hour, the British had retreated, General Pakenham was dead, and nearly 2,000 of his men were killed, wounded, or missing. U.S. forces suffered only eight killed and 13 wounded. 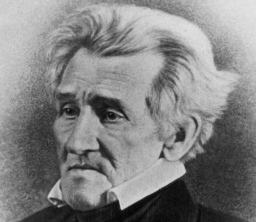 1835 – For the first – and last – time, the United States started the year with no national debt.
The debt was at $58 million when Andrew Jackson assumed office. In his 1834 State of the Union, Jackson announced that the country would not only be debt-free but have a surplus the next year.
He was right.
He blocked spending bills, slashed the budget, and even vetoed the national highway program because it was too expensive.
He got rid of all that debt by selling land owned by the U.S. government in the western part of the country. A real-estate boom made all land valuable, and Jackson took advantage. Sadly the economy crashed the next year and the government began accruing debt again.
On January 1, 1836 was $37,000. 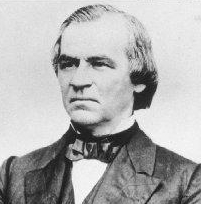 1867 – Congress overrode President Andrew Johnson’s veto of a bill granting all adult male citizens of the District of Columbia the right to vote, and the bill became law.
It was the first law in American history that granted African-American men the right to vote.
According to terms of the legislation, every male citizen of the city 21 years of age or older had the right to vote, except charity recipients, those under guardianship, men convicted of major crimes, or men who voluntarily sheltered Confederate troops or spies during the Civil War.
The bill, vetoed by President Johnson on January 5, was overridden by a vote of 29 to 10 in the Senate and by a vote of 112 to 38 in the House of Representatives. 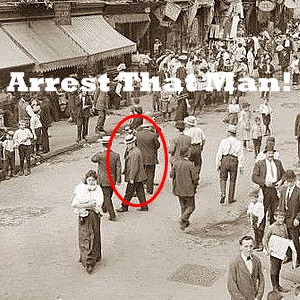 1902 – New York state assemblyman Francis G. Landon had a bill passed to criminalize men turning around on a street and “looking at a woman in that way.”
The law – which technically still exists – carried serious penalties.
Offenders could be fined $25 and those that went on to commit a second flirting offense would be ordered to wear a pair of horse blinders whenever they stepped out on the streets. 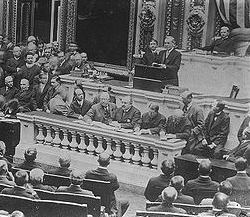 1918 – In an address before a joint meeting of Congress, President Woodrow Wilson discussed the aims of the United States in World War I and outlined his “14 Points” for achieving a lasting peace in Europe.
The peace proposal called for unselfish peace terms from the victorious Allies, the restoration of territories conquered during the war, the right to national self-determination, and the establishment of a postwar world body to resolve future conflict. The speech was translated and distributed to the soldiers and citizens of Germany and Austria-Hungary and contributed significantly to their agreeing to an armistice in November 1918. 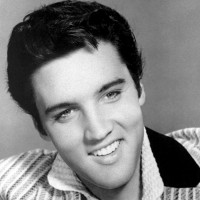 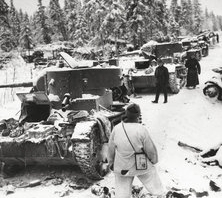 1940 – The one-month Battle of Suomussalmi came to a shocking conclusion when Finnish forces (11,000 men) drove Soviet troops (50,000 men) out of the village of Haukila, Finland.
While the Finns suffered 1,000 casualties, historians estimate the Soviet losses to be around 17,000 men.
Soviet commander Alexey Vinogradov and two of his chief officers retreated in the middle of crucial battles. As they reached the Soviet lines four days later, they were court-martialed, found guilty and sentenced to death. The executions were carried out immediately.
The Finns returned Soviet prisoners of war, but none of them managed to get back to the Ukraine as the Soviet secret service NKVD executed all of them in the summer of 1940. 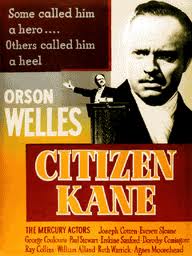 1941 – One of Hollywood’s most famous clashes of the titans – an upstart “boy genius” filmmaker versus a furious 76-year-old newspaper tycoon – heated up when William Randolph Hearst ordered all of his newspapers to reject advertisements for Orson Welles’ Citizen Kane.
The film was loosely based on the life of Hearst, a notoriously innovative, often tyrannical businessman who had built his own nationwide newspaper empire and owned eight homes, the most notable of which was Hearst Castle at San Simeon, California – the inspiration for the film’s “Xanadu”. 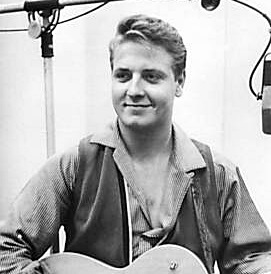 1960 – Eddie Cochran’s last recording session was held in Hollywood.
In February 1959, two of Cochran’s friends, Buddy Holly and Ritchie Valens, along with the Big Bopper, were killed in a plane crash while on tour.
Ironically, one of the songs Cochran recorded during that final session (Three Steps To Heaven) featured members of The Crickets, Buddy Holly’s former group.
Less than four months later, Cochran was also dead after being killed in a car accident. 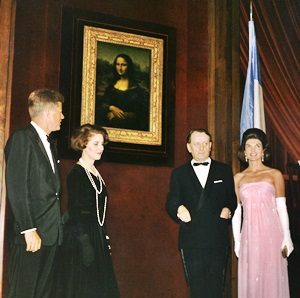 1962 – At the National Gallery of Art in Washington, D.C, Leonardo da Vinci’s masterpiece, the Mona Lisa, was exhibited for the first time in America.
Over 2,000 dignitaries, including President John F. Kennedy and First Lady Jackie Kennedy, came out that evening to view the famous painting. The next day, the exhibit opened to the public, and during the next three weeks an estimated 500,000 people came to see it.
The painting then traveled to New York City’s Metropolitan Museum of Art, where it was seen by another million people. 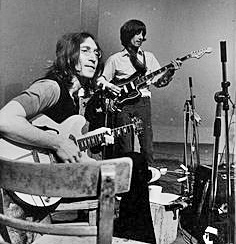 1969 – The first hint of trouble on the Get Back film set appeared when John Lennon began mocking George Harrison’s songwriting ability.
In particular, Lennon thought Harrison’s All Things Must Pass was “dreadful” and flatly rejected it as a potential Beatles song. 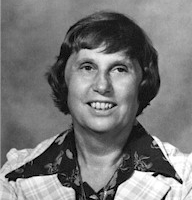 1973 – Ella T. Grasso was sworn in as Governor of Connecticut.
She was the first woman in American history to serve as a Governor in the United States “in her own right”, as all three female governors preceding Grasso had been married to men who were previously the governor of their states. 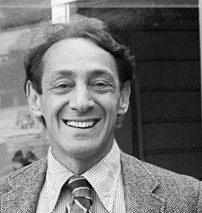 1978 – Harvey Bernard Milk became the first openly gay person to be elected to – and hold – public office in California when he was sworn in as a member of the San Francisco Board of Supervisors.
Milk served almost 11 months in office but on November 27, 1978, Milk and Mayor George Moscone were assassinated by Dan White, another city supervisor who had recently resigned but wanted his job back. 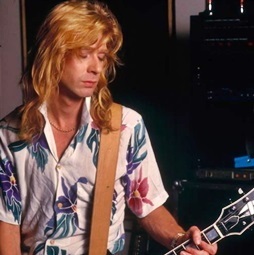 1991 – Steve Clark, lead guitarist with Def Leppard (Pour Some Sugar On Me) died from a combination of alcohol and drugs.
Clark’s autopsy revealed high levels of codeine, Valium and morphine, in addition to a blood alcohol level of .30, three times the British legal driving limit. 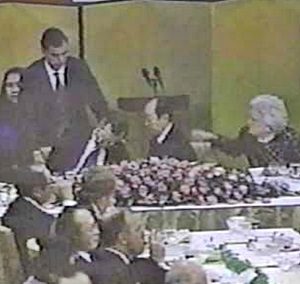 1992 – U.S. President George H.W. Bush fell suddenly ill at a state dinner in Japan.
The President became pale, slumped in his chair and promptly vomited on the Japanese Prime Minister. 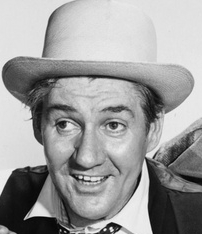 1994 – Actor Pat Buttram died of kidney failure at the age of 78.
He played Gene Autry’s sidekick on The Gene Autry Show and the character of Mr. Haney in the television series Green Acres. 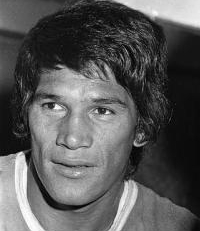 1995 – Carlos Monzon, former middleweight boxing champion and widely regarded as one of the greatest boxers of all time, died in a car accident while returning to prison following a furlough. He had been sentenced in 1988 to 11 years in prison for the murder of his wife. He was 52. 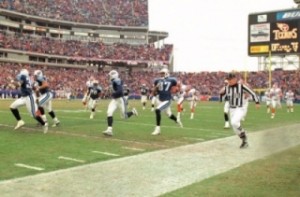 2000 – In an American Football Conference wild card match-up at Adelphia Coliseum in Nashville, the Tennessee Titans staged a last-second come-from-behind victory to beat the Buffalo Bills 22-16 on a kickoff return play later dubbed the “Music City Miracle”.
A Buffalo field goal with only 16 seconds left in the game had given the Bills a 16-15 lead. After a short, low kickoff, Lorenzo Neal caught the ball near the Tennessee 25-yard line. Running to his right, he handed off to tight end Frank Wycheck, who spun and threw a low lateral pass to receiver Kevin Dyson. Dyson headed down the left sideline, completely fooling the Bills defense and rushing 75 yards into the end zone.
After studying the play at the sideline replay booth for a seemingly interminable length of time, Referee Phil Luckett emerged to confirm that the call on the field would stand, and the touchdown was good.
The Music City Miracle gave the Titans their first playoff win since 1991 and capped one of the most exciting finishes in NFL playoff history. 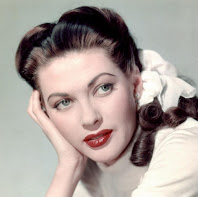 2007 – Actress Yvonne De Carlo died of natural causes at the age of 84.
She played the role of Sephora, the wife of Moses in The Ten Commandments but was best known for her role of Lily Munster in the television series The Munsters. 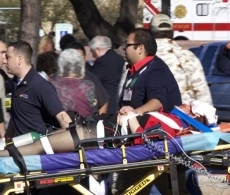 2011 – Gabrielle Giffords, a U.S. congresswoman from Arizona, was critically injured when a man went on a shooting spree during a constituents meeting held by the congresswoman outside a Tucson-area supermarket. Six people died in the attack and another 13, including Giffords, were wounded.
The gunman, 22-year-old Jared Lee Loughner, was taken into custody at the scene. He pleaded guilty to 19 of the crimes he was charged with, including killing six people. As part of the plea agreement, federal prosecutors agreed not to seek the death penalty against him. On November 8, 2012, Loughner was sentenced to life in prison without parole.