It may come as a surprise to those who think I rank the Beatles as my favorite group of all time. I don’t. Oh, I thought they were groundbreaking and their music will live forever, but they finish second among my favorites because, believe it or not, there was a group I enjoyed more.

Back in the late 60s and early 70s, they – with their original lineup, affectionately known as the “Frantic Four” – were amazing, compiling more British hit singles than any band in history, even if Pictures of Matchstick Men was their only Top 40 song in America.

And the primary reason I enjoyed Quo so much was Rick Parfitt, their extraordinary rhythm guitarist and vocalist – and yes, my favorite all time musician.
Rick passed away in 2016 and while I was wandering around trying to create a video medley for today, I thought about him and thought…
“why not?” 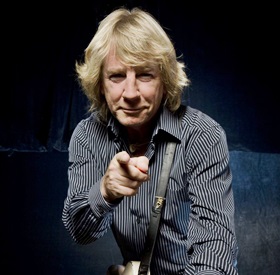