“All over the world on November 11, 1918, people were celebrating, dancing in the streets, drinking champagne, hailing the armistice that meant the end of the war. But at the front there was no celebration. The quietness, unearthly in its penetration, began to eat into their souls. The men sat around log fires, the first they had ever had at the front. They were trying to reassure themselves that there were no enemy batteries spying on them from the next hill and no German bombing planes approaching to blast them out of existence. They talked in low tones. They were nervous.”
Colonel Thomas Gowenlock
Intelligence Officer, American 1st Division 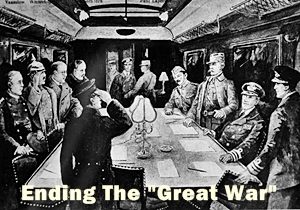 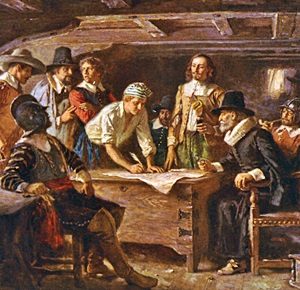 1620 – The Mayflower Compact, the first governing document of Plymouth Colony, was signed aboard ship.
The Mayflower was originally bound for the Colony of Virginia, but storms forced them to anchor at the hook of Cape Cod in what is now Massachusetts. That inspired some of the passengers to proclaim that since the settlement would not be made in the agreed upon Virginia territory, they “would use their own liberty; for none had power to command them.”
To prevent this, many of the other colonists chose to establish a government. The Mayflower Compact was in essence a contract in which the settlers consented to follow the compact’s rules and regulations for the sake of order and survival. 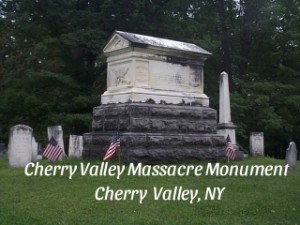 1778 – Patriot Colonel Ichabod Alden refused to believe intelligence about an approaching hostile force.
Alden ignored warnings that local natives were planning an attack and left 200 to 300 men stationed to defend Cherry Valley – east of Cooperstown, New York – ill-prepared for the eventual arrival of 600 Iroquois.
As a result, a combined force of Loyalists and Iroquois killed more than 40 Patriots, including Alden, and took at least an additional 70 prisoners, in what is known today as the Cherry Valley Massacre. 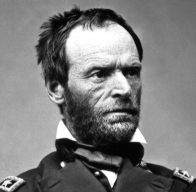 1863 – General William Tecumseh Sherman issued orders from a home in downtown Rome, GA to General John Corse.
“Tonight destroy all public property not needed by your command, all foundries, mills, workshops, warehouses, railroad depots, or other storehouses convenient to the railroad, together with all wagon shops, tanneries or other factories useful to the enemy. Destroy all bridges immediately, then move your command to Kingston.”
The burning of Rome marked the beginning of Sherman’s March to the Sea. 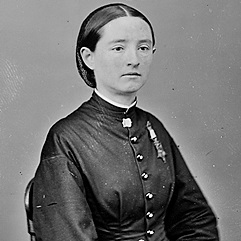 1865 – Dr. Mary Edwards Walker received the U.S. Medal of Honor, becoming the first woman to receive the award.
She served at the First Battle of Bull Run (Manassas), and worked as an unpaid field surgeon near the Union front lines, including at the Battle of Fredericksburg and the Battle of Chickamauga.
After the war, Walker sought a retroactive brevet or commission to validate her service. President Andrew Johnson directed Secretary of War Edwin Stanton to study the legality of the issue, and he solicited an opinion from the Army’s Judge Advocate General, who determined that there was no precedent for commissioning a female, but that a “commendatory acknowledgment” could be issued in lieu of the commission.
That opinion led Johnson to personally award the Medal of Honor as an alternative, and Dr. Walker was cited for her role as the first female surgeon in the U.S. Army.
In 1917, however, the Medal of Honor Board struck Dr. Walker’s name from the list of recipients stating the citation should go only to a member of the armed services who had distinguished themselves in “actual combat with an enemy.”
Dr. Walker refused to give up her medal and wore it until her death in 1919.
In 1977, the official records regarding Dr. Walker’s case were corrected and 58 years after her death, her medal was finally reinstated. 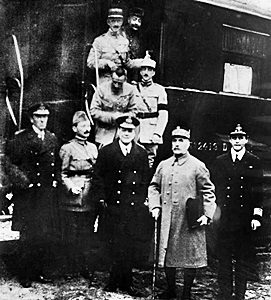 1918 – At the 11th hour on the 11th day of the 11th month of 1918, World War I – the Great War – ended.
Germany, without manpower or supplies, and faced with imminent invasion, signed an armistice agreement with the Allies in a railroad car outside Compiégne, France.
The First World War left nine million soldiers dead and 21 million wounded, with Germany, Russia, Austria-Hungary, France, and Great Britain each losing nearly a million or more lives.
In addition, at least five million civilians died from disease, starvation, or exposure.

1920 – On the second anniversary of the end of World War I, the burials of unknown soldiers took place simultaneously in London and Paris.
The graves were the first to honor the unknown dead of the First World War, and were the first examples of a tomb of the Unknown Soldier. 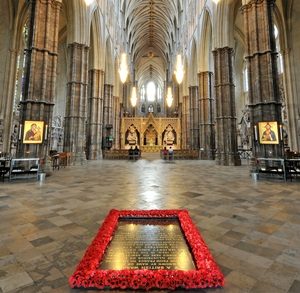 In London, the casket was interred in the West Nave of Westminster Abbey and the grave was then capped with a black Belgian marble stone. Of the 3,000-plus graves in the Abbey, it is the only tombstone on which it is forbidden to walk. 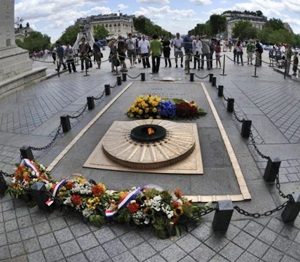 Under the Arc de Triomphe in Paris lies the French Tomb of the Unknown Soldier. This somber site is a flat tomb with a perpetual flame. One of the most sacred sites in France, the tomb lies flat in the pavement and is outlined with copper bricks and low chain border. It is surrounded by the court of honor of the Arc.
In 1961, President John F. Kennedy and First Lady Jacqueline Kennedy paid their respects at the Tomb of the Unknown Soldier in Paris, accompanied by French President Charles de Gaulle.
After the 1963 assassination of President Kennedy, Mrs. Kennedy remembered the eternal flame at the Arc de Triomphe and requested that an eternal flame be placed next to her husband’s grave at Arlington National Cemetery. 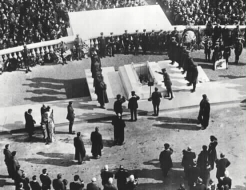 1921 – Exactly three years after the end of World War I, the Tomb of the Unknowns was dedicated at Arlington Cemetery in Virginia.
Two days before, an unknown American soldier, who had fallen somewhere on a World War I battlefield, arrived at the nation’s capital from a military cemetery in France.
On Armistice Day, in the presence of President Warren Harding and other government, military, and international dignitaries, the Unknown Soldier was buried with highest honors beside the Memorial Amphitheater.
As the soldier was lowered to his final resting place, a two-inch layer of soil brought from France was placed below his coffin so that he might rest forever atop the earth on which he died.

1938 – Kate Smith sang “God Bless America” for the very first time. It would later become her signature song.
Irving Berlin wrote the tune in 1917 but never released it until Smith sang it for the first time on her radio broadcast. 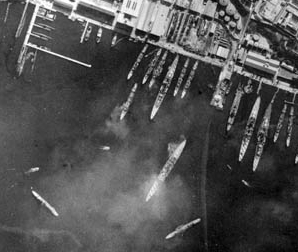 1940 – The Italian Navy lost half of its cruisers in one night when British naval forces and aircraft blew them out of the water at the Battle of Taranto.
Two cruisers were badly mauled, two auxiliaries were sunk outright, and the fuel tank farm and repair depot sheds were savaged.
The Italians suffered 660 casualties. The British lost 2 men. 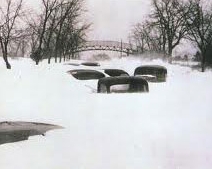 1940 – A blizzard cut a 1,000-mile-wide path through the middle of the country, from Kansas to Michigan.
Early morning temperatures in the mid-60s plummeted over 50 degrees by nightfall when an intense low pressure system tracked from the southern plains into Wisconsin, pulling Gulf of Mexico moisture up from the south and pulled down an arctic air mass from the north.
The blizzard – which lasted through the next day – resulted in snowfalls of up to 27 inches, winds of 50-80 mph, and 20-foot snowdrifts.
A total of 145 deaths were blamed on the storm. 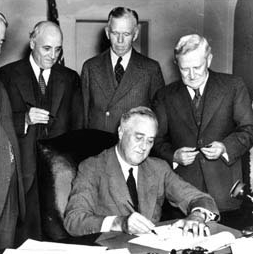 1942 – Congress approved lowering the draft age to 18 and raising the upper limit to age 37.
In September 1940, Congress, by wide margins in both houses, had passed the Burke-Wadsworth Act and the first peacetime draft was imposed in the history of the U.S. The registration of men between the ages of 21 and 36 began exactly one month later.
But by 1942, with the United States now a participant in World War II, and not merely a neutral bystander, the draft ages had to be expanded; men 18 to 37 were now eligible. 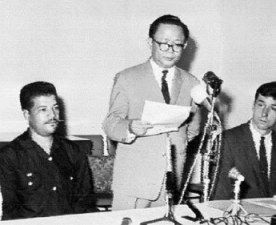 1967 – Three U.S. prisoners of war, two of them African American, were released by the Viet Cong in a ceremony in Phnom Penh, Cambodia.
The three men were turned over to Tom Hayden, a “new left” anti-war activist. U.S. officials in Saigon said that the released prisoners had been “brainwashed,” but the State Department denied it.
The Viet Cong said that the release was a response to anti-war protests in the U.S. and a gesture towards the “courageous struggle” of blacks in the United States. 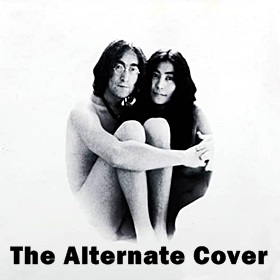 1968 – John Lennon and Yoko Ono released their first album (Unfinished Music No. 1: Two Virgins.
I have used the alternate cover. This was the suggested album cover by Capitol Records but John refused to use because it “wasn’t honest enough.”
I decided not to use the actual cover, not because I dislike “honesty” but rather because I’m pretty sure everyone has seen it before … and frankly, neither Lennon nor Ono were all that visually spectacular in the nude.
When Capitol Records refused to release the album with John’s “honest” photo, it was picked up by Tetragrammaton, a small label previously known for spoken word releases. Tetragrammaton issued ‘Two Virgins’ in a brown paper sleeve, with a cutaway through which Lennon and Ono’s faces could be seen. 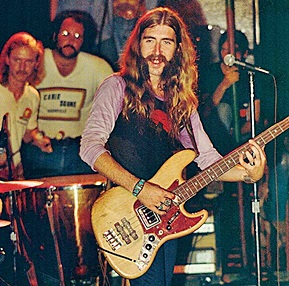 1972 – Berry Oakley, bass guitarist with The Allman Brothers Band, died in a motorcycle accident. He was 24.
Oakley’s accident took place within three blocks of where bandmate Duane Allman had died in a motorcycle accident thirteen months earlier.
Oakley said he was okay after the accident, declined medical treatment, and went home. Three hours later, he was rushed to the hospital but died of cerebral swelling caused by a fractured skull. 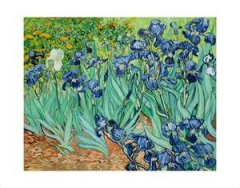 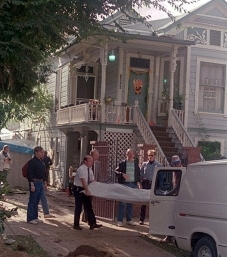 1988 – Authorities unearthed a corpse buried in the lawn of 59-year-old Dorothea Puente’s home in Sacramento, California.
Puente operated a residential home for elderly people, and an investigation led to the discovery of six more bodies buried on her property.
Puente was a diagnosed schizophrenic who had already been in trouble with the law. She had previously served prison time for check forgery, as well as drugging and robbing people she met in bars.
After her release, she opened a boarding house for elderly people. Beginning in 1986, social worker Peggy Nickerson sent 19 clients to Puente’s home. When some of the residents mysteriously disappeared, Nickerson grew suspicious.
Although all the buried bodies were found to contain traces of the sedative Dalmane, the coroner was never able to identify an exact cause of death.
Still, during a trial that lasted five months and included 3,100 exhibits, prosecutors were able to prove beyond a reasonable doubt that Puente had murdered her boarders, most likely to collect their Social Security checks.
Though she was formally charged with nine counts of murder and convicted on three, authorities suspected that Puente might have been responsible for as many as 25 deaths. 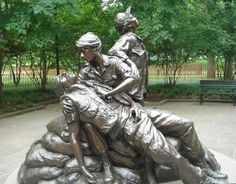 1993 – The Vietnam Women’s Memorial, dedicated to the women of the United States who served in the Vietnam War, was formally dedicated in Washington, D.C. 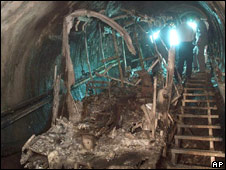 2000 – A cable car taking skiers to Kitzsteinhorn Mountain in the Austrian Alps caught fire as it passed through a mountain tunnel.
156 people died, with only 11 people managing to survive the fire, which was caused by an illegal space heater. 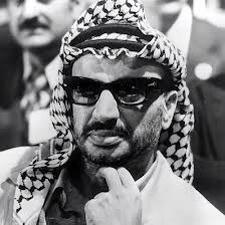 2004 – Yasser Arafat, the Chairman of the Palestine Liberation Organization, died of a stroke at the age of 75. 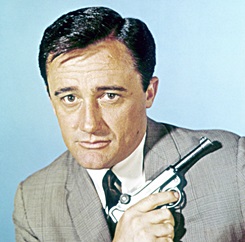 2016 – Actor Robert Vaughn died after a brief battle with leukemia. He was 83.
His film credits included The Magnificent Seven, The Bridge at Remagen, Superman III, The Delta Force, and The Young Philadelphians, which earned him a 1960 Academy Award nomination for Best Supporting Actor.
But he will always be remembered for his role as Napoleon Solo on The Man From U.N.C.L.E., television’s answer to James Bond.
Pairing Vaughn with David McCallum’s Russian Illya Kuryakin, The Man From U.N.C.L.E. was an early example of Cold War detente in the battle against global evildoers. 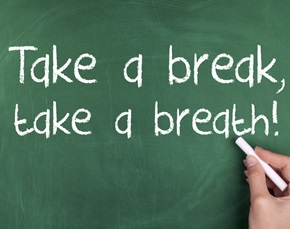 Note: I’m not discontinuing the history lessons but I am going to be taking a break for a few days. I’ll be back soon!