“Every two years the American politics industry fills the airwaves with the most virulent, scurrilous, wall-to-wall character assassination of nearly every political practitioner in the country – and then declares itself puzzled that America has lost trust in its politicians.”
~Charles Krauthammer 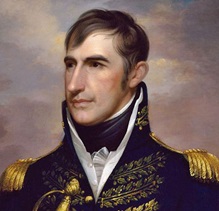 1811 – The Battle of Tippecanoe, between U.S. forces led by William Henry Harrison, Governor of the Indiana Territory – and future U.S. president – and Native American warriors associated with Shawnee leader Tecumseh, was fought near the Tippecanoe River in present day Lafayette, Indiana.
Harrison had marched with an army of about 1,000 men to disperse a confederacy of Native Americans. Tecumseh, not yet ready to oppose the United States by force, was away recruiting allies when Harrison’s army arrived.
Tenskwatawa, a spiritual leader but not a military man, was in charge. Harrison camped near Prophetstown on November 6 and arranged to meet with Tenskwatawa the following day. Early the next morning, warriors from Prophetstown attacked Harrison’s army.
Although the outnumbered attackers took Harrison’s army by surprise, Harrison and his men stood their ground for more than two hours. The Natives were ultimately repulsed when their ammunition ran low. After the battle, the Natives abandoned Prophetstown. Harrison’s men burned the town and returned home. 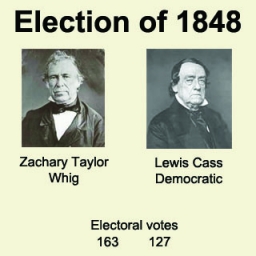 1848 – General Zachary Taylor, who had emerged as a hero of the Mexican War, defeated the Democratic candidate, Lewis Cass, and was elected the 12th President of the United States.
With Taylor as their candidate, the Whig Party won their second – William Henry Harrison was the first – and last victory in a Presidential election.
The contest was the first presidential election that took place on the same day in every state, and it was the first time that Election Day was statutorily a Tuesday. 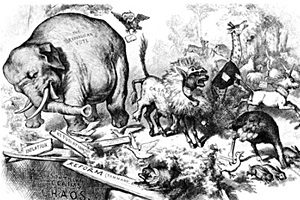 1874 – A cartoon by Thomas Nast in Harper’s Weekly, was the first use of an elephant as a symbol for the Republican Party.
The Republican elephant debuted three days after the Democrats gained a majority in the House of Representatives for the first time after the Civil War.
A staunch Republican, Nast derided his fellow Republicans, depicting them as an elephant – bearing the title of “Republican Vote” – bounding clumsily towards a pit labeled “Inflation and Chaos” while a donkey in lion’s skin (center) scared off other animals (voters).
The implication was that the New York Herald (the jackass) had flustered Republican voters with its allegation that President Ulysses S. Grant was a modern Caesar, scheming for a third term. 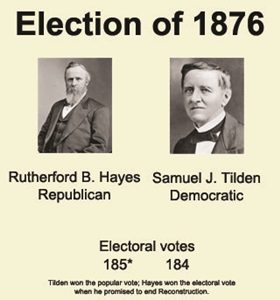 1876 – The results of the election between New York Governor Samuel Tilden and Rutherford B. Hayes, the Governor of Ohio, made it, up to that time, the most controversial in history.
When the votes were counted, Tilden had won the popular vote, 4.2 million to 4 million. Even in previous elections in which the popular vote was close, the winner of the popular vote total was the winner in the Electoral College.
Of the votes counted, Tilden had won 184 electoral votes, to 165 for Hayes. That wasn’t enough because the winner needed 185.
A total of 20 electoral votes had not been cast because of election disputes in Florida, Louisiana, Oregon, and South Carolina.
After some serious back-door wrangling, representatives in those states cast all of their electoral votes for Hayes, giving him the needed 185.
This came to be known as the Compromise of 1877 because it resulted in the end of Reconstruction and the withdrawal of federal troops from the South.
The Democratic Party had given up a short-term gain (the presidency) in exchange for a long-term gain. 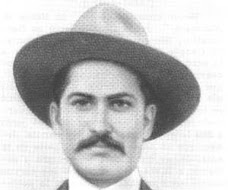 1907 – Jesús García, a Mexican railroad brakeman, was killed trying to keep a train loaded with dynamite from exploding near Nacozari, Sonora, Mexico.
The train was stopped in the town, on its way to Douglas, Arizona, when García noticed hay on the roof of a car containing dynamite had caught fire.
He drove the train in reverse downhill at full-steam out of the town before the dynamite exploded, killing him and sparing the population of the mining town. 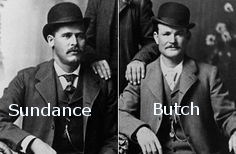 1917 – Led by Bolshevik Party leader Vladimir Lenin, leftist revolutionaries in Russia launched a nearly bloodless coup d’état against the provisional government of Alexander Kerensky.
The Bolsheviks and their allies occupied government buildings and other strategic locations in the Russian capital of Petrograd (now St. Petersburg) and within two days had formed a new government with Lenin as its head.
Bolshevik Russia, later renamed the Union of Soviet Socialist Republics, was the world’s first Marxist state. 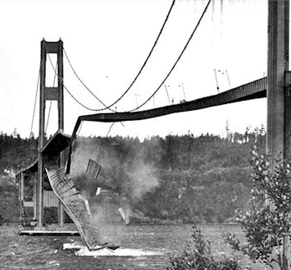 1940 – Only four months after its completion, the Tacoma Narrows Bridge in Washington State suffered a spectacular collapse.
When it opened, the Tacoma Narrows Bridge was the third-longest suspension bridge in the world. Built to replace the ferry system that took commuters from Tacoma to the Gig Harbor Peninsula, the bridge spanned 2,800 feet and took three years to build.
Experts still disagree on the exact cause of the bridge’s destruction, but most agree the collapse was due to wind-induced vibrations. 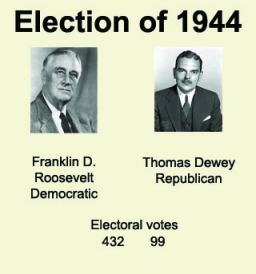 1944 – With World War II still raging, and with the success of the D-Day invasion fresh in voters’ minds, President Franklin Roosevelt ran for a fourth term and soundly defeated Republican Thomas Dewey. 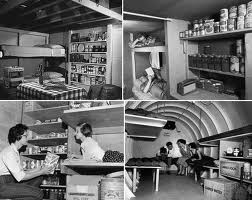 1957 – The final report from a special committee called by President Dwight Eisenhower to review the nation’s defense readiness indicates that the U.S. was falling far behind the Soviets in missile capabilities, and urged a vigorous campaign to build fallout shelters to protect American citizens.
Headed by Ford Foundation Chairman H. Rowan Gaither, the committee concluded that the United States was in danger of losing a war against the Soviets.
Only massive increases in the military budget, particularly an accelerated program of missile construction, could hope to deter Soviet aggression.
It also suggested that American citizens were completely unprotected from nuclear attack and proposed a $30 billion program to construct nationwide fallout shelters. 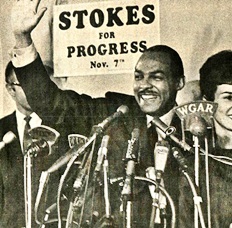 1967 – Carl Stokes, a member of the Ohio House of representatives, defeated Seth Taft, the grandson of former President William Howard Taft, with 50.5% of the vote.
With his victory, Stokes became the first African-American elected to head one of the ten biggest cities in the United States.
Earlier in 1967, Walter Washington had become the first black to lead an American city (Washington, D.C.) but he was appointed – not elected – to the position. 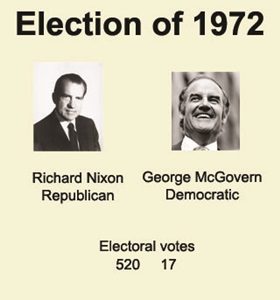 1972 – President Richard Nixon easily won re-election with a landslide win over South Dakota Senator George McGovern.
With only 55 percent of the electorate voting, the lowest turnout since 1948, Nixon carried every state but Massachusetts, taking 97 percent of the electoral votes.
McGovern had said during the campaign, “If I were President, it would take me twenty-four hours and the stroke of a pen to terminate all military operations in Southeast Asia.”
He said he would withdraw all American troops within 90 days of taking office, whether or not U.S. prisoners of war were released.
To many Americans, including many Democrats, McGovern’s position was tantamount to total capitulation in Southeast Asia. Given this radical alternative, Nixon seemed a better choice to most voters. 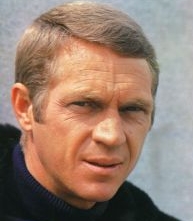 1980 – Actor Steve McQueen died of cancer at the age of 50.
McQueen’s career had a humble beginning as his first starring movie role came in 1958’s The Blob, but later that year, he began a three-year run as bounty hunter Josh Randall on television’s Wanted Dead or Alive.
After that series ended, his film career took off with epic movies such as The Magnificent Seven, The Great Escape, The Sand Pebbles, Papillion, Bullitt, and The Towering Inferno, and many more. 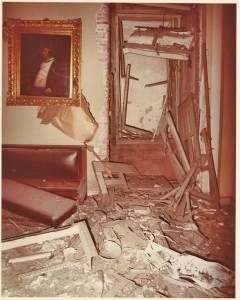 1983 – An explosion tore through the second floor of the United States Capitol north wing.
Minutes before the blast, a caller claiming to represent the “Armed Resistance Unit” had warned the Capitol switchboard that a bomb had been placed near the Chamber in retaliation for recent U.S. military involvement in Grenada and Lebanon.
The force of the device, hidden under a bench at the eastern end of the corridor outside the Chamber, blew off the door to the office of Democratic Leader Robert Byrd, and sent a shower of pulverized brick, plaster, and glass into the Republican cloakroom.
The explosion caused no structural damage to the Capitol, but a portrait of Daniel Webster received the explosion’s full force. The blast tore away Webster’s face and left it scattered across the floor in one-inch canvas shards.
Over the coming months, a conservator painstakingly restored the painting to a credible, if somewhat diminished, version of the original. 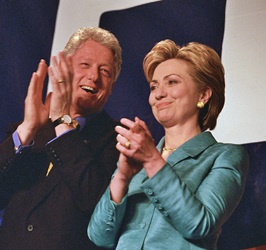 2009 – First Lady Hillary Rodham Clinton was elected to the U.S. Senate from New York.
She became the first wife of the president of the United States to be a candidate for elected office.
Clinton faced Rick Lazio, a Republican member of the U.S. House of Representatives who represented New York’s 2nd congressional district. Throughout the campaign, she was accused of “carpetbagging” because she had never resided in New York State or participated in the state’s politics before the 2000 Senate Race.
Clinton won the election with 55 percent of the vote to Lazio’s 43 percent. 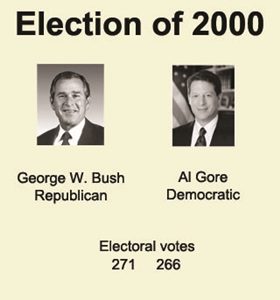 2000 – Vote counting went deep into the night; by the next day, every state but Florida had a declared winner.
At that time, Vice President Al Gore had won 20 states and D.C., giving him 266 electoral votes, and Texas Governor George W. Bush had won 30 states, giving him 246 electoral votes.
Florida’s votes were yet to be finally counted, and the 25 electoral votes for that state would determine the winner.
When the final tally was initially announced, Bush was ahead by less than 1,000 votes (out of nearly six million votes cast).
Florida state law required that a difference that small be followed up with a recount, by machine. Gore requested a recount by hand in four counties.
The process became an endless parade of legal motions, and the result was a series of legal decisions that culminated in a December 12th U.S. Supreme Court decision that halted all vote-counting, with the result that Bush won Florida … and the election. 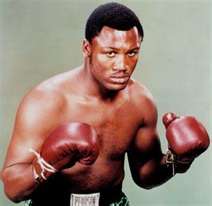 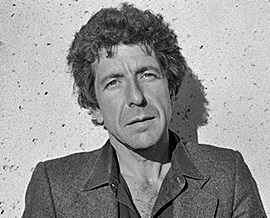 2016 – Leonard Cohen died at the age of 82. Leukemia was a contributing cause
Cohen never had what can be called major hits, but the poet, songwriter and singer wielded enormous influence as a kind of pop music laureate, writing literate, evocative material that was admired and frequently recorded by others.
In some cases they became hits – Suzanne and Bird On A Wire for Judy Collins, for instance, or Hallelujah for the late Jeff Buckley.
Inducting him into the Rock and Roll Hall of Fame in 2008, Lou Reed said – quite correctly – that Cohen was among the “highest and most influential echelon of songwriters.”