“Being the richest man in the cemetery doesn’t matter to me. Going to bed at night saying we’ve done something wonderful, that’s what matters to me.”
~Steve Jobs 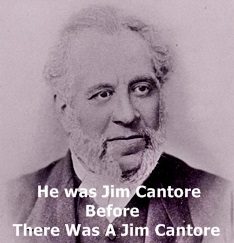 1869 – The Saxby Gale devastated the Bay of Fundy region in Canada.
The hurricane – which claimed 40 lives – caused extensive destruction to port facilities and communities along the Bay of Fundy coast in both New Brunswick and Nova Scotia as well as the coast of Maine.
The storm (which predated the practice of naming hurricanes) was given the name “Saxby” in honor of Lieutenant Stephen Martin Saxby, a naval instructor with the Royal Navy and an amateur astronomer.
Saxby had written a letter of warning, published December 25, 1868 (10 months before the storm hit) in London’s The Standard newspaper in which he noted the astronomical forces predicted for October 5, 1869, would produce extremely high tides in the North Atlantic Ocean during the height of hurricane season. 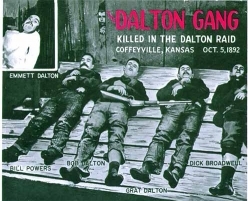 1892 – The Dalton Gang attempted a daring daylight robbery of two Coffeyville, Kansas banks at the same time. Two of the Dalton brothers – Bob and Emmett – headed for the First National, while Grat Dalton led Dick Broadwell and Bill Powers into the Condon Bank.
While Bob and Emmett were stuffing money into a grain sack, word was spreading around the town that the banks were being robbed. When the Dalton brothers walked out of the bank, a hail of bullets forced them back into the building. Regrouping, they tried to flee out the back door of the bank, but the townspeople were waiting for them and Bob was killed.
In the Condon Bank, a cashier managed to delay Grat Dalton, Powers, and Broadwell with the classic claim that the vault was on a time lock and couldn’t be opened.
That gave the townspeople enough time to gather force, and suddenly a bullet smashed through the bank window and hit Broadwell in the arm. The three men bolted out the door and fled down a back alley. But like their friends next door, they were immediately shot and killed, this time by a local livery stable owner and a barber.
When the battle was over, the people of Coffeyville had destroyed the Dalton Gang, killing every member except for Emmett Dalton. But their victory was not without a price: the Dalton’s took four townspeople to their graves with them.
After recovering from 23 gunshot wounds, Emmett was tried and sentenced to life in prison, although after 14 years, he was paroled. 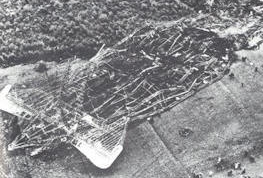 1930 – A British blimp crashed in Beauvais, France, killing 48 people. The blimp, 777 feet long and weighing 150 tons, was Great Britain’s largest.
The trip was problematic from the start. First, the crew accidentally released four tons of water ballast – the weight carried in order to control altitude, at the outset of the trip. They also took off straight into a storm hovering over the English Channel, even though dirigibles were known to be dangerous in bad weather.
As soon as the blimp reached the air over France, it was not able to hold a level altitude and was flying only 250 feet above the town of Poix. The pilots were not aware of the problem because of the dark night. Soon, the blimp was skimming the trees of Beauvais. Eventually it hit a small ridge and the impact ignited the blimp’s hydrogen supply. 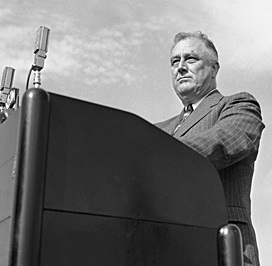 1937 – President Franklin D. Roosevelt called for a “quarantine” of aggressor nations.
No countries were directly mentioned in the speech, although it was interpreted as referring to the Empire of Japan, the Kingdom of Italy, and Nazi Germany.
Roosevelt cited the need for an international “quarantine” to counter the “epidemic of world lawlessness” by aggressive nations.
He saw such moves as a needed alternative to the existing policy of U.S. neutrality and nonintervention – one that marked not only the prevailing mood in Congress but also the views of most Americans. While he said he favored new economic pressures, he stopped well short of urging an aggressive military 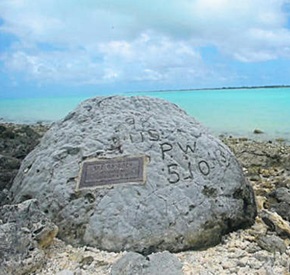 1943 – Ninety-eight American POWs were executed by Japanese forces on Wake Island.
After a successful American air raid on the Japanese garrison on Wake Island, Adm. Shigematsu Sakaibara ordered the execution of all 98 captured Americans who were on the island.
Ninety-seven were taken to the northern end of the island, blindfolded and machine-gunned.
One prisoner escaped, carving the message “98 US PW 5-10-43” on a large coral rock near where the victims had been hastily buried in a mass grave. That man, whose identity was never discovered, was re-captured and beheaded personally by Admiral Sakaibara three weeks later.
Sakaibara and his subordinate, Lt. Cmdr. Shoichi Tachibana, were later sentenced to death after their convictions for this and other war crimes. Tachibana’s sentence was later commuted to life in prison.
Sakaibara was executed by hanging on June 18, 1947, on the island of Guam. 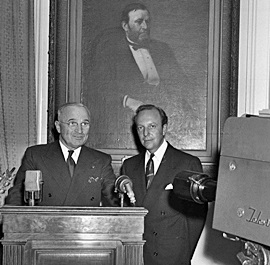 1947 – President Harry Truman made the first-ever televised presidential address from the White House, asking Americans to cut back on their use of grain in order to help starving Europeans. At the time of Truman’s food-conservation speech, Europe was still recovering from World War II and suffering from famine.
Truman worried that if the U.S. didn’t provide food aid, his administration’s Marshall Plan for European economic recovery would fall apart.
He asked farmers and distillers to reduce grain use and requested that the public voluntarily forgo meat on Tuesdays, eggs and poultry on Thursdays and save a slice of bread each day. 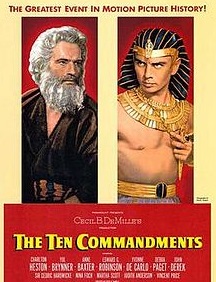 1956 – The Ten Commandments premiered.
The film starred Charlton Heston in the lead role of Moses, Yul Brynner as Rameses, Anne Baxter as Nefretiri, and John Derek as Joshua.
Filmed on location in Egypt, Mount Sinai and the Sinai Peninsula, the film was producer/director Cecil B. DeMille’s last and most successful work.
Despite its huge success at the box office, the film was not a big winner at the 1957 Academy Awards. It was nominated for seven Oscars, including Best Picture, but its sole win was the Academy Award for Best Visual Effects (John P. Fulton).
Snub Factoid: Heston, Brynner, Baxter and Derek not only did not win Academy Awards for their performances, they weren’t even nominated! 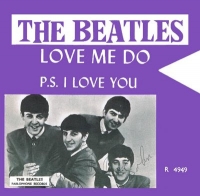 1962 – The Beatles released their first single (Love Me Do / P.S. I Love You) in England.
It peaked at #17 on the British charts. When the single was released in the United States in 1964 – smack dab in the middle of Beatlemania – it became a #1 hit.
Drumming Factoid: As most people already know – but just in case you don’t – the song was recorded on three occasions; with original drummer Pete Best on June 6, 1962, with Ringo Starr on September 4, 1962, and finally with session drummer Andy White on September 11, 1962.
The debut single featured Starr on drums, the Pete Best version was included on Anthology 1 and the Andy White version was included on the Beatles’ debut UK album, Please Please Me. 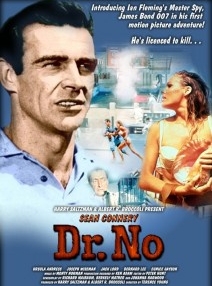 1962 – Dr. No, the first of the James Bond films, premiered at the London Pavilion.
The North American premiere was on May 8, 1963
Upon release, Dr. No received a mixed critical reception. Time called Bond a “blithering bounder” and the Vatican condemned the film, describing it as “a dangerous mixture of violence, vulgarity, sadism and sex.”
On the other hand, The Daily Express said “Dr. No is fun all the way and even the sex is harmless,” and The Observer said it was “full of submerged self-parody.”
007 Factoid: Before signing Sean Connery to play Bond, producers Harry Saltzman and Albert “Cubby” Broccoli wanted Cary Grant to play the role but they discarded the idea when Grant committed to only one feature film, and the producers decided to go after someone who could be part of a series.
Other actors considered for the role included Patrick McGoohan (who rejected the idea) and David Niven (he played the character in the 1967 parody Casino Royale). 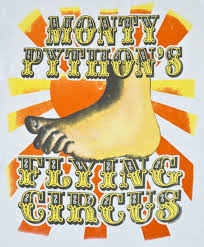 1969 – Monty Python’s Flying Circus premiered on BBC One.
While the first three seasons contained 13 episodes each, the fourth ended after just six.
In the summer of 1974, PBS television station KERA in Dallas, Texas, started airing episodes of the program.
Ratings shot through the roof, providing an encouraging sign to the other 100 PBS stations that had signed up to begin airing the show in October 1974 – exactly five years after their BBC debut. 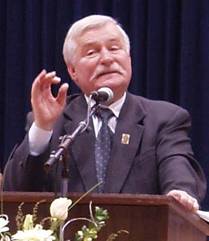 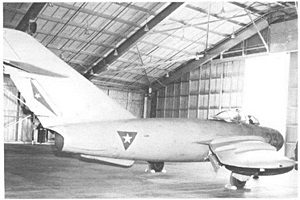 1969 – In an embarrassing breach of the United States’ air-defense capability, Lieutenant Eduardo Jimenez, a Cuban defector entered U.S. air space undetected and landed a Soviet-made MiG-17 at Homestead Air Force Base, south of Miami, Florida.
Air Force One was at the base at the time, waiting to return President Richard Nixon to Washington. The base was subsequently put on continuous alert, and it opened a new radar tracking facility to prevent the repetition of a similar incident in the future. 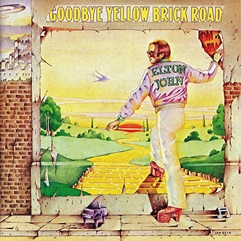 1973 – Elton John released the Goodbye Yellow Brick Road album.
The album has sold more than 30 million copies worldwide and is widely regarded as John’s best. Among the 17 tracks, the album contained three hit singles in the U.S.: Bennie and The Jets (#1 Billboard hit), Goodbye Yellow Brick Road (#2 Billboard hit) and Saturday Night’s Alright for Fighting (#12 Billboard hit).
Before you tell me I’ve forgotten Candle In The Wind, it was not released as a single in the U.S. 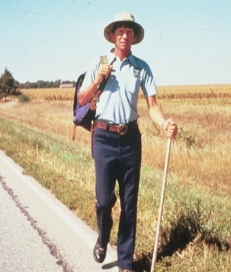 1974 – American David Kunst completed the first round-the-world journey on foot, taking four years and 21 pairs of shoes to complete the 14,500-mile journey across the land masses of four continents. 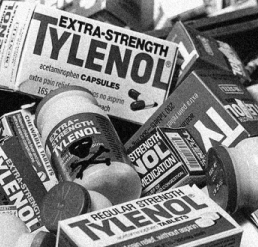 1982 – Johnson & Johnson initiated a nationwide product recall in the United States for all products in its Tylenol brand after several bottles in Chicago were found to have been laced with cyanide, resulting in seven deaths. 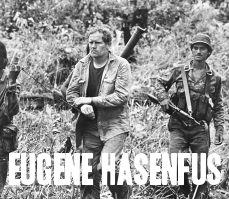 1986 – Eugene Hasenfus was captured by troops of the Sandinista regime in Nicaragua after the plane in which he was flying was shot down.
Under questioning, Hasenfus confessed that he was shipping military supplies into Nicaragua for use by the Contras, an anti-Sandinista force that had been created and funded by the United States. Most dramatically, he claimed that operation was really run by the U.S. Central Intelligence Agency.
Despite denials from President Ronald Reagan, Vice President George Bush, and other officials that the CIA had any connection with the flight, persistent investigations by journalists and Congress began to unravel the so-called Iran-Contra scandal.
The scandal involved the secret sale of U.S. weapons to Iran (which was supposed to help in the release of U.S. hostages in the Middle East). Some of the proceeds from these sales were used to covertly fund the Contra war in Nicaragua.
A Congressional investigation, begun in December 1986, revealed the scheme to the public. Many figures from the Reagan administration were called to testify, including Marine Lieutenant Colonel Oliver North, who was the action officer in charge of coordinating both the arms sales and funneling of money to the Contras.
The resulting scandal rocked the Reagan administration and shook the public’s confidence in the U.S. government; 11 members of the President’s administration eventually were convicted of a variety of charges related to the scandal. 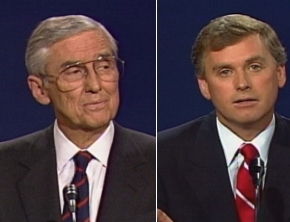 1988 – Democrat Lloyd Bentsen lambasted Republican Dan Quayle during their vice-presidential debate after Quayle was asked if he had a plan in mind about what he would do “if it fell to you to become President of the United States.” 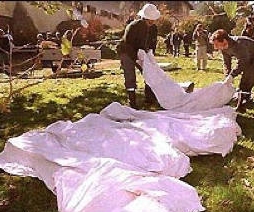 1994 – Forty-eight members of the apocalyptical Order of the Solar Temple sect were discovered by Swiss police following a mass suicide.
Twenty-three of the bodies were found in a concealed chamber beneath a remote farmhouse in the village of Cheiry, 48 miles north-east of Geneva.
An additional 25 bodies, including some children, were recovered in three burnt-out chalets in Granges-sur-Salvan, 47 miles east of Geneva, near the Italian border. 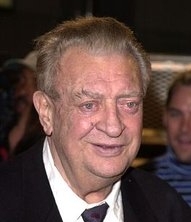 2004 – Comedian/Actor Rodney Dangerfield (Easy Money, Caddyshack, Back To School) died from complications of heart valve replacement surgery. He was 82. 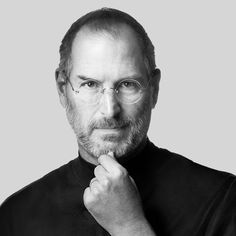 2011 – Steve Jobs, co-founder and CEO of Apple Inc., died due to complications from a relapse of his previously treated pancreatic cancer, resulting in respiratory arrest. He was 56.