“The reason I’m not more political is because I have music. And from a young age, I needed it. After prison, my father came to America, joined the Army, fought in Vietnam – and was exposed to Agent Orange. He died a slow, horrible death. Music was my escape.”
~Gloria Estafan 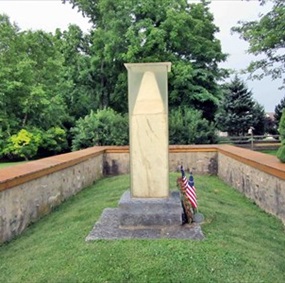 1777 – Outside Paoli, Pennsylvania, General Charles Grey and nearly 5,000 British soldiers launched a surprise attack on a small regiment of Patriot troops commanded by General Anthony Wayne in what became known as the Paoli Massacre.
With the help of a Loyalist spy who provided a secret password and led them to the camp, General Grey and the British launched the successful attack on the unsuspecting men of the Pennsylvania regiment, stabbing them to death as they slept.
The British soldiers took no prisoners during the attack, stabbing or setting fire to those who tried to surrender.
Before it was over, a total of 272 Americans were killed, wounded or missing from Wayne’s division after the battle. Fifty-three of those men are buried in a mass grave on the monument site shown above. 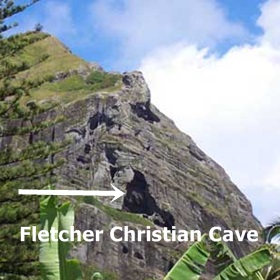 1793 – Fletcher Christian died at the age of 28.
He was the master’s mate on board HMS Bounty during commanding Lieutenant William Bligh’s voyage back from Tahiti.
On April 28, 1789, Christian seized command of the ship, an act forever remembered as the Mutiny on The Bounty. The mutinous crew eventually landed on Pitcairn Island.
An American seal-hunting ship visited Pitcairn in 1808 and found only one mutineer, John Adams, still alive along with nine Tahitian women.
Adams and Maimiti – Christian’s Tahitian wife – claimed Christian had been murdered on this date fifteen years earlier during a conflict between Tahitian men and the mutineers.
However, John Adams gave conflicting accounts of Christian’s death to visitors on ships that subsequently visited Pitcairn. He was variously said to have died of natural causes, committed suicide, gone insane and been murdered.
Regardless of how he died, Christian’s grave was unmarked and has been lost to history. There is some speculation his body may be buried near Gannet’s Ridge, where, as the photo above indicates, there is a large cave in which Christian spent most of his time peering out to sea, watching for advancing ships. 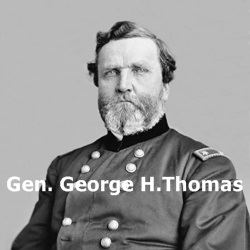 1863 – The two-day Battle of Chickamauga ended in Georgia.
In one of the bloodiest battles of the Civil War, the Confederate Army of Tennessee – with considerable help from the Army of Northern Virginia – drove the Union Army of the Cumberland from Chickamauga Creek in northern Georgia back into Chattanooga, Tennessee.
The first day had ended in a stalemate but that night, additional Confederate troops arrived under the command of James Longstreet, part of Robert E. Lee’s Army of Northern Virginia. His appearance turned the tide for the South.
Around noon on September 20, the stalemate broke when Union General William Rosecrans ordered General Thomas Wood to move his division to plug a gap in the Yankee line.
Although no such actually gap existed, there certainly was one when Wood moved his division, and Longstreet’s troops marched straight through it, collapsing the Union line in chaos.
When most of the Union army – including Rosecrans – began a hasty retreat to nearby Chattanooga, Gen. George H. Thomas took control of what was left of the Union army. Thomas stubbornly held his ground on Snodgrass Hill (Horseshoe Ridge) and halted the Rebel attack, which allowed him to successfully withdraw without further losses. His action earned him the nickname “The Rock of Chickamauga”.
The Battle of Chickamauga was the first major battle of the war fought in Georgia, the most significant Union defeat in the Western Theater, and involved the second-highest number of casualties after the Battle of Gettysburg.
Chickamauga resulted in 18,500 Confederate casualties and 16,100 Union casualties. 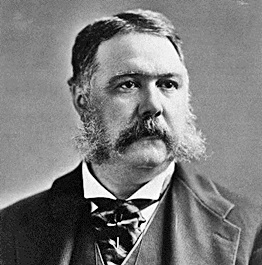 1881 – One day after the death of President James Garfield, Vice-President Chester Arthur took the oath of office to replace him.
The occasion marked the second time the U.S. had three presidents in one year. Earlier in the year, Garfield had replaced Rutherford B. Hayes in the White House (a similar situation occurred in 1841, when Martin Van Buren, William Henry Harrison and John Tyler all held the office).
Arthur quickly came into conflict with Garfield’s cabinet, most of whom had argued against his selection as Garfield’s running mate. Within six months, all but one of the cabinet members Arthur had inherited from Garfield had resigned.
Only Secretary of War Robert Todd Lincoln remained for the entirety of Arthur’s term. 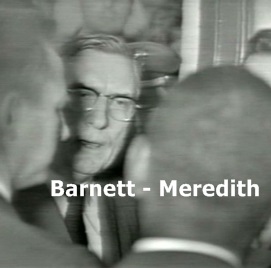 1962 – James Meredith, an African-American, was blocked from enrolling at the University of Mississippi by Gov. Ross R. Barnett.
The Democratic Governor had, one week earlier, declared “no school will be integrated in Mississippi while I am your governor.”
The state legislature quickly passed a law that denied admission to any person “who has a crime of moral turpitude against him” or who had been convicted of any felony offense or not pardoned.
The same day it became law, Meredith was accused and convicted of “false voter registration,” in absentia, in Jackson County. The conviction against Meredith was trumped up: Meredith both owned land in northern Mississippi and was registered to vote in Jackson, where he lived.
U.S. Attorney General Robert F. Kennedy had a series of phone calls with Governor Barnett, and on September 29, President John F. Kennedy turned up the heat by issuing a proclamation commanding all persons engaged in the obstruction of the laws and the orders of the courts to “cease and desist therefrom and to disperse and retire peaceably forthwith.”
On October 1, 1962, Meredith became the first African-American student to enroll at the University of Mississippi. 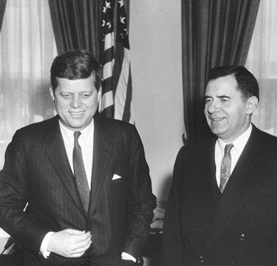 1963 – President John F. Kennedy suggested that the Soviet Union and the United States cooperate on a mission to mount an expedition to the moon.
Soviet Foreign Minister Andrei Gromyko applauded Kennedy’s idea and called it a “good sign,” but refused to comment on the proposal for a joint trip to the moon.
To Washington insiders, the idea that America would cooperate with the Soviets in sending a man to the moon seemed unbelievable.
What might have come of Kennedy’s idea is unknown. Just two months later, he was assassinated in Dallas, Texas. His successor, Lyndon Johnson, abandoned the idea of cooperating with the Soviets. 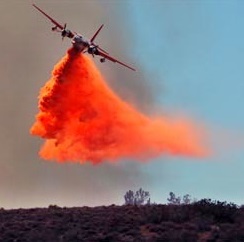 1968 – U.S. military spokesmen defended the use of defoliants in Vietnam at a news conference in Saigon, claiming that the use of the agents in selected areas of South Vietnam had neither appreciably altered the country’s ecology, nor produced any harmful effects on human or animal life.
Defoliation had been used in Vietnam since 1961 to reduce the dense jungle foliage so communist forces could not use it for cover, as well as to deny the enemy use of crops needed for subsistence. During a nine-year period ending in 1971, over 19 million gallons of three major herbicides (Agents Orange, White, and Blue) would be used in Vietnam.
Despite the U.S. military’s assurances, the use of these agents was controversial, both during and after the war, because of the questions about long-term ecological impacts and the effect on humans who were either sprayed or handled the chemicals.
Beginning in the late 1970s, Vietnam veterans began to cite the herbicides, especially Agent Orange, as the cause of health problems ranging from skin rashes to cancer and birth defects in their children. 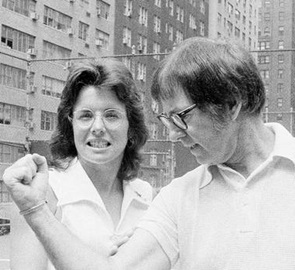 1973 – In a highly publicized “Battle of the Sexes” tennis match, top women’s player Billie Jean King, 29, met Bobby Riggs, 55, a former No. 1 ranked men’s player.
Riggs had boasted that women were inferior, that they couldn’t handle the pressure of the game and that even at his age he could beat any female player.
The match was a huge media event, witnessed in person by over 30,000 spectators at the Houston Astrodome and by another 50 million TV viewers worldwide.
King beat Riggs 6-4, 6-3, 6-3. 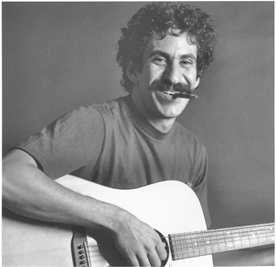 1973 – Singer-Songwriter Jim Croce died at the age of 30 when his chartered Beechcraft E18S crashed into a tree while taking off from the Natchitoches Regional Airport in Natchitoches, Louisiana.
Croce had several enduring hit songs during his too short career: You Don’t Mess Around With Jim, Bad, Bad Leroy Brown, Time In A Bottle, I Got A Name, and Operator
The pilot and four other passengers also died in the crash, including Croce’s 24-year old guitarist, Maury Muehleisen. 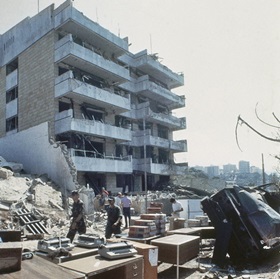 1984 – The Shi’a Islamic militant group Hezbollah, with support and direction from the Islamic Republic of Iran, carried out a suicide car bombing targeting the U.S. embassy annex in East Beirut, Lebanon. The attack killed twenty Lebanese and two American soldiers.
18 months earlier, another attack, this one on the United States embassy in Beirut had killed 63 people, including 17 Americans. 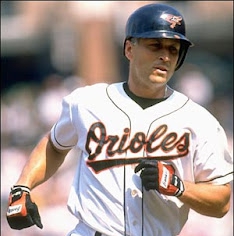 1998 – After playing in a record 2,632 consecutive games over 16 seasons, Cal Ripken Jr. of the Baltimore Orioles sat out a game against the New York Yankees. 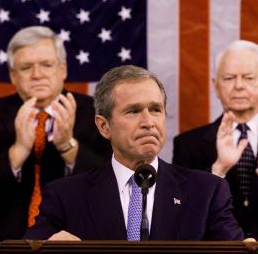 2001 – In an address to a joint session of Congress and the American people, President George W. Bush declared a war on terror.
“Our war on terror begins with al-Qaeda, but it does not end there. It will not end until every terrorist group of global reach has been found, stopped, and defeated.” 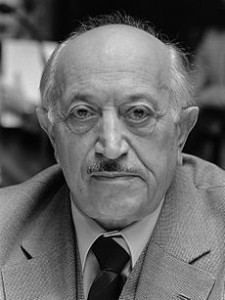 2005 – Simon Wiesenthal, a Jewish Austrian Holocaust survivor who became famous after World War II for his work as a Nazi hunter, died at the age of 96.
He played a role – though not as large as he claimed – in locating Adolf Eichmann, who was captured in Buenos Aires in 1960 (and later hanged after being found guilty of war crimes).
Wiesenthal worked closely with the Austrian justice ministry to prepare a dossier on Franz Stangl (commandant of the Sobibór and Treblinka extermination camps who was convicted for the mass murder of 900,000 people), who was sentenced to life imprisonment in 1971. 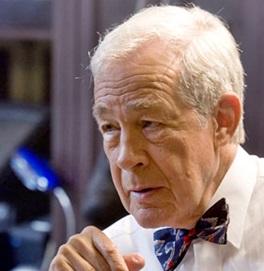 2015 – Actor Jack Larson, forever remembered for playing the role of Daily Planet photographer/cub reporter Jimmy Olsen on the television series Adventures of Superman, died at the age of 87. 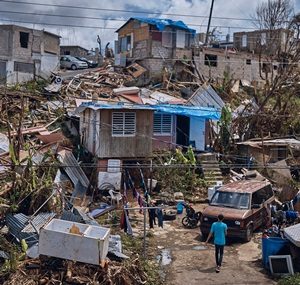 2017 – Hurricane Maria made landfall in Puerto Rico as a powerful Category 4 hurricane, resulting in over 3,000 deaths, $90 billion in damage, and a major humanitarian crisis that has yet to be resolved..