“The suppression of the people of a society begins, in my mind, with the censorship of the written or spoken word. It was so in Nazi Germany. It is so in many places today where those in power are afraid of the consequences of an informed and educated people.”
~John Denver
PMRC Hearings 1796 – President George Washington’s farewell address to “friends and fellow-citizens” after 20 years of public service to the United States was published in the American Daily Advertiser.
The lengthy headline of The Address of Gen. Washington to the People of America on His Declining the Presidency of the United States announced his intention to decline a third term in office.
Washington reflected on the emerging issues of the American political landscape in 1796, expressed his support for the government eight years after the adoption of the Constitution, defended his administration’s record, and warned Americans about the “dangers of political parties to the country.” 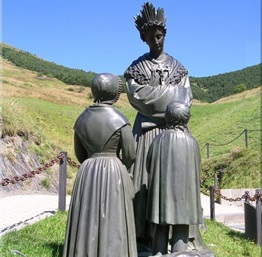 1846 – Melanie Calvat (15) and Maximin Giraud (11) reported a supernatural appearance by the Blessed Virgin Mary had occurred at La Salette-Fallavaux, France.
The children were returning from the mountain where they had been minding cows and reported seeing “a beautiful lady” on Mount Sous-Les Baisses. It is important to note that Maximin later said, “We never said that this lady was the Blessed Virgin but we always said that it was a beautiful lady.”
According to their account, she wept as she spoke to them (first in French, then in their own dialect), giving the children a message of “Reconciliation”.
After giving a secret to each child, the apparition walked up the hill and vanished.
After five years of investigation, the Bishop of Grenoble announced that the apparition was likely to be a true revelation, and on the fifth anniversary of the sighting, Pope Pius IX formally approved the public devotion and prayers to Our Lady of La Salette. 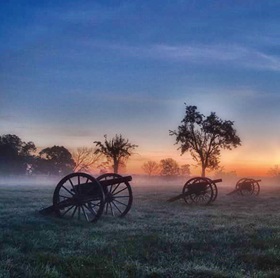 1864 – At the Third Battle of Winchester: Union troops under General Philip Sheridan defeated a Confederate force commanded by General Jubal Early.
With over 50,000 troops engaged it was the largest battle fought in the Shenandoah Valley and was not only militarily decisive in that region of Virginia but also played a role in securing Abraham Lincoln’s election in 1864. 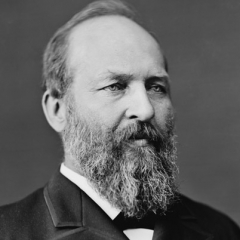 1881 – President James Garfield, who had been in office just under four months, succumbed to bullet wounds inflicted by an assassin 80 days earlier.
The assassin, Charles Guiteau – a disgruntled man who had unsuccessfully sought an appointment to the U.S. consul in Paris – was deemed sane by a jury, convicted of murder and hanged on June 30, 1882. 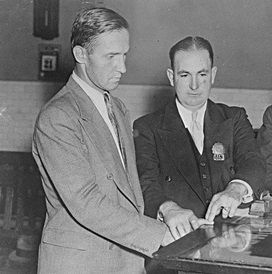 1934 – Bruno Hauptmann was arrested in New York City and charged with the 1932 kidnap-murder of the infant son of aviator Charles Lindbergh.
The $50,000 demanded in a ransom note had been delivered, but the infant’s body was found in the woods 4 miles from the family home.
At the so-called “Trial of the Century,” evidence against Hauptmann included: $14,600 of the ransom money was found in his garage; testimony alleging handwriting and spelling similarities to that found on the ransom notes; testimony that lumber used in constructing the ladder probably originated in Hauptmann’s house; he had been absent from work on the day of the ransom payment and had quit his job two days later.
Hauptmann’s attorney, Edward J. Reilly, argued that the evidence against Hauptmann was entirely circumstantial, as no reliable witness had placed Hauptmann at the scene of the crime, nor were his fingerprints found on the ladder used to access the child’s bedroom, the ransom notes, or anywhere in the nursery.
Hauptmann was convicted, and on April 3, 1936, he was executed in the electric chair at the New Jersey State Prison. 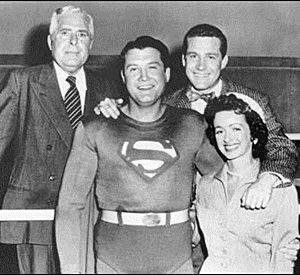 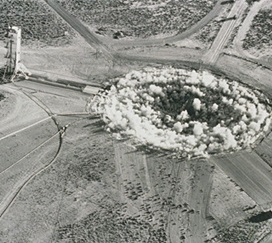 1957 – The United States detonated a 1.7 kiloton nuclear weapon in an underground tunnel at the Nevada Test Site, a 1,375 square mile research center located 65 miles north of Las Vegas.
The test, known as Rainier, was the first fully contained underground detonation and produced – according to government reports – no radioactive fallout. 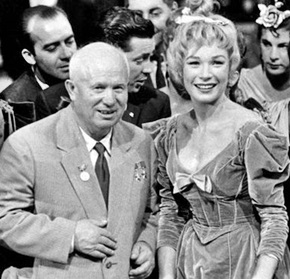 1959 – In one of the more surreal days in the history of the Cold War, Soviet leader Nikita Khrushchev – visiting the U.S. for a summit meeting with President Dwight Eisenhower – had several outbursts while visiting Los Angeles.
After an entertaining tour of the Can Can film set – where he chatted with Shirley MacLaine, Louis Jourdan, Maurice Chevalier and Frank Sinatra – the problems started when Twentieth Century Fox President Spyros P. Skouras introduced Khrushchev at Los Angeles Town Hall.
Skouras – an ardent anticommunist – irritated Khrushchev by referring to the premier’s famous statement that Russia would “bury” as capitalism.
Addressing Skouras directly, Khrushchev stated, “If you want to go on with the arms race, very well. We accept that challenge. As for the output of rockets – well, they are on the assembly line. This is a most serious question. It is one of life or death, ladies and gentlemen. One of war and peace.”
Khrushchev’s anger increased when he learned that he would not be allowed to visit Disneyland. Government authorities feared that the crowds would pose a safety hazard for the premier.
Khrushchev, still fuming about the debate with Skouras, exploded. “I would very much like to go and see Disneyland. But then, we cannot guarantee your security, they say. Then what must I do? Commit suicide? What is it? Is there an epidemic of cholera there or something? Or have gangsters taken hold of the place that can destroy me?”
Khrushchev left Los Angeles the next morning. 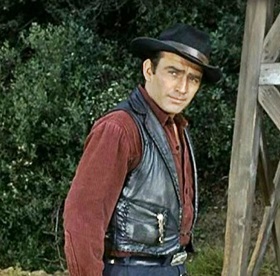 1962 – The Virginian, starring James Drury, premiered on NBC, beginning a nine-year run. It was the first western to air in 90-minute installments. 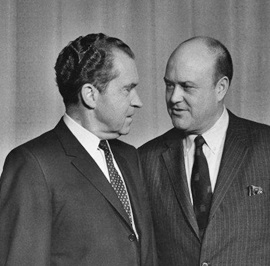 1969 – Alongside Defense Secretary Melvin Laird, President Richard Nixon announced the cancellation of the draft calls for November and December. He reduced the draft call by 50,000 (32,000 in November and 18,000 in December).
This move accompanied his twin program of turning the war over to the South Vietnamese concurrent with U.S. troop withdrawals and was calculated to quell antiwar protests by students returning to college campuses after the summer.
That certainly wasn’t the end of the draft, though. Far from it.
The Selective Service System instead underwent a dramatic overhaul. Congress approved a plan to establish a lottery and on Nov. 26, 1969 – just five days before the lottery – Nixon signed the measure into law. 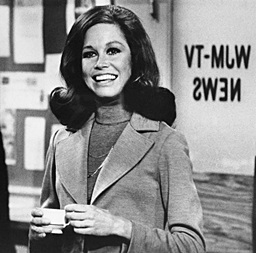 1970 – The Mary Tyler Moore Show premiered on CBS, beginning a seven year run.
Moore played the role of Mary Richards, associate producer at the fictional WJM news program in Minneapolis. Edward Asner co-starred as Mary’s boss Lou Grant, and Ted Knight played the role of Ted Baxter, the bumbling WJM newscaster.
Other co-stars throughout the series’ run included Valerie Harper, Cloris Leachman, Gavin MacLeod, Georgia Engel, and Betty White.
It is generally regarded as one of the most outstanding television series in history. 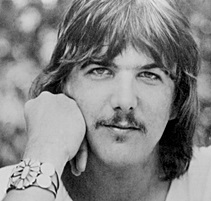 1973 – 26-year-old musician Gram Parsons died of a drug overdose (morphine and tequila) in a California motel room.
Parsons played with The Byrds on their seminal album Sweetheart Of The Rodeo before forming the Flying Burrito Brothers and later released two celebrated solo albums.
His death inspired one of the more bizarre automobile-related crimes on record: Two of his friends stashed his body in a borrowed hearse and drove it into the middle of the Joshua Tree National Park, where they doused it with gasoline and set it on fire. 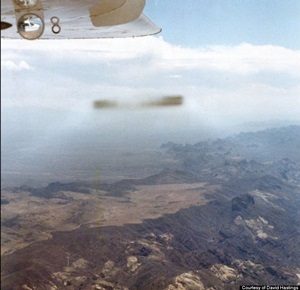 1976 – When two Imperial Iranian Air Force F-4 Phantom II jets flew out to investigate an unidentified flying object, both independently lost instrumentation and communications as they approached, only to have them restored upon withdrawal.
One of the aircraft also reported suffering temporary weapons systems failure, while preparing to open fire. 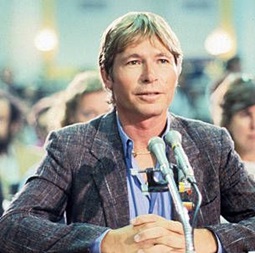 1985 – Representatives from the Parents Music Resource Center (including Tipper Gore), three musicians – Frank Zappa, Dee Snider, and John Denver – and Senators Paula Hawkins and Al Gore testified before the Senate Commerce, Science and Transportation Committee on the subject of obscenity in rock music.
Frank Zappa: “The PMRC proposal is an ill-conceived piece of nonsense which fails to deliver any real benefits to children, infringes the civil liberties of people who are not children, and promises to keep the courts busy for years dealing with the interpretation and enforcement problems inherent in the proposal’s design.”
Dee Snider: “It is my job as a parent to monitor what my children see, hear, and read during their preteen years. The full responsibility for this falls on the shoulders of my wife and I, because there is no one else capable of making these judgments for us. There is no authority who has the right or the necessary insight to make these judgments, not myself, not the Federal Government, not some recording industry committee, not the PTA, not the RIAA, and certainly not the PMRC.”
John Denver: “I’ve had experience with this sort of censorship. My song Rocky Mountain High was banned from many radio stations as a drug-related song.
This was obviously done by people who had never seen or been to the Rocky Mountains and also had never experienced the elation, the celebration of life, or the joy in living that one feels when he observes something as wondrous as the Perseids meteor shower, on a moonless and cloudless night, when there are so many stars that you have a shadow from the starlight, and you’re out camping with your friends, your best friends, and introducing them to one of nature’s most spectacular light shows for the very first time.
Obviously a clear case of misinterpretation.
Mr. Chairman, what assurance have I that any national panel to review my music would make any better judgment?” 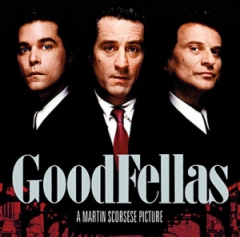 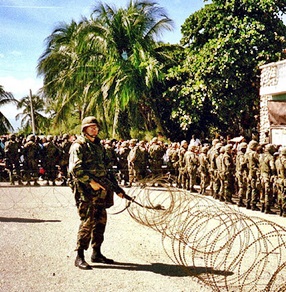 1994 – 20,000 U.S. troops landed unopposed in Haiti to oversee the country’s transition to democracy.
Reacting to evidence of atrocities committed by Haiti’s military dictators, the United Nations had authorized the use of force to restore President Jean-Bertrand Aristide.
On the eve of the American invasion, a diplomatic delegation led by former U.S. President Jimmy Carter brokered a last-minute agreement with Haiti’s military to give up power.
Bloodshed was prevented, and on October 15 Aristide returned. 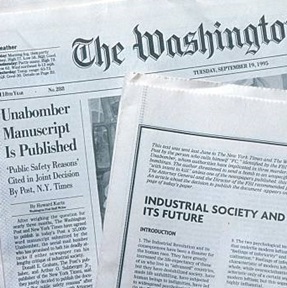 1995 – The Washington Post published a 35,000-word manifesto written by the Unabomber, who since the late 1970s had eluded authorities while carrying out a series of bombings across the United States that killed 3 people and injured another 23.
After reading the manifesto, David Kaczynski realized the writing style was similar to that of his brother, Theodore Kaczynski, and notified the F.B.I. On April 3, 1996, Ted Kaczynski was arrested at his isolated cabin near Lincoln, Montana, where investigators found evidence linking him to the Unabomber crimes. 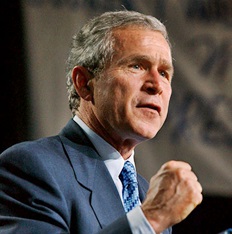 2002 – President George W. Bush asked Congress to authorize the use of military force against Iraq, citing alleged threats to the U.S. by the regime of Iraqi President Saddam Hussein, as well as Iraq’s failure to comply with United Nations disarmament resolutions.
Congress passed the resolution on October 11.
Five months later, on March 19, 2003, the U.S. and its allies began invading Iraq. Though one of the Bush administration’s oft-cited causes for war was Iraq’s possession of weapons of mass destruction, none were found following the regime’s collapse.
WMD Factoid: While the failure to locate any weapons of mass destruction has consistently been placed on Bush’s doorstep, it is important to remember his was not the first administration to make the claim.
On August 14, 1998, the U.S. Congress passed – and President Bill Clinton signed – Public Law 105-235, a resolution that stated, in part, “that international economic sanctions remain in place until Iraq discloses and destroys its weapons of mass destruction programs and capabilities and undertakes unconditionally never to resume such activities.” 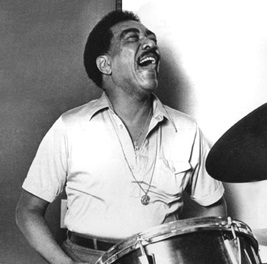 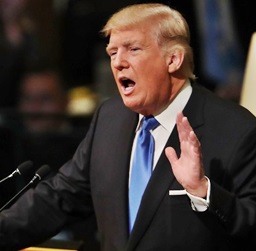 2017 – President Donald Trump addressed the United Nations in what was perhaps the most aggressive speech ever delivered by a U.S. president at the U.N.
He described North Korea as a murderous and menacing regime and said, “The United States has great strength and patience, but if it is forced to defend itself or its allies, we will have no choice but to totally destroy North Korea.”
He also blasted Iran, calling it “an economically depleted rogue state whose chief exports are violence, bloodshed and chaos.”