“We have again lost some of the noblest men in the south. The wounds generally in more of a serious nature than heretofore. I pronounce this battle to have been the most terrible in artillery than any one of the preceding fights. I never was so tired of shelling in my life. I hate cannons.”
~Dr. James Boulware
Antietam Diary, 6th South Carolina Infantry

“Rifles are shot to pieces in the hands of the soldiers. Canteens and haversacks are riddled with bullets, the dead and wounded go down in scores.”
~Captain Benjamin F. Cook
Antietam Diary, 12th Massachusetts Infantry 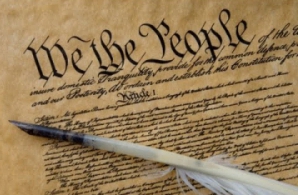 1787 – The Constitution of the United States of America was signed by 39 of 42 delegates present at the conclusion of the Constitutional Convention in Philadelphia.
Several of the delegates were disappointed in the result, a makeshift series of unfortunate compromises, resulting in three of them (Edmund Randolph of Virginia, George Mason of Virginia, and Elbridge Gerry of Massachusetts) refusing to sign.
Of the thirty-nine signers, Benjamin Franklin said “There are several parts of this Constitution which I do not at present approve, but I am not sure I shall never approve them.” He would accept the Constitution, he said, “because I expect no better and because I am not sure that it is not the best.” 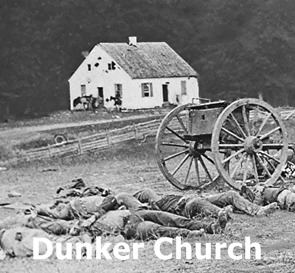 1862 – This is going to be very long and detailed.
Confederate and Union troops in the Civil War clashed near Maryland’s Antietam Creek in the bloodiest one-day battle in American history.
The Battle of Antietam actually consisted of three battles.
Beginning at dawn, Union General Joseph Hooker’s men stormed Confederate General Thomas J. “Stonewall” Jackson’s troops around the Dunker Church, the West Woods, and David Miller’s cornfield. The Federals made repeated attacks, but furious Rebel counterattacks kept the Yankees in check. 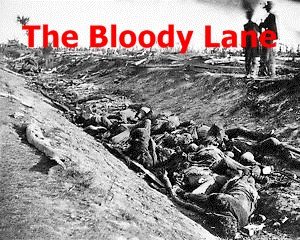 By early afternoon, the fighting moved south to the middle of the battlefield. Union troops under General Edwin Sumner inflicted devastating casualties on the Confederates along a sunken road that became known as “Bloody Lane”. Almost 2,000 Confederate dead and wounded piled up on this road.
McClellan now had a chance to exploit the opening in the Confederate center but he refused to apply reserves because he believed Lee’s force to be much larger than it actually was. 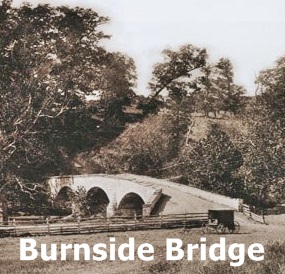 Late in the day, Union General Ambrose Burnside’s corps finally got into action, crossing the stone bridge over Antietam Creek and rolling up the Confederate right. At a crucial moment, A.P. Hill’s division arrived from Harpers Ferry and counterattacked, driving back Burnside and saving the day.
Although outnumbered two-to-one (Lee had committed his entire force of 38,000 men at Antietam, while McClellan, in yet another of his cautious mistakes, sent in less than three-quarters of his 87,000 available forces), the Confederates had fought the Union to a standstill.
The battle was over by 5:30 p.m. On the morning of September 18, Lee’s army prepared to defend against a Federal assault that never came. After an improvised truce for both sides to recover and exchange their wounded, Lee’s forces began withdrawing across the Potomac that evening to return to Virginia.
The losses for the one-day battle were staggering. Union casualties included 2,108 dead, 9,549 wounded, and 753 missing or captured, while Confederate casualties numbered 1,567 dead, 7,752 wounded, and 1,108 missing or captured.
Although the battle was tactically inconclusive, the Confederate troops had withdrawn first from the battlefield, making it, in military terms, a Union victory.
It was a sufficiently significant victory to give Lincoln the confidence to announce his Emancipation Proclamation, which discouraged the British and French governments from pursuing any potential plans to recognize the Confederacy.
As I said, very long, but necessarily so. 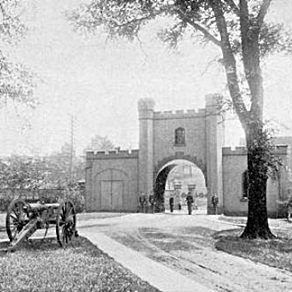 1862 – The Allegheny Arsenal in Pittsburgh, PA – an important supply and manufacturing center for the Union Army during the Civil War – was rocked by three explosions. 78 workers, mostly young women, were killed.
Although a coroner’s jury held that the accident had been the result of the negligent conduct of Col. John Symington and his subordinates in allowing loose powder to accumulate on the roadway, Symington was acquitted. 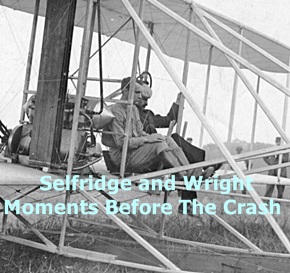 1908 – Thomas Selfridge, a first lieutenant in the U.S. Army became the first person to die in an airplane crash. He was killed while seated as a passenger on a demonstration flight piloted by Orville Wright.
Wright had visited Fort Myer in Virginia to demonstrate the 1908 Wright Military Flyer for the U.S. Army Signal Corps division.
On September 17, Selfridge arranged to be his passenger and Wright piloted the craft. The Flyer was carrying more weight than it had ever done before; the combined weight of the two men was approximately 320 pounds.
The Flyer circled Fort Myer four times at a height of 150 feet. Halfway through the fifth circuit, the right-hand propeller broke, losing thrust. The split propeller hit a guide wire bracing the rear vertical rudder. The wire tore out of its fastening and shattered the propeller; the rudder swiveled to the horizontal and sent the Flyer into a nosedive.
Wright shut off the engine and managed to glide to about 75 feet, but the craft hit the ground nose first. Both men were thrown forward against the remaining wires and Selfridge struck one of the wooden uprights of the framework, fracturing the base of his skull.
He underwent neurosurgery but died three hours later without regaining consciousness. 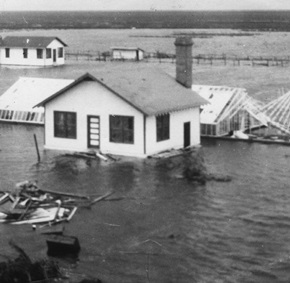 1928 – The Okeechobee hurricane made landfall near West Palm Beach, Florida with winds of 145 mph.
In the city, more than 1,711 homes were destroyed but the effects were most severe around Lake Okeechobee. The storm surge caused water to pour out of the southern edge of the lake, flooding hundreds of square miles to depths as great as 20 feet.
Hundreds of houses and buildings were swept away in the cities of Belle Glade, Canal Point, Chosen, Pahokee, and South Bay.
At least 2,500 people drowned. 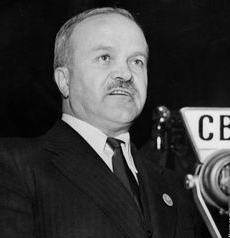 1939 – Soviet Foreign Minister Vyacheslav Molotov declared that the Polish government had ceased to exist, as the U.S.S.R. exercised the “fine print” of the Hitler-Stalin Non-aggression pact – the invasion and occupation of eastern Poland.
The 800,000-strong Soviet Red Army entered and created the Belarusian and Ukrainian fronts after invading the eastern regions of Poland. With no help from Western allies on the way, the Polish military ordered all units to evacuate Poland and reorganize in France. 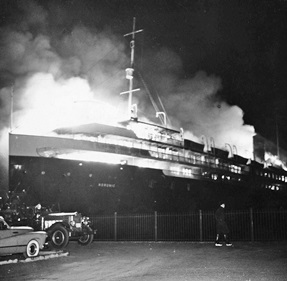 1949 – An early morning fire consumed the Canada Steamship Lines Great Lakes cruise liner Noronic – the most luxurious passenger steamer ever placed in service on the Great Lakes – in Toronto harbor.
118 of the 522 passengers – all of the victims were American – died. One member of the crew of 171 also perished.
No cause was ever determined. 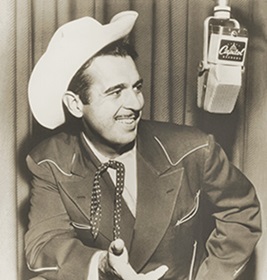 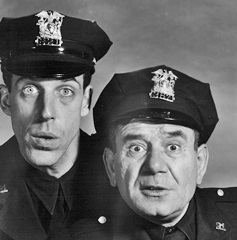 1961 – Car 54, Where Are You? premiered on NBC.
The series – which ran for two seasons – focused on the misadventures of New York City Police Department officers Gunther Toody (Joe E. Ross) and Francis Muldoon (Fred Gwynne), assigned to Patrol Car 54.
Car Factoid: The police cars used for the series were actually bright red and white, which appeared as the proper shade of gray for an NYPD car on black-and-white film. 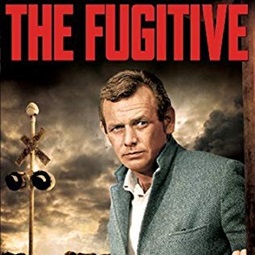 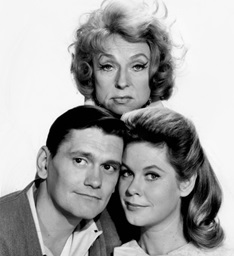 1964 – Bewitched premiered on ABC. The series ran for eight years. 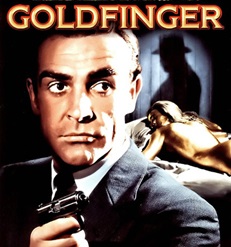 1964 – Goldfinger, the third installment in the James Bond series, premiered at the Odeon Leicester Square Theatre in London.
The film – starring Sean Connery, Gert Frobe and Honor Blackman – was filmed on a budget of $3 million and registered $125 million at the box office.
Shirley Bassey’s recording of the film theme song reached #8 on the Billboard Hot 100. 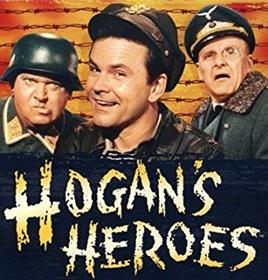 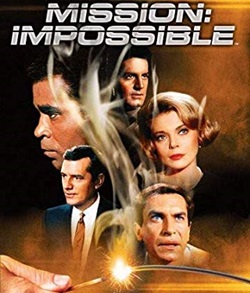 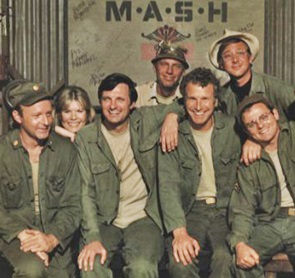 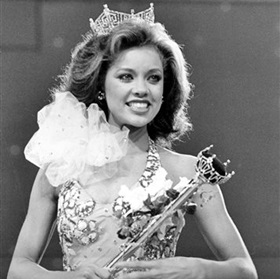 1983 – 20-year-old Vanessa Williams became the first African American to win the Miss America crown.
A scandal later erupted when nude photos surfaced of Williams that had reportedly been shot when she worked for a photographer before her pageant days.
She was forced to resign her title in July 1984. 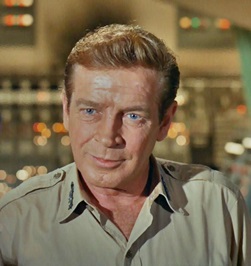 1984 – Actor Richard Basehart died at the age of 70 following a series of strokes.
He starred in several films, including He Walked By Night, Hitler, and Moby Dick, but is best remembered for his role of Admiral Harriman Nelson in the television series Voyage To The Bottom Of The Sea. 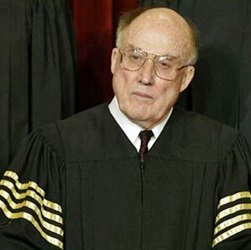 1986 – The Senate confirmed the nomination of William H. Rehnquist as the 16th chief justice of the United States.
Once confirmed, he led a Court that put the brakes on some of the excesses of the Earl Warren era while keeping pace with the sentiments of a majority of the country – generally siding with economic conservatives and against cultural conservatives. 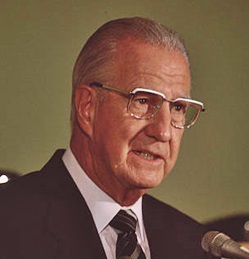 1996 – Former Vice President Spiro Agnew died after being hospitalized and diagnosed with an advanced, yet to that point undetected, form of leukemia. He was 77.
In 1973, he became the second U.S. Vice President to resign (the other was John C. Calhoun in 1832) but the first to do so for criminal reasons, 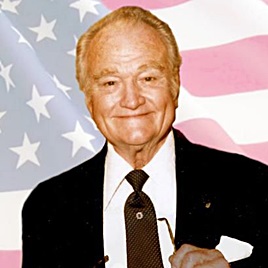 1997 – Richard “Red” Skelton, who had a 70-year career as an entertainer and artist, died at the age of 84.
The Red Skelton Show made its television premiere in 1951 on NBC. By 1954, Skelton’s program moved to CBS, where it was expanded to one hour and renamed The Red Skelton Hour in 1962.
Despite high ratings, the show was cancelled by CBS in 1970, as the network believed that more youth-oriented programs were needed to attract younger viewers. It was a strange decision, as his program had been one of the top ten highest rated shows for 17 of the 20 years he was on television.
“I just want to be known as a clown,” he once said, “because to me that’s the height of my profession. It means you can do everything – sing, dance and above all, make people laugh.”
Personal Opinion: Red Skelton had two attributes that set him apart: a talent for mime that could and did transcend the barrier of language, and the gift of evoking tears as readily as laughter – matchless abilities that are the hallmark of all great clowns. 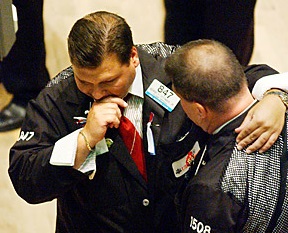 2001 – Wall Street trading resumed for the first time since the Sept. 11 terrorist attacks – its longest shutdown since the Depression; the Dow lost 684.81 points, its worst one-day point drop at the time.