“It’s hard to imagine the American stage without the face, the voice, and the limitless talent of Julie Harris. She has found happiness in her life’s work, and we thank her for sharing that happiness with the whole world.”
~President George W. Bush
Kennedy Center Honors 2005 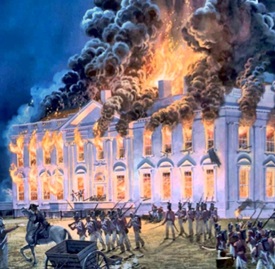 1814 – British troops entered Washington, D.C. and burned the White House in retaliation for the American attack on the city of York in Ontario, Canada, in June 1812.
They also burned the U.S. Capitol (destroying the wing containing the House of Representatives), the United States Treasury building, and the Department of War building.
Although President James Madison and his wife were able to return to Washington only three days later when British troops had moved on, they never again lived in the White House. Madison served the rest of his term residing at the city’s Octagon House.
It was not until 1817 that newly elected president James Monroe moved back into the reconstructed building. 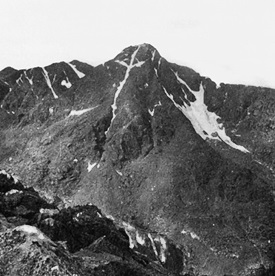 1873 – William Henry Jackson became the first person to photograph Colorado’s elusive Mount of the Holy Cross, providing reliable proof of its existence. Rumors had abounded for years that a natural cross of snow was hidden high in the rugged mountains of Colorado. Many claimed to have seen the cross, but others were unable to find it.
Jackson led a small party to the supposed site in north central Colorado. After thousands of years of erosion, two deep ravines had formed in the steep rocky face of a mountain peak. Intersecting at a 90-degree angle, the ravines sheltered the winter snow from the sun well after the rest of the mountain snow had melted away.
Jackson took his photos of the cross just as the first rays of the sun angled low across the crevassed face, emphasizing the lines of the cross. The resulting photo became one of Jackson’s most popular and famous images, and it ended any further doubts about the existence of the Mount of the Holy Cross. 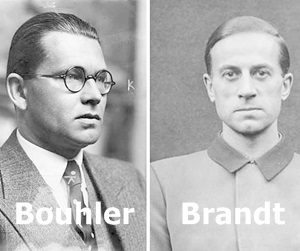 1941 – Adolf Hitler ordered the suspension of the T4 killings.
In October 1939, Hitler had signed a “euthanasia note” authorizing the Aktion T4 program — organized by his physician Dr. Karl Brandt and Nazi Chief of the Chancellery Philipp Bouhler – in which certain German physicians were authorized to select patients “deemed incurably sick, after most critical medical examination” and then administer to them a “mercy death.”
By the time Hitler suspended the program, the death total had reached 70,000
The termination of the T4 program did not end the killing of people with disabilities; from the end of 1941, the killing of adults and children continued less systematically to the end of the war on the local initiative of institute directors and party leaders.
German Federal Archives indicate that the total number of T4 victims in Germany and Austria from 1939 to 1945, was about 200,000 persons and that another 100,000 persons were victims in other European countries.
Brandt was tried and executed at Nuremburg. Bouhler was captured but committed suicide (after killing his wife) before he could be tried. 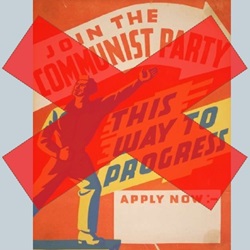 1954 – President Dwight Eisenhower signed the Communist Control Act, outlawing the Communist Party.
Although Senator Joseph McCarthy, the most famous of the “red hunters” in America, had been disgraced earlier in the summer when he tried to prove that communists were in the U.S. Army, most Americans still believed that communists were at work in their country.
The U.S. government used legislation such as the Communist Control Act to harass Communist Party members. More ominously, the government also used such acts to investigate and harass numerous other organizations that were deemed to have communist “leanings”.
These included the American Civil Liberties Union, labor unions, and the NAACP. By the mid-to-late 1960s, however, the Red Scare had run its course and a more liberal Supreme Court began to chip away at the immense tangle of anti-communist legislation that had been passed during the 1940s and 1950s.
Today, the Communist Party of the United States continues to exist and regularly runs candidates for local, state, and national elections. 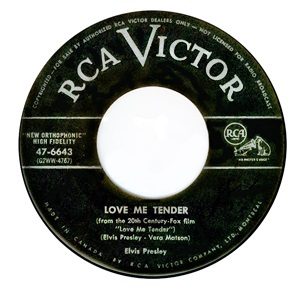 1956 – Elvis Presley recorded Love Me Tender.
If you look closely at the record label, you’ll see the names of Elvis and Vera Matson listed as co-writers of the song, but neither one of them wrote the words or the music.
The real songwriter was Ken Darby (Vera’s husband). Her name was listed as a co-writer because Colonel Tom Parker, Presley’s manager, thought it would “look better to have a female name on such a romantic song instead of two men.”
Parker made sure that Elvis was listed as co-writer on many of the early songs he recorded for RCA, although to his credit, Elvis never said he had co-written any of these songs.
Parker’s shameful practice denied the full royalties to the songwriters who did write the songs. 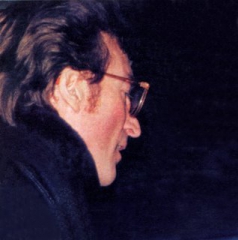 1981 – John Lennon’s murderer was sentenced in New York to 20 years to life in prison. The killer’s requests for parole have all been denied and he continues to serve his sentence at Wende Correctional Facility in Alden, NY.
I never type the killer’s name. He already has too much notoriety. I won’t show the photo of John signing an album cover for him on that fateful day because the murderer is in the frame. I have, instead, posted a rarely seen photo taken just seconds after John signed the cover.
It’s a photo of Lennon looking his soon-to-be killer in the eyes. 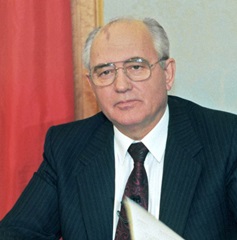 1991 – Mikhail Gorbachev, General Secretary of the Communist Party of the Soviet Union and President of the Soviet Union, advised the Central Committee to dissolve, resigned as general secretary and dissolved all party units within the government. Shortly afterward, the Supreme Soviet suspended all Party activities on Soviet territory.
In effect, Communist rule in the Soviet Union had ended. 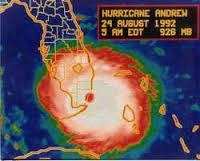 1992 – Hurricane Andrew made landfall just south of Miami as a Category 5 hurricane. Several hours later, the hurricane emerged over the Gulf of Mexico at Category 4 strength, with the Gulf Coast of the United States in its projected path.
After weakening slightly, Andrew moved ashore near Morgan City, Louisiana, as low-end Category 3 storm. The effects of land caused the small hurricane to rapidly lose its intensity, and it diminished to a depression by August 27 while crossing Mississippi.
The next day, Andrew merged with a frontal system over the southern Appalachian Mountains. Rainfall continued along the path of Andrew’s remnants through the Mid-Atlantic and Ohio Valley, with precipitation measured as far north as Upstate New York.
Overall, Hurricane Andrew caused $26.5 billion (in 1992 dollars) in damages and claimed 65 lives. 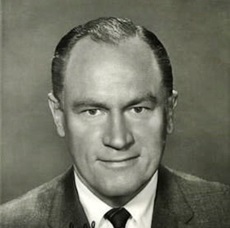 1998 – Actor E.G. Marshall died of lung cancer at the age of 84.
He was best known for his television roles as lawyer Lawrence Preston on The Defenders in the 1960s and as neurosurgeon David Craig on The Bold Ones: The New Doctors in the 1970s.
Among his film roles, he is perhaps best known as the unflappable, conscientious “Juror #4” in Sidney Lumet’s courtroom drama 12 Angry Men. 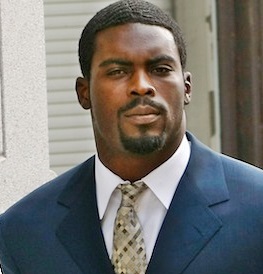 2007 – NFL quarterback Michael Vick pleaded guilty to “Conspiracy to Travel in Interstate Commerce in Aid of Unlawful Activities and to Sponsor a Dog in an Animal Fighting Venture”.
Vick admitted to providing most of the financing for the operation, and to participating directly in several dog fights in Virginia, Maryland, North Carolina and South Carolina.
He further admitted that he knew his colleagues killed several dogs who did not perform well. He admitted to being involved in the destruction of 6–8 dogs, by hanging or drowning.
On December 10, Vick appeared in U.S. District Court in Richmond, VA for sentencing. Judge Henry Hudson said he was “convinced that it was not a momentary lack of judgment” on Vick’s part, and that Vick was a “full partner” in the dog fighting ring, and Vick was sentenced to serve 23 months in federal prison.
He was released on July 20, 2009 and was signed by the Philadelphia Eagles – a decision that caused a media and fan backlash. Vick stayed with the Eagles for five years before spending one season each with the Minnesota Vikings and NY Jets.
He officially retired from professional football in 2017. 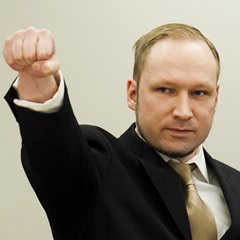 2012 – Anders Behring Breivik, the man who killed 77 people in a July 22, 2011, bombing and shooting attack in Norway was sentenced to 21 years in prison, the maximum allowed under Norwegian law.
Breivik, a 33-year-old right-wing extremist with anti-Muslim views, carried out attacks in Oslo, the nation’s capital, and at a youth camp on the nearby island of Utoya because he wanted to call attention to what he referred to as the “Islamic colonization” of Europe and inspire an uprising against it.
The 2011 massacre began when Breivik detonated a van packed with explosives outside government offices in central Oslo, leaving eight people dead and more than 200 others injured.
Approximately two hours later, Breivik, dressed as a police officer, arrived on Utoya Island, about 25 miles northwest of Oslo, at a summer camp for hundreds of teenagers organized by Norway’s governing Labour Party (whose liberal immigration policies Breivik opposed).
There, he methodically shot and killed 69 people, many of them teens. Some of Breivik’s victims were trying to swim to safety when he gunned them down. More than an hour after the shooting rampage began, law enforcement officers arrived and Breivik surrendered.
Sentencing Factoid: The sentence of life imprisonment under Norwegian law is restricted to the military penal code (e.g., for aiding the enemy during a time of war). In the civilian penal code, a law passed in 2002 allows for an indeterminate penalty (as long as the prisoner is considered a threat to society) that could in theory result in life imprisonment.
I would imagine Breivik is going to fall into that category. 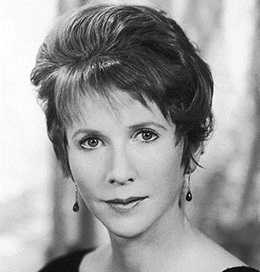 2013 – Actress Julie Harris died of congestive heart failure at the age of 87.
A Broadway virtuoso, Harris was a five-time Tony Award winner (and ten-time nominee), a three-time Emmy Award winner (with eleven nominations), and a nominee for a Best Supporting Actress Award (The Member of the Wedding).
Other films included Requiem For A Heavyweight, East of Eden, Harper, and Reflections In A Golden Eye.
Actor Alec Baldwin may have summed up her life better than anyone. “Her voice was like rainfall. Her eyes connected directly to and channeled the depths of her powerful and tender heart. Her talent, a gift from God.” 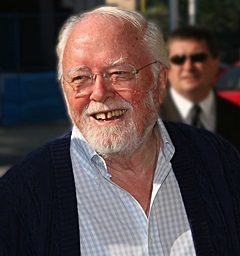 2014 – Lord Richard Attenborough died at the age of 90.
He had been a prolific actor in British films for twenty years before he became a star in America.
In 1963, he appeared The Great Escape as RAF Squadron Leader Roger Bartlett (“Big X”).
In 1965 he co-starred opposite James Stewart in The Flight of the Phoenix.
In 1967 and 1968, he won back-to-back Golden Globe Awards in the category of Best Supporting Actor, the first time for The Sand Pebbles with Steve McQueen, and the second time for Doctor Dolittle alongside Rex Harrison.
He also appeared in Steven Spielberg’s Jurassic Park and the film’s sequel, The Lost World: Jurassic Park.
Attenborough won two Academy Awards for Gandhi in 1983, receiving awards for Best Picture and Best Director.