Last week, in a post commemorating the anniversary of the release date of ‘Sgt. Pepper’s Lonely Hearts Club Band’, Fred Guilmette left a comment … “Where does time go?”.

Elizabeth Karlton followed that up with, “Hey, speaking of time, maybe we should list all the songs that have that word in the lyrics.”

With those two comments as the inspiration, I have compiled a list of songs with “Time” in the title. Yes, I could have added more, but since this “times out” at 46 minutes, I thought that would be long enough.

I hope you enjoy it and now it is time for me to go back on my break. 🙂 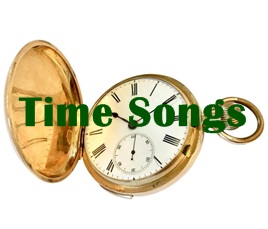