Afterwards they took off for Midway International Airport in Chicago in a Bell 206B helicopter, the most common way for acts to enter and exit the venue as there is only one road in and out, which is heavily used by fans. The helicopter crashed into a nearby ski hill shortly after takeoff.

Vaughan and the four others on board – pilot Jeff Brown, agent Bobby Brooks, bodyguard Nigel Browne, and tour manager Colin Smythe – were all killed. 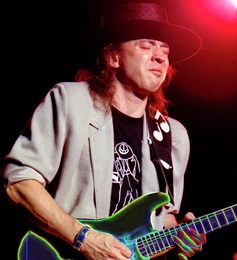 In 2015, Vaughan and Double Trouble (drummer Chris Layton and bassist Tommy Shannon) were finally inducted into the Rock and Roll Hall of Fame. In a ridiculous insult, Vaughan had been eligible for the Rock Hall of Fame in 2008, but did not even appear on a nominations roster until 2014!

If this video doesn’t give you chills, check your pulse.