In 1960, a band called the Four Lovers flunked an audition to play at the cocktail lounge of a bowling alley in Union, NJ, but they did get something out of the experience. They decided the lounge’s name would make a classy moniker for a singing group, and so The Four Seasons were born.

In 1962, the group – featuring 26-year old Frankie Valli, 19-year old keyboardist Bob Gaudio, 24-year old guitarist Tommy DeVito, and 34-year old Nick Massi (later replaced by Joe Long) – recorded a song written by Gaudio that would become their first #1 hit, and also the first of twelve songs (most of them co-written by Gaudio and producer Bob Crewe) released in the 1960s that would reach the Top 10 on Billboard’s Hot 100.

All twelve of those Top 10 songs are included in this medley, and by the way, if you’re expecting to hear Who Loves You and December, 1963 (Oh, What A Night), both of those songs were released in the 70s.

Rock Factoid: Writing songs for The Four Seasons wasn’t Gaudio’s first claim to fame. He was just 15 year old when he co-wrote Short Shorts, a #3 hit in 1958 while a member of the Royal Teens. 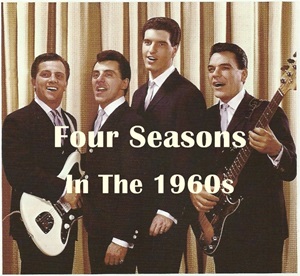