On July 20, 1969, Apollo 11 landed on the moon. Shortly thereafter, Neil Armstrong became the first human to set foot on the surface, followed by Edwin “Buzz” Aldrin.

Dancing In The Moonlight, Mr. Moonlight, Bad Moon Rising, Everyone’s Gone To The Moon and Man On The Moon, but if I had added all those songs, this medley would have lasted longer than the moon mission. 🙂 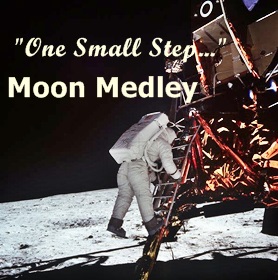