Streamingoldies > Memories Medley > May I Tempt You?

May I Tempt You?

Okay, we just spent four days listening to a wide variety of female singers, but today, it’s time to focus on one of the best-selling male groups of the 60s and 70s, and I am not talking about the Beatles, Rolling Stones, Beach Boys or Chicago.

I’m talking about The Temptations – the quintessential Motown vocal group which placed thirty-seven singles on the Billboard Top 40, with four of them reaching #1.
On the R&B singles chart, the group scored a record seventy-one Top 40 singles, with fourteen of those reaching #1.
The seven songs included in this medley only scratches the surface of their musical output.

While you’re listening, pay attention to the legendary bass guitar work of James Jamerson, a member of Motown’s Funk Brothers house band. In my opinion, he was one of the greatest bass players ever born. 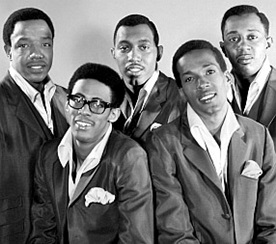