“General Pickett, look to your men and organize for a defense.”
“General Lee, I have no division.” 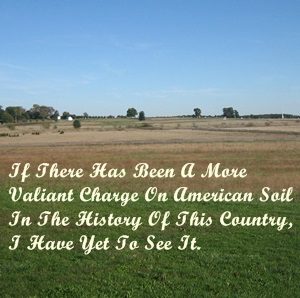 1863 – The Battle of Gettysburg: Day 3 … Confederate Gen. Robert E. Lee was determined to renew the offensive, pinning his hopes to a major assault by Gen. James Longstreet on the Yankee center, while Gen. Richard Ewell’s corps was given three more brigades to continue his assault on the Federal right on Culp’s Hill. 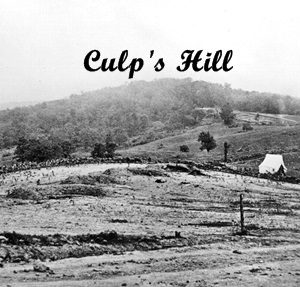 Lee’s plan for a synchronized attack went awry at 4:00 a.m. when Union artillery perched on Baltimore Pike unleashed a skull-pounding, teeth-rattling barrage on the Confederates. What followed was some of the fiercest – but largely ignored – fighting of the Gettysburg campaign.
Union and Confederate forces engaged in seven hours of sustained close combat as the two armies battled back and forth; each gaining ground and then losing it.
At 11:00 a.m., the exhausted Confederate troops retreated across Rock Creek. 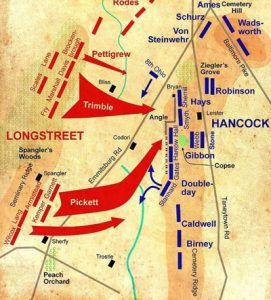 Pickett’s Charge: Although the assault is known to popular history as Pickett’s Charge, overall command was given to Gen. James Longstreet, and Pickett was one of his divisional commanders.
Longstreet thought the plan was futile and only reluctantly agreed to it, telling Lee “no 15,000 men who ever lived could take that position.”
His words went unheeded.
The assault was preceded by an artillery bombardment of 150 Confederate guns under the command of corps artillery chief Col. Edward Porter Alexander. It was the largest grand battery ever assembled on the North American continent, which began firing at 1:00 in the afternoon.
Approximately 75 Union cannons responded. To add to the hellish roar and whine of the missiles, the smoke from the bombardment soon enveloped the entire valley. 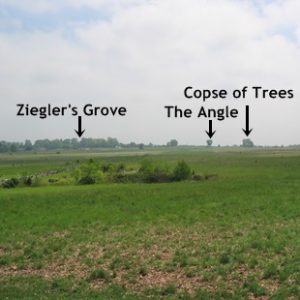 At 3:00, as if on dress parade, the entire Confederate command of approximately 13,000 – three full divisions and well over a mile wide – dressed its lines. Fifty stands of colors were unfurled to the enemy. Ahead (shown in the photo above, from the Confederates’ point of view) lay 4,000 yards of Pennsylvania farmland – interwoven with fences – that rose to the crest of the Cemetery Ridge.
Near the Emmitsburg Road, Pettigrew’s men came under fire on their left flank from the 8th Ohio and 126th New York regiments. On command, 400 rounds of .58-caliber slugs slammed into the attackers, dropping hundreds. An audible groan arose from the Confederate ranks, loud enough to be heard over the battle noise.
On the right flank, Pickett’s Virginians crossed the Emmitsburg road and wheeled partially to their left. They marched in two lines, led by the brigades of Brig. Gen. James L. Kemper and Brig. Gen. Richard B. Garnett.
As the division wheeled to the left, their right flank was exposed. Brigadier General George J. Stannard’s Vermont Brigade marched forward and delivered a hail of fire into Kemper’s brigade, wounding Kemper in the process.
As Pickett’s men advanced, they withstood a wave of defensive attacks before approaching a minor salient in the Union center, a low stone wall taking an 80-yard right-angle turn, known forever as “The Angle.”
In what would become known as the High Tide of the Confederacy, Brig. Gen. Lewis Armistead penetrated the Federal line at The Angle but soon fell mortally wounded. 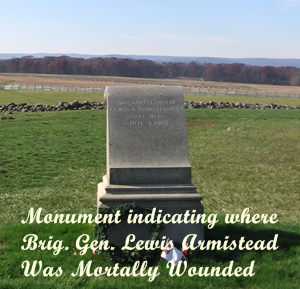 It was no longer about cause or politics. It was simply kill or die. Of those Confederate troops who actually made it to the Angle for a brief time, the casualty rate was 70 percent.
What was left of Lee’s proud army started a slow retreat, back across that field of hell, now littered with the bodies of their comrades.
In less than an hour, more than 5,500 Confederate troops had been killed or wounded. The Union had lost 1,500.
The Battle of Gettysburg was over. It had cost the Union 23,000 killed, wounded, or missing in action. The Confederates suffered 28,000 casualties.
The video below describes the day’s actions and the aftermath of that ferocious battle. 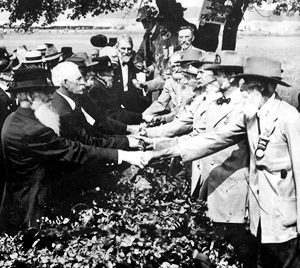 1913 – Confederate veterans at the Great Reunion of 1913 reenacted Pickett’s Charge; upon reaching the high-water mark of the Confederacy, they were met by the outstretched hands of friendship from Union survivors. 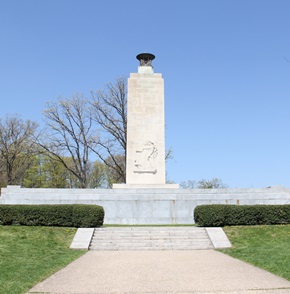 1938 – Veterans of the Union and Confederate armies from across the nation converged on Gettysburg in 1938 – 75 years after the battle – for their last great reunion.
All Civil War veterans were invited with expenses paid, and nearly 2,500 attended. The majority were in their 90s, and many were over 100.
President Franklin D. Roosevelt dedicated the Eternal Light Peace Memorial and lit the eternal flame at Gettysburg Battlefield.
The memorial’s base is made of Maine granite, while the shaft is of a lighter colored Alabama limestone; quite fitting when you remember it was those two states who were locked in mortal combat against each other at the Battle of Little Round Top. 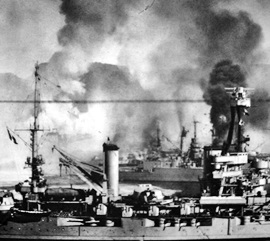 1940 – To stop ships from falling into German hands, the French fleet of the Atlantic based at Mers El Kébir, was bombarded by the British fleet, coming from Gibraltar, causing the loss of three battleships: Dunkerque, Provence and French battleship Bretagne. 1,200 sailors perished.
But there was a good reason.
France, the only continental ally of Britain, had been replaced by a government administered from Vichy – perceived by the British as a puppet state of the Nazi regime – which had inherited the French navy.
The British War Cabinet feared that France would hand the ships to the German navy, giving the Axis assistance in the Battle of the Atlantic.
Admiral François Darlan, commander of the French Navy, promised the British that the fleet would remain under French control but Winston Churchill and the War Cabinet judged that the fleet was too powerful to risk an Axis take-over. 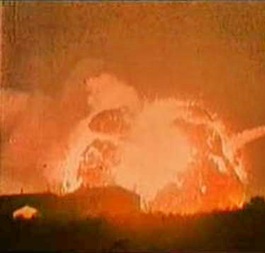 1969 – The Soviet Union’s dreams of a moon mission went up on the launch pad as the N-1 rocket crashed back onto its launch pad shortly after liftoff and exploded, resulting in one of the largest artificial non-nuclear explosions in human history.
The 5 stage monster rockets were 344 feet tall and almost 56 feet in diameter. Investigation showed that a loose bolt was sucked into an oxygen pump causing the rocket motors to automatically shut down and the rocket to fall from its maximum lift off of nearly 700 feet. 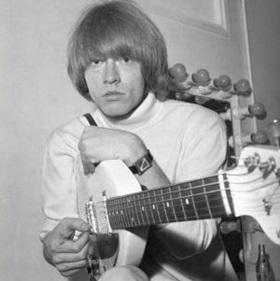 1969 – Rolling Stones founder and guitarist Brian Jones was found dead of an apparent accidental drowning.
A gifted multi-instrumentalist, Jones had been fired by Mick Jagger and Keith Richards on June 8, and a little more than three weeks later, the 27-year-old was found dead at the bottom of the swimming pool at his home in Sussex, formerly owned by Winnie-the-Pooh author A. A. Milne.
Rumors of foul play would persist for years among fans and conspiracy buffs, but the coroner, while noting Jones’ liver and heart were heavily enlarged by drug and alcohol abuse, handed in a ruling of “Death by misadventure.” 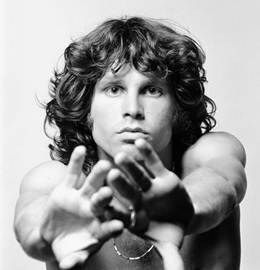 1971 – Jim Morrison, the charismatic – and controversial – front man of the iconic 1960s group The Doors, was found dead in the bathtub of his Paris apartment. He was 27.
Because no evidence of foul play was found at the scene, no autopsy was conducted, and “heart failure” was cited as the cause of death. His gravesite in Père Lachaise Cemetery in Paris is one of the city’s most visited tourist attractions. 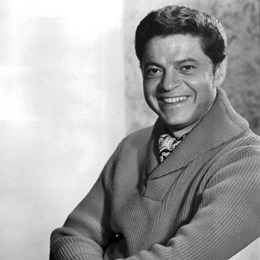 1981 – Ross Martin, an actor who played many “character” roles in his early career but is best known for portraying Artemus Gordon on The Wild Wild West, died of a heart attack at the age of 61. 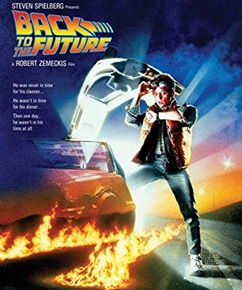 1985 – Back To The Future premiered in theaters across the U.S.
The film, which starred Michael J. Fox and Christopher Lloyd, was filmed on a budget of $19 million and went on to gross $211 million in North America and $178 million in foreign countries, accumulating a worldwide total of $389 million
The film’s success led to two film sequels: Back to the Future Part II in 1989 and Back to the Future Part III in 1990. 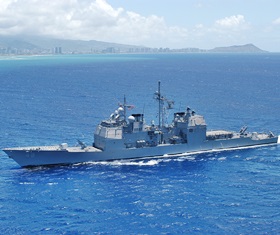 1988 – In the Persian Gulf, the U.S. Navy cruiser Vincennes shot down an Iranian passenger jet that it mistook for a hostile Iranian fighter aircraft. Two missiles were fired from the American warship and all 290 people aboard were killed.
Minutes before Iran Air Flight 655 was shot down, the Vincennes had engaged Iranian gunboats that shot at its helicopter.
The attack came near the end of the Iran-Iraq War, when U.S. vessels were in the gulf defending Kuwaiti oil tankers. U.S. officials defended the action, claiming that the aircraft was outside the commercial jet flight corridor, flying at only 7,800 feet, and was on a descent toward the Vincennes.
However, one month later, U.S. authorities acknowledged that the airbus was in the commercial flight corridor, flying at 12,000 feet, and not descending. The U.S. Navy report blamed crew error caused by psychological stress on men who were in combat for the first time.
In 1996, the U.S. agreed to pay $62 million in damages to the families of the Iranians killed in the attack. 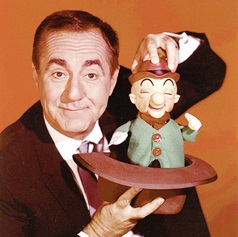 1988 – Actor Jim Backus died after suffering from Parkinson’s disease for many years. He was 76.
Backus was the famous voice of nearsighted cartoon character Mr. Magoo, a domestic court judge on TV’s I Married Joan, James Dean’s father in Rebel Without A Cause (a rare dramatic role), and of course, Thurston Howell III on the 1960s sitcom Gilligan’s Island. 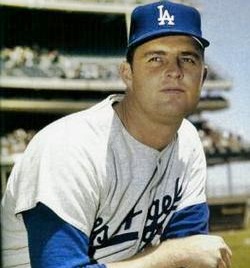 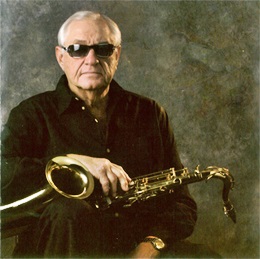 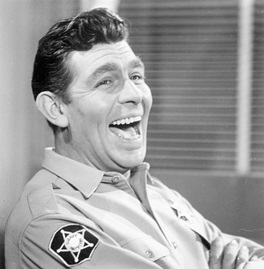 2012 – Actor Andy Griffith, forever remembered as Sheriff Andy Taylor on The Andy Griffith Show, died of a heart attack at the age of 86.
Griffith’s early career included both comedy (No Time For Sergeants, Onionhead) and drama (A Face In The Crowd), but it was his portrayal of the homespun sheriff of Mayberry, NC that became his legacy.
Following the series 8-year run, Griffith appeared in many television films, including Pray for the Wildcats, which marked his first villainous role since A Face In The Crowd. Griffith appeared again as a villain in Savages.
His role as the father of a murder victim in the television film Murder In Texas, and another role as a homicidal villain in the television film Murder in Coweta County won him high acclaim.
After spending seven months in rehabilitation for leg paralysis from Guillain–Barré syndrome in 1983, Griffith returned to television as the title character of Ben Matlock in the legal drama Matlock for nine years.
Griffith Factoid: In the combined 17 years of The Andy Griffith Show and Matlock, Andy Griffith was never nominated for an Emmy Award.

This is the final history lesson until September.