“The most important thing is to live a fabulous life. As long as it’s fabulous I don’t care how long it is. If I die tomorrow I will not regret. I really did everything I could. What will I be doing in 20 years time? I’ll be dead, darling! Are you crazy?”
~Freddie Mercury 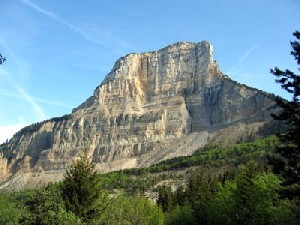 1248 – In the middle of the night, a mass on the north side of Mont Granier in France suddenly collapsed, causing one of the largest historical rock slope failures known in Europe.
A mass of limestone resting on calcium carbonate slid into the valley, causing a massive landslide that completely destroyed five villages and caused over a thousand casualties, although the numbers are still debated. The event created the sheer north face of the mountain. 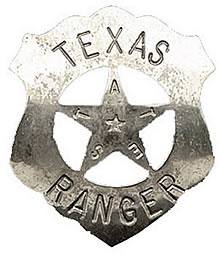 1835 – The Texas Provincial Government authorized the creation of a horse-mounted police force to be called Texas Rangers.
The authorization called for three companies of Rangers, 56 men to the company, each commanded by a captain, first and second lieutenants, with a major in command.
The privates received $1.25 per day for “pay, rations, clothing, and horse service.” 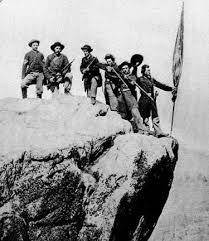 1863 – Union troops captured Lookout Mountain southwest of Chattanooga, Tennessee.
In the “battle above the clouds,” the Yankees scaled the slopes of the mountain on the periphery of the Chattanooga lines. The fog masked the Union advance and Yankee General Joseph Hooker’s men climbed relatively easily.
The 1,200 Confederates suddenly faced nearly 12,000 attacking Yankees and abandoned the mountain by late afternoon. 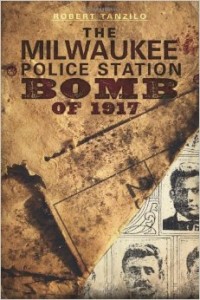 1917 – Nine members of the Milwaukee Police Department were killed by a bomb, the most deaths in a single event in U.S. police history until the September 11 attacks in 2001.
The bomb, wrapped as a package, had been left outside the Italian Evangelical Church in downtown Milwaukee and brought to the police station for inspection when it detonated. Also killed was Catherine Walker, who had come to the station with a complaint against her boyfriend.
The culprits were never caught, but police linked the bombing to a group of anarchists who were seeking revenge against the pastor of the church that had been targeted. 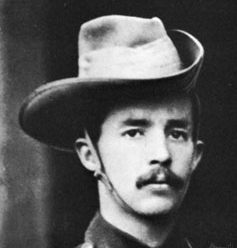 1922 – Robert Erskine Childers, a popular Irish author (The Riddle Of The Sands) and member of the Irish Republican Army, was shot to death (along with 8 others) by an Irish Free State firing squad after being convicted of carrying a revolver.
He had been one of the leaders, along with Eamon de Valera, of the Republican forces in the Irish Civil War that followed the partition of Ireland in 1921.
Before his execution, in a spirit of reconciliation, Childers shook hands with each of the firing squad.
His last words, spoken to them, were in the nature of a joke: “Take a step or two forward, lads. It will be easier that way.” 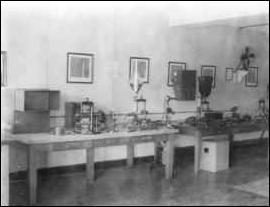 1932 – The crime lab that is now referred to as the FBI Scientific Crime Detection Laboratory officially opened in Washington, DC.
The “lab” operated out of a single room and had only one full-time employee, Agent Charles Appel.
Agent Appel began with a borrowed microscope and not much else. In fact, J. Edgar Hoover, the head of the FBI, provided the lab with very few resources and used the “cutting-edge lab” primarily as a public relations tool. 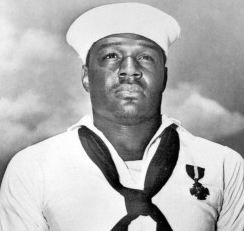 1943 – The USS Liscome Bay was struck in the stern by a torpedo from the Japanese submarine I-175. The aircraft bomb magazine detonated a few moments later, causing the ship to sink within minutes. Of the 916 crewmen, only 272 were rescued.
One of those lost was Cook Third Class Dorie Miller, noted for his bravery during the attack on Pearl Harbor in 1941.
For his heroic actions that day, he was the first African American to be awarded the Navy Cross, the second highest honor awarded by the U.S. Navy after the Medal of Honor. 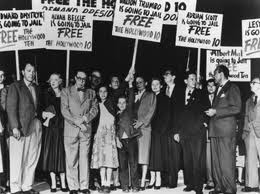 1947 – The House of Representatives voted 346 to 17 to approve citations of contempt against 10 Hollywood writers, directors, and producers.
The “Hollywood 10,” as the men were known, were sentenced to one year in jail. The Supreme Court later upheld the contempt charges.
The contempt charges stemmed from the refusal of the 10 men to answer questions posed by the House Un-American Activities Committee as to whether they were or had ever been members of the Communist Party.
The chairman of HUAC, J. Parnell Thomas, dismissed the arguments raised by the men, claiming that Congress had every right to ask people what their political affiliations were.
“The Constitution,” he declared, “was never intended to cloak or shield those who would destroy it.” 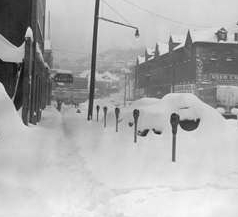 1950 – The Great Appalachian Storm of November 1950 moved through the Eastern United States, causing significant winds and blizzard conditions.
Hurricane-force winds, peaking at 110 miles per hour in Concord, NH and 160 miles per hour in the New England highlands, disrupted power to 1 million customers during the event.
In all, the storm impacted 22 states, killing 353, injuring over 160, and creating $66.7 million in damage (1950 dollars).
At the time, U.S. insurance companies paid more money out to their policy holders for damage resulting from the cyclone than for any other previous storm or hurricane. 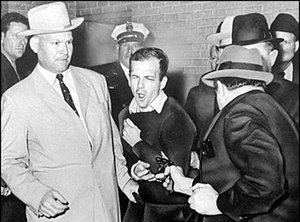 1963 – Lee Harvey Oswald, the alleged assassin of President John F. Kennedy, was shot by Jack Ruby, a Dallas nightclub owner, in the basement of the Dallas police station.
Oswald had been brought to the basement on his way to a more secure county jail. A crowd of police and press with live television cameras rolling gathered to witness his departure.
As Oswald came into the room, Ruby emerged from the crowd and fatally wounded him with a single shot from a concealed .38 revolver. The bullet struck several organs, penetrating Oswald’s stomach and aorta.
He was taken unconscious by ambulance Parkland Memorial Hospital – the same hospital where doctors tried to save President Kennedy’s life two days earlier. Oswald died two hours after being shot.
Ruby – who was immediately detained – features prominently in Kennedy-assassination theories, and many believe he killed Oswald to keep him from revealing a larger conspiracy.
Ruby denied the allegation and pleaded innocent on the grounds that his great grief over Kennedy’s murder had caused him to suffer “psychomotor epilepsy” and shoot Oswald. 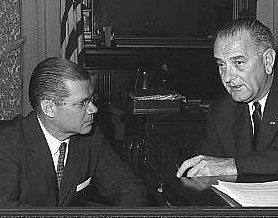 1963 – Two days after the assassination of John F. Kennedy, President Lyndon Johnson announced his intention to continue U.S. military and economic support to South Vietnam.
He instructed Ambassador Henry Cabot Lodge, in Washington for consultations following South Vietnamese President Ngo Dinh Diem’s assassination, to communicate his intention to the new South Vietnamese leadership. Johnson’s first decision about Vietnam was to – in his words – continue Kennedy’s policy.
Historians disagree on whether Vietnam would have escalated had Kennedy survived and been re-elected in 1964. Fueling the debate are statements made by Secretary of Defense McNamara in the film The Fog Of War that said Kennedy was strongly considering pulling out of Vietnam after the 1964 election.
The film also contains a tape recording of Lyndon Johnson stating that Kennedy was planning to withdraw, a position that Johnson disagreed with.
Kennedy had signed National Security Action Memorandum 263, dated October 11, which ordered the withdrawal of 1,000 military personnel by the end of the year.
Just days before leaving for Dallas, Kennedy told Michael Vincent Forrestal, one of the leading aides to McGeorge Bundy, the president’s national security adviser, that, “after the first of the year [he wanted] an in depth study of every possible option, including how to get out of there.” 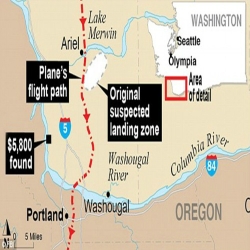 1971 – A hijacker calling himself D.B. Cooper commandeered a Northwest Orient Airlines 727 shortly after takeoff, showing a flight attendant something that looked like a bomb and informing the crew that he wanted $200,000, four parachutes, and “no funny stuff.”
The plane landed at Seattle-Tacoma International Airport, where authorities met Cooper’s demands and evacuated most of the passengers. Cooper then demanded that the plane fly toward Mexico at a low altitude and ordered the remaining crew into the cockpit.
As the plane flew over the Lewis River in southwest Washington, the plane’s pressure gauge recorded Cooper’s jump from the aircraft.
Wearing only wraparound sunglasses, a thin suit, and a raincoat, Cooper parachuted into a thunderstorm with winds in excess of 100 mph and temperatures well below zero at the 10,000-foot altitude where he began his fall.
The storm prevented an immediate capture, and most authorities assumed he was killed during his jump.
No trace of Cooper was found during a massive search, but in 1980, a young boy, vacationing with his family on the Columbia River about 9 miles downstream from Vancouver, WA, uncovered three packets of the ransom cash ($5,800), significantly disintegrated but still bundled in rubber bands. 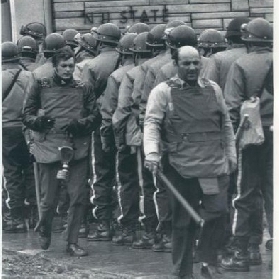 1971 – On Thanksgiving Day, five hundred inmates at Rahway State Prison (now East Jersey State Prison) held six hostages, including the warden, for 24 hours.
Six officers were injured, three with stab wounds in the early hours of the riot.
The inmates demanded a more sufficient diet, regulation of commissary prices, improvement of the educational system and vocation training, better discipline of officers, and additional medicine supplies including aspirin.
Ultimately, the prison was retaken with no loss of life and the captives were set free without the use of firearms. 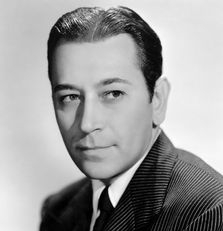 1980 – Actor George Raft died from leukemia at the age of 79.
One of the most popular gangster actors of the 1930s and 40s, Raft starred in Scarface, The Bowery, If I Had A Million, Invisible Stripes, and Each Dawn I Die. 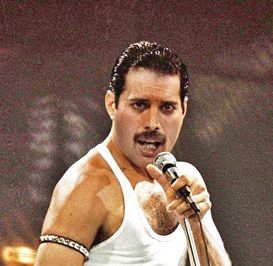 1991 – Freddie Mercury of Queen died at the age of 45. The cause of death was bronchial pneumonia resulting from AIDS.
Regarded as one of the greatest lead singers in the history of rock music, he was known for his flamboyant stage persona and four-octave vocal range.
Mercury’s funeral service was conducted on November 27 at West London Crematorium. In attendance at Mercury’s service were his family and 35 of his close friends, including Elton John and the members of Queen.
In accordance with Mercury’s wishes, Mary Austin, his longtime companion, took possession of his cremated remains and buried them in an undisclosed location.
The whereabouts of his ashes are believed to be known only to Austin, who has said that she will never reveal them. 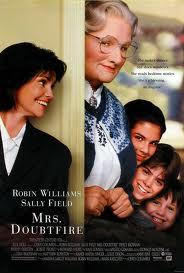 1993 – Mrs. Doubtfire, starring Robin Williams as a divorced father who disguised himself as an elderly British nanny in order to spend time with his children, opened in theaters.
Based on a 1987 novel by Anne Fine titled Alias Madame Doubtfire, the film co-starred Sally Field, Harvey Fierstein and Pierce Brosnan. 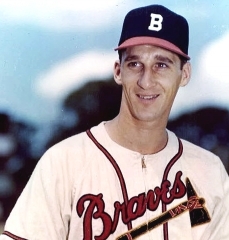 2003 – Baseball Hall of Fame pitcher Warren Spahn died of natural causes at the age of 82.
Spahn won 363 games, more than any other left-handed pitcher in history, and had thirteen seasons with 20 wins or more, including a 23–7 record when he was 42. 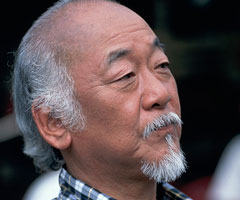 2005 – Actor Noriyuki “Pat” Morita died of kidney failure at the age of 73.
He played the roles of Matsuo “Arnold” Takahashi on Happy Days and Keisuke Miyagi in the Karate Kid movie series, for which he was nominated for an Academy Award for Best Supporting Actor in 1984. 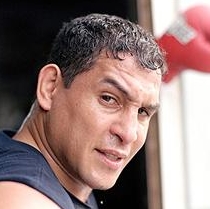 2012 – Hector Camacho, known to most boxing fans as “Macho” Camacho, died four days after being shot while sitting in a car outside a bar in his native Puerto Rico.
Camacho held, at various times in his career, the super featherweight, lightweight, and junior welterweight world titles. 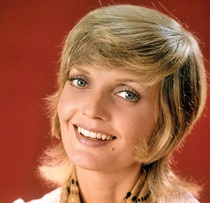 2016 – Actress Florence Henderson died of heart failure at the age of 82.
She is best remembered for her starring role as Carol Brady on the ABC sitcom The Brady Bunch from 1969 to 1974 and a lengthy list of Brady sequels.