July 30 has delivered some special musical memories through the years. There was a debut recording by a future Hall of Fame singer, an unusual way to hit #1 on the charts, a legend took a stance and paid a heavy price, a British band kept rolling along in England (but remained unheard in the U.S.), and “The Boss” made a comeback for the ages. 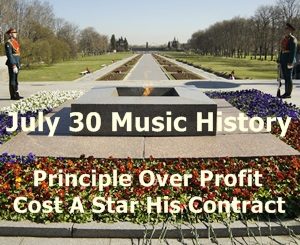 On July 30, 1955 (65 years ago today!), Johnny Cash recorded Folsom Prison Blues at the Sun Studio in Memphis.
The producer was Sam Phillips, and the musicians were Cash (vocals, guitar), Luther Perkins (electric guitar), and Marshall Grant (bass).
Like other songs recorded during his early Sun Records sessions, Cash had no drummer in the studio, but replicated the snare drum sound by inserting a piece of paper under the guitar strings and strumming the snare rhythm on his guitar.
The song – which was part of his debut album (With His Hot and Blue Guitar) – was released as a single with another song recorded at the same session, So Doggone Lonesome.
Early in 1956, both sides reached #4 on the Billboard Country & Western Best Sellers chart.
A live version, recorded among inmates at Folsom State Prison itself, became a #1 hit on the country music charts in 1968.

On July 30, 1966 (54 years ago today!), the Troggs started a two week run at #1 on the Billboard Hot 100 chart with Wild Thing, a song they recorded in one complete take at Olympic Studios in London.
But it wasn’t the most normal situation.
Because of a distribution dispute, the single was available on two competing labels: Atco and Fontana. Because both pressings were taken from the identical master recording, Billboard combined the sales for both releases, making it the only single to simultaneously reach # 1 for two companies.
For the “record” (pun intended), the solo in the middle of the song was not a flute or a recorder, as most of the world thought. The sound came instead from an ocarina, a small, circular clay musical pipe – with a sound like an earthy flute – that is usually held in the palm of your hand.

On July 30, 1986 (34 years ago today!), John Denver was dropped from his contract with RCA following the release of Let Us Begin (What Are We Making Weapons For?), a single that ended the singer’s 17-year association with the label.
In addition to his writing and recording career, John Denver was a political activist, and in 1985 when he toured the Soviet Union, he was moved greatly by a visit to the Piskaryovskoye Memorial Cemetery where 420,000 civilians and 70,000 soldiers – all victims of the Siege of Leningrad (1941-1944) – are buried in 186 mass graves.
He also met Alexander Gradsky, the leading singer-songwriter in Russia, and the following year at the Melodiya Studios in Moscow, they recorded this anti-war number, from both U.S. and Soviet perspectives.
Denver commissioned a short film for the song, which was put together from archive footage. This is believed to have been the first time an American and Soviet artist had performed together in a music video.
As well as sharing the vocals with Gradsky, the recording included the Red Army Chorus “to go behind the spirit and the meaning” of the song.
The song precipitated a split between Denver and his record company RCA, which had recently been acquired by General Electric, one of the largest defense contractors in the U.S.
Denver said the song and the video were the best pieces of work that he had ever produced in his career.
“The fact that I spent so much time pushing a song that was five-and-a-half minutes long and wasn’t going to be a hit record hurt my relationship with RCA,” he said. “I knew I was risking everything but I have no regrets.”
Postscript: The single failed to chart in the U.S.
Denver never hit the Top 40 again. In fact, his only charting song (Country Girl In Paris in 1988) peaked at #96, the only time he would hit the Billboard Hot 100 for the rest of his career.

On July 30, 1991 (29 years ago today!), Status Quo recorded Rock ‘Til You Drop in London.
The song was included on the album of the same name and was released as a single in 1992. It reached #38 in the UK but like most Quo songs over the past 50 years, was not released in the U.S.
Long considered to be a “One-Hit Wonder” in America (Pictures of Matchstick Men in 1968), Status Quo has hit the UK Top 40 an astounding sixty-one times; that’s more than the Rolling Stones, Queen, Beatles, and Bee Gees. To be more accurate, it’s more than any other band in history.
And they have also achieved a career total of 27 UK Top Ten albums.
Pretty damn good for a “one-hit wonder”.

On July 30, 2002 (18 years ago today!), Bruce Springsteen released The Rising album, his first studio album with the E Street Band in eighteen years.
Based in large part on Springsteen’s reflections during the aftermath of the September 11, 2001 attacks, the album predominantly centered upon themes of relationship struggles, existential crisis and social uplift.
Upon its release, The Rising became Springsteen’s first to top the Billboard Top 200 Album chart since 1987. It also won a Grammy Award for Best Rock Album in addition to being nominated for the Album of the Year.
The title song won Grammy Awards for Best Rock Song and Best Male Rock Vocal Performance, as well as a nomination for Song of the Year.
If this video doesn’t put chills down your spine,
You Have Forgotten.