February 8 was a bittersweet day in rock and roll history. On the positive side, we had a chart-topping release from Motown, a debut recording from a future Rock & Roll Hall of Fame singer, and the first George Harrison song to break the Lennon-McCartney griphold on Beatle singles when it became the B-side to Lady Madonna.
On the sad side, we have the last recording ever made by a Hall of Fame legend, and an award for the final song ever recorded by a legend who should be in the Hall of Fame.

What Happened On February 8?

1965 – The Supremes released a #1 single
1965 – Donovan made his recording debut
1968 – The Beatles recorded a George Harrison song (in reality George was the lone Beatle on the record except for John and Paul providing harmony vocals on the last line of the song)
1990 – Del Shannon, suffering from severe depression, took his own life two days after recording this song (which featured Jeff Lynne and Tom Petty & The Heartbreakers as “the band”)
2015 – Glen Campbell’s final recording won a Grammy Award for Best Country Song (and that song featured several of his former colleagues in The Wrecking Crew: 78-year old Joe Osborn on bass, 78-year old Don Randi on piano, and 86-year old Hal Blaine on drums) 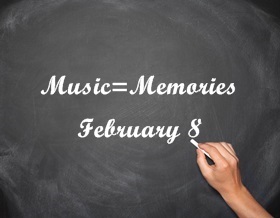